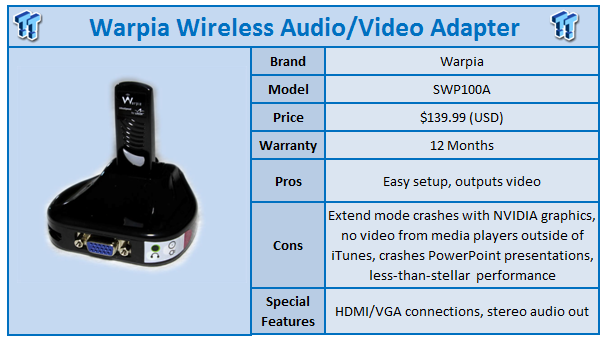 The idea of outputting content from a PC to a TV has become somewhat limited in its usefulness, what with all the media boxes and Blu-ray players with Netflix, Blockbuster, Pandora and all the other apps that allow you to easily consume your online and digital media content.

Take my current setup for example; I can watch the aforementioned online services as well as movies in a wide variety of formats and even DRM'd iTunes content. The only thing I can't do is show PowerPoint slides, watch Hulu (though if you have a PS3 or Blu-ray player with the option to install such an app, you can make that happen), or play any of my Steam games on the big screen.

Granted it's a small list, but every now and then I run across some media that won't play on one of my devices (that the VideoLAN media player handles with ease) and having the ability to wirelessly stream to a TV can come in handy at times, so I was hoping the Warpia PC-to-TV wireless adapter would be an easy-to-use and powerful device that would provide such a feature. 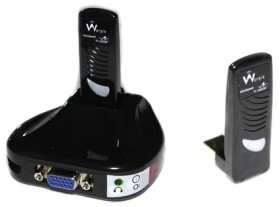 Installation is simple. Pop in the CD and you get the option to either install the drivers that came with the unit or to go online to the Warpia website where you can download the latest version. It's always a good idea to install the latest version of any driver, so off to the Internet I went. Once the drivers finished downloading, I installed them and was then prompted to disconnect the USB dongle that was plugged into my laptop (oops!). Doing so allowed the installation to continue and at the end I was prompted with the option to update the firmware in both the receiver and the transmitter. Plugging each into the USB port in turn, they were updated quickly and, after running through the Windows "new device detected" process, I had access to my desktop on my television. 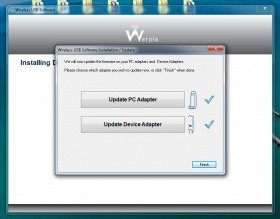 The first thing I noticed was that the edges of my desktop were extended beyond the television screen. My Sony VAIO has an HDMI port already, so I'm no stranger with outputting my laptop to the television. Using the laptop's built-in port I have the ability to resize the desktop in order to have it appear correctly on the TV display. I was given no such options with the Warpia adapter. It's a "take it or leave it" proposition. To be fair, it wasn't much of a problem as the cropping is pretty light, and when watching full screen video it's not an issue at all. 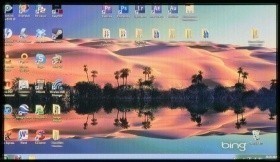 As far as playing Steam games on my TV, Warpia makes it clear that games do not work with the wireless adapter and I can attest to that fact. I got nothing at all when I tried it. A shame, but nothing I wasn't already prepared for. The transmitting power only works up to a distance of 30 feet according to the documentation, and will not work through walls. I checked this out and it holds true. Rounding a corner in my small apartment, I instantly lost the connection. I had no problems otherwise during my testing, but the adapter is clearly meant for in-room operation only.

According to the documentation, watching video is best done in the "Extended" view mode, which means that the television acts as a second monitor and thus doesn't duplicate what you see on your desktop. All of my PCs use an NVIDIA graphics chipset, so I don't know about those with ATI or Intel graphics adapters, but this mode was unusable on my NVIDIA 330M display. Playing video of any kind using the "Extended" view mode would result in a Blue Screen of Death (BSOD) after only a few seconds in. 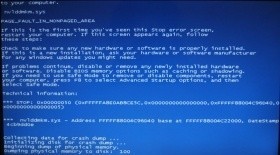 Playing Hulu and YouTube in "mirrored" mode (where the desktop and TV reflect the same screen) worked fine, though there's a noticeable lag in the video, even on standard definition clips. It's more pronounced in HD, but even though the video is watchable, I found the dropped frames to be annoying. Audio is transmitted in stereo only, so forget about using the HDMI connection to stream surround sound to your audio receiver. 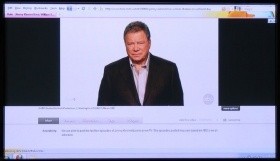 iTunes audio and video played fine, but video performance on iTunes was even worse than the streaming Internet video, even though all of the clips I tried were encoded for the iPhone, which is less than even full SD resolution. Outside of iTunes, nothing else would show video on either the desktop or the laptop. I tried a wide variety of files from 720p resolution MKVs to SD Xvid encodes and nothing would display. I tried both Windows Media Player and VideoLAN to no effect.

Disconnecting the Warpia adapter allowed the videos to play normally. I even used Cyberlink PowerDVD 10 to attempt to play a regular DVD movie, and I would hear audio but get no video. Even worse, PowerDVD crashed every single time I tried to close it, something that only happened while the Warpia adapter was plugged in.

I can accept that the Warpia wireless adapter might not be exactly engineered to help supplement your home theater viewing. The lack of HDMI surround sound compatibility and its inability to stream games seems to point in that direction. Since it transmitted my desktop and Internet browsing/videos just fine, I felt I should at least try it on a typical PowerPoint presentation.

I downloaded a very basic sample file and setup the presentation under PowerPoint for both the "Mirror" and "Extended" modes (I tried Extended again since I would not be playing video and that's the only time it would BSOD on me). Running the show caused PowerPoint 2010 to display a black window and then freeze up, necessitating a quick trip to the Task Manager in order to regain control of my machine.

Finally, with the drivers installed, you lose the ability to see the advanced features of the Windows Aero theme. Like that transparency and 3D task swapping? You have to completely uninstall the drivers in order to get that back, where it should have just been a simple matter of unplugging the USB transmitter.

One of the key tips into maintaining a solid running PC is to stay updated with your Windows updates and drivers. My VAIO is maintained that way and is running the absolutely latest at everything, including the NVIDIA display drivers. As mentioned at the beginning, I even used the option to install the latest drivers from the Warpia website in order to make sure that any and all fixes were sure to be incorporated. Again, it could just be that there's some kind of incompatibility between the NVIDIA drivers/graphics adapter and the Warpia, but given my experience on the hardware I'm stuck with using, I found the Warpia wireless transmitter to be a frustrating and limiting experience.

The bottom line is this: stay away from this device unless you have the ability to test it on your hardware and find that it works without problems. Even then, the slow video performance and lack of game support means that the Warpia Audio/Video Wireless Adapter is still very limited when it comes to useful situations.