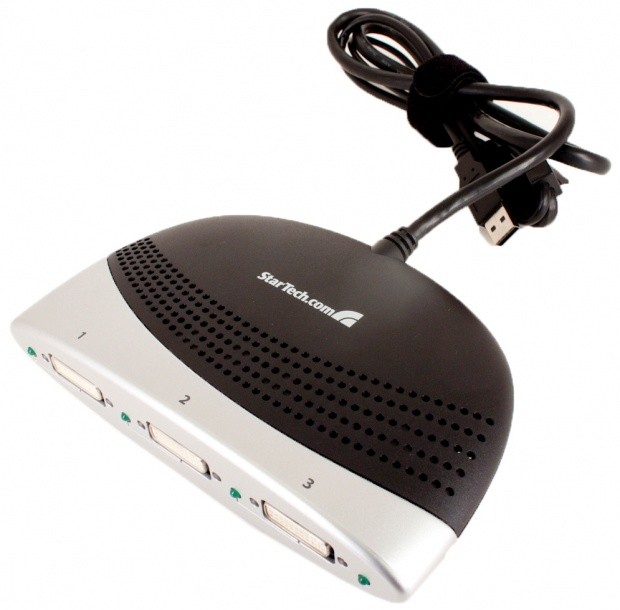 One of the things that has returned to popularity over the last few year has been the use of multiple monitors in the home. In business this has been a standard for quite some time. In fact, most of the companies that I have run the IT department for have used multiple monitors (at the very least for their accounting and sales departments). It allows you more room and to also run multiple "full screen" applications at once.

Of course, this is usually talking about dual monitors and not getting into the more extravagant world of triple and quad monitors. The problem is that in many cases unless you want to spend more money to get a GPU like AMD's Eyefinity and Display Port capable monitors, you are not going to get three or more monitors running. Well, that, as we said, is usually the case anyway.

Recently we happened upon a product that gets around all of that through the use of active video splitting to take the input from a single DisplayPort connection and send it out to three DVI capable monitors. Manufactured by StarTech, the ConvergeAV uses an Active DisplayPort connection to convert the video signal from ANY graphics card into three outputs. The ConvergeAV is not cheap, though; it retails for around $300 when we could find it online. Still, let's see if this can really do the same job as an Eyefinity setup, or is this just a neat gadget.

The box that we received was not the full retail box. This one was certainly meant more for the press than what a real consumer would see. As such, we will not dwell on the outside but will dive straight into what was inside the box. We will note that the contents were packaged up very well and certainly would have handled rough shipping well. 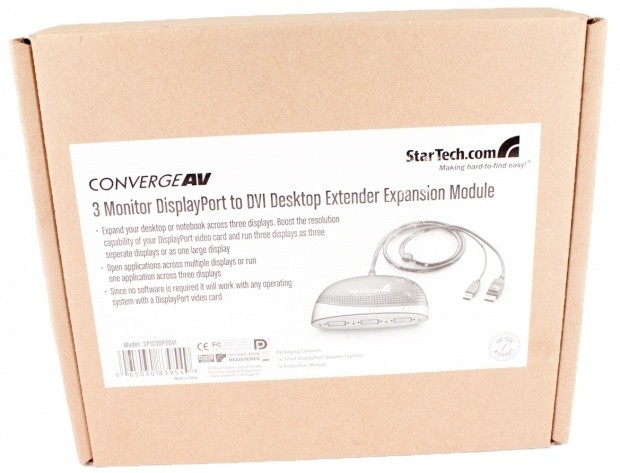 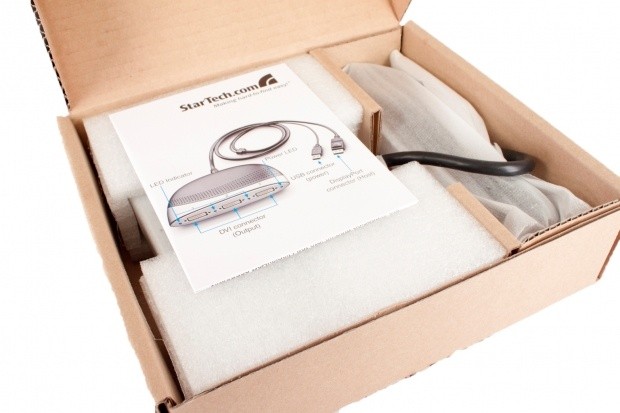 Inside the box was not much more than a quick start guide and the actual ConvergeAV. This means that all of the $300 you spend is inside the device. 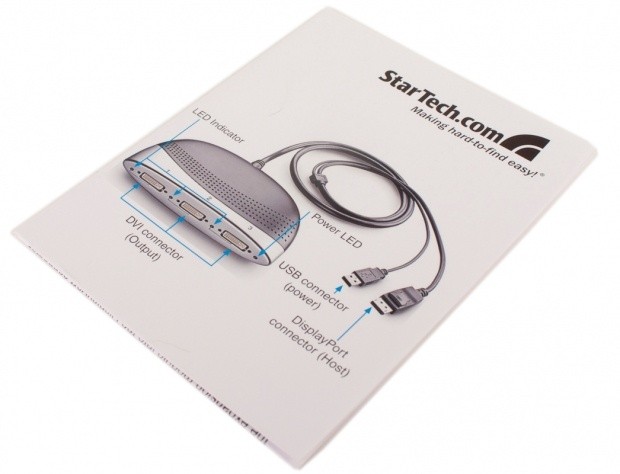 The ConvergeAV is a rather blocky item. It is shaped like a... well.... like a deformed half circle that tapers out at the edges. 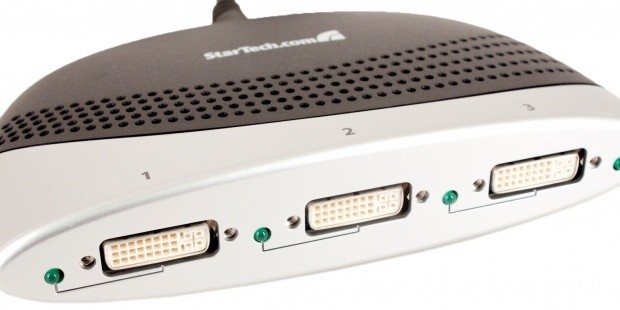 The ConvergeAV is an active splitter. That means that it provides power to the connection in order to ensure there is no (or minimal) signal loss. This power is provided via a USB 2.0 connection. 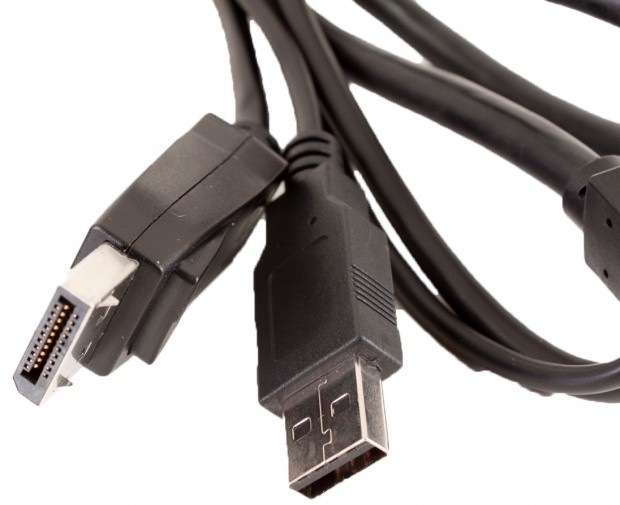 The bottom of the device shows us the model number (SP123DP2DVI) and a few regulatory logos. We also see that it is well ventilated. We hope this is not an indication that it needs this type of cooling to keep stable. 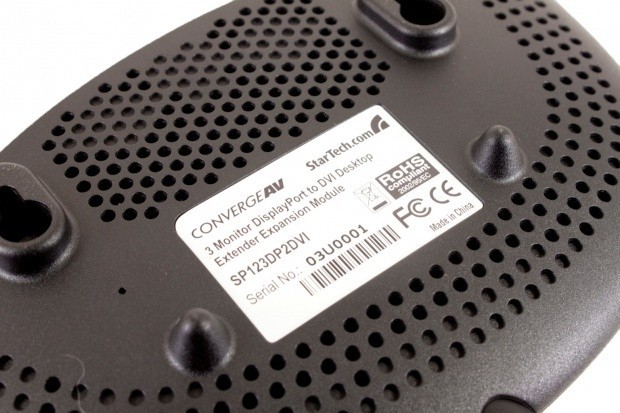 Overall the design is clean and well laid out. The specs even look fairly decent, although they are still under what a typical AMD Eyefinity or even NVIDIA multi monitor setup can achieve (3840 x 1024+ for three monitors). In fact, the resolution limit for three monitors is listed as less than what is possible for two on Eyefinity/3D Vision at 3840x1200.

Setting up the SP123DP2DVI is one of the simplest things I have ever done. It was as easy as connecting the three monitors to the ports, turning them on, plugging the DisplayPort and USB cable in and then turning on the PC. From there Windows sees the device and pushes the display out to the three attached monitors. In our case we had three low resolution images (one on each monitor). To correct that we used the Windows display manager and pushed the resolution up to the maximum supported of 3840 x 1024. As soon as we clicked Apply, we had a spanned desktop.

How do you measure performance of a device that splits a video signal? Well, if you are the Lab at TweakTown you take a look at how well it does this and if there are any color or image anomalies. In the first part of this we had a slight issue with the three panel resolution. Unfortunately we only have three Dell P2210H 22-inch displays on hand that are each capable of 1920 x 1080. This gives us an extended resolution of 5760 x 1080 which is significantly higher than what the ConvergeAV can handle; filling up a maximum of 3840 lines of that vertically and 1024 horizontally.

This left the image looking distorted and pixelated as it was not close to the native resolution (3840 is about 66% of the available lines vertically). In our case, this limited the usefulness of the system for any type of fine detail (like image manipulation). Gaming was in a similar boat. Although we did not have any "performance" issues, the image quality was not as good as it could have been because it fell far short of the native resolution of the monitor group.

The ConvergeAV SP123DP2DVI is a very cool idea. It allows you to group up to three monitors into a single display from one DisplayPort connection. It does this seamlessly and without much interaction from the user.

The problem with the ConvergeAV is when it comes to execution. Because it is unable to match the native resolution of most modern panels over 17 inches, it has limited use in both professional and consumer applications. The price tag of around $300 also puts a damper on this as you really are paying quite a bit more to get a similar effect from something like Eyefinity or even standard dual and triple monitors.

If StarTech can extend the resolution (and reduce the price a little) then we could see the ConvergeAV getting a much more solid hold on the market. As it is, we see it as a very niche product with not much practical use considering the other options currently available.