When we were contacted by the PR agency for Popcorn Hour a week or two ago and we heard they wanted to send us their C-200 HD Media Player, I didn't get overly excited. I've been testing a range of media players all year (many Realtek based units that while good, are far from impressive) and truthfully haven't really had too much to get excited about. I didn't bother checking the specifications of the C-200 until I started testing the unit to see what it could do and didn't really have much experience with Popcorn's products.

On paper I could see that the Popcorn Hour product was different. For starters, I could see that it wasn't built around the same Realtek solution that many companies have been using. The Realtek solution is fine - there are loads of files and formats supported and video and audio playback is good, but these sorts of devices get boring after a while, since they can all only vary in difference by a small amount. 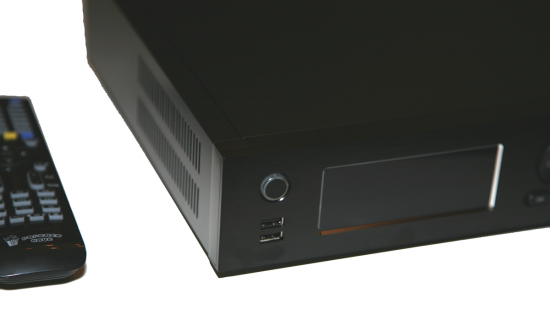 The C-200 makes use of the Sigma SMP8643 processor that is clocked at 667MHz - it is in charge of the show and makes everything happen. The basic and simply designed motherboard inside the system also gets 512MB DDR2 of RAM and 256MB NAND flash for storage. Not a whole lot, but it's enough for the operating system since most stuff is streamed to the C-200. You also get gigabit networking, which is a bonus, as it's usually only 10/100 with most media players. You get a stack of USB 2.0 ports (four external and one internal), HDMI 1.3a with CEC, 36bpp deep color, 12-bit xvYCC processing and HDCP 1.2 content protection. All up the system weighs in at a reasonable 3.7Kg and consumes up to 70 watts of power at maximum, which isn't too bad, but more than your standard run-of-the-mill media player.

There are a ridiculous amount of files and formats supported, but we aren't going to mention them all here, instead visit the specifications page here for the full list. However, one spec that stood out to me right away was in the audio pass-through section. Claimed right in front of my eyes was bitstreaming support for DTS-HD MA and Dolby TrueHD. It couldn't be, could it? Finally a media player supporting bitstreaming of these Blu-ray movie disc HD audio formats? Yep!

Watch below as we take an extensive look at the Popcorn Hour C-200. I apologize in advance for the massive length of the video. It's an advanced media player and there was plenty to cover and talk about. I won't feel bad if you skip parts, but hit play now!

So, as I said in the video above, the Popcorn Hour C-200 is by far the best HD media player that we have tested so far. The system is a bit slow starting up and sometimes moving from one section to another is a tad slow. Normally the system will be turned on and you probably won't be doing a full power on all of the time anyway. We saw some issues with the system effectively locking up or crashing during the buffering process, but that was only once or twice and with big Blu-ray ISO image files. We had to physically turn off the power at the back of the unit and turn the system back on and start again. The only thing that could really be added is a couple HDTV turners with recording capabilities to also turn it into a PVR, but that would also send the price of the unit skyrocketing as a hard disk drive would also need to be added in. That may be coming at CES 2010 next month as Popcorn Hour was hinting of something even better on its Twitter page.

If you are looking for a HD media player these holidays, I don't have any hesitation at all in recommending the C-200. It's got our Editor's Choice award because it's the best product of its kind that we have tested all year and honestly, it's a breath of fresh air. It's far more advanced, it features better navigation with a more stylish menu system, it includes a whole stack load of web services to stream video, upload videos, get the latest news, traffic reports and so on. Not only all of that, small details on the remote control are even perfected with an orange night light and the back cover won't get lost as it is secured to the remote. Did I mention that the system is also completely silent and generates a minimal amount of heat? But it has the most important feature of all - it is able to bitstream Dolby True HD and DTS-HD MA to your amplifier for the ultimate HD audio experience and the way it was intended by the Hollywood studios, even though they are the ones who have made it so tough to implement into home theater computers and players. Sure, it costs about three times as much as a standard HD media player, but it is well worth it in my opinion.

I tell you, the PC guys are going to have to be careful with products like the Popcorn Hour C-200. We have tested some great PC based systems such as the ASRock ION 330HT-BD nettop and even built our own AMD based HTPC capable of bitstreaming with an ASUS audio card (that costs almost as much as the whole C-200 system itself), but with products as the C-200, it puts me in a position where I need to consider if I even need my home theater PC anymore.

We will leave you with a strange error message we were receiving from the C-200. We didn't want to leave it out. Many of our retail Blu-ray movie discs that we tested with worked just fine, but some didn't. 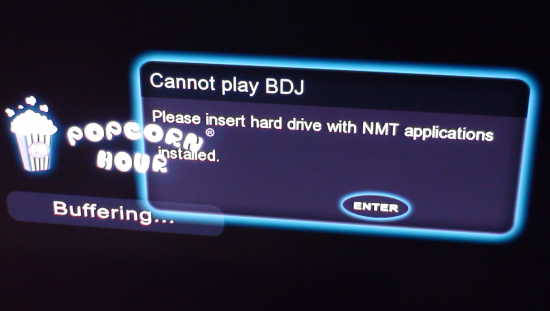 We are waiting for a response from Popcorn Hour and will update this section of the review when we get any news from them.

UPDATE FROM POPCORN HOUR: By any chance did you install the 1+GB USB drive required for Blu-ray support? We have an internal USB port for you to use if you decide not to install a HDD. The C-200 requires at least a 1GB USB drive or larger in order for it to support some Blu-rays.

So, if I read the manual (I don't read manuals), I probably would have found out that a USB 2.0 1GB pen drive had to be installed. Sure enough, I installed a 1GB pen drive into the internal USB 2.0 port on the motherboard and the error went away. I guess the C-200 just needs some extra storage space for some of the more interactive Blu-ray movies with fancy menu systems.