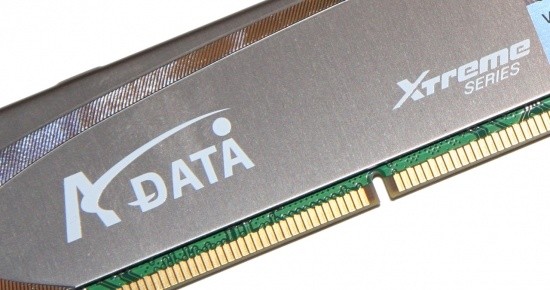 As dual channel kits continue to roll into the TweakTown labs here, the latest offering comes from A-DATA and sits in that PC3-16000 category which has quickly become the speed of choice for most overclockers.

What we're seeing from PC3-16000 kits these days is a huge range that caters for all budgets. There are some low latency kits that set you back a pretty penny, while there's also some other kits that carry with them more relaxed timings and a much more comfortable price point for many people.

We're not too sure where the Xtreme series from A-DATA sits, but that's exactly what we intend to find out today. On our next page we'll have a look at the package before having a closer look at the modules themselves. After that we'll have a look at the specifications, how we went with getting the default clocks and also see if we had any luck overclocking before we get stuck into the benchmarking and wrap it all up. 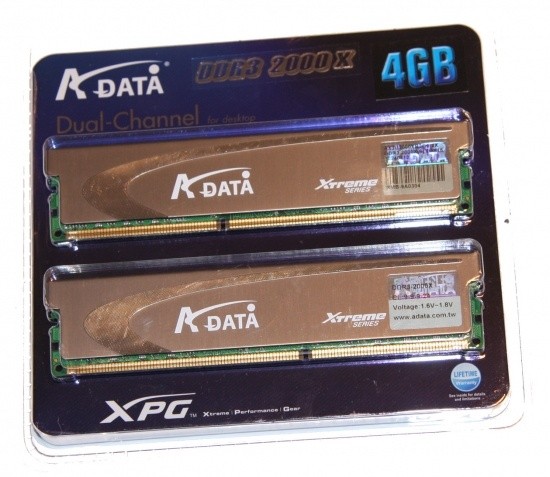 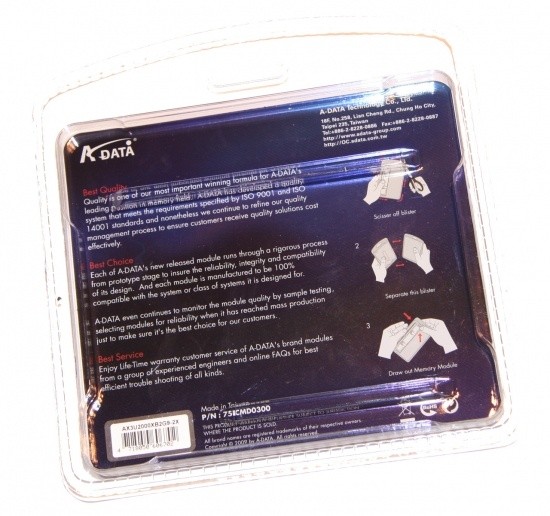 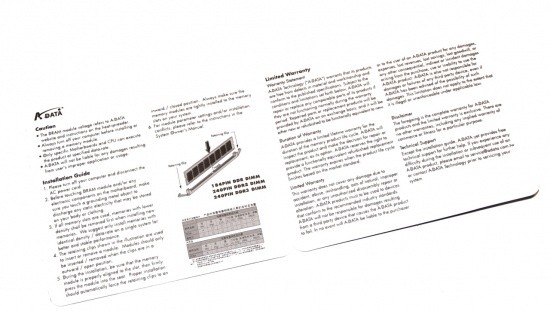 A-DATA use a horrible blister pack that is a complete pain to open. Apart from that there's nothing worth really noting. We can see the modules clearly along with the size and speed. Inside the package the backing doubles as a manual that lets you know how to install the modules.

Having a look at the modules, there isn't anything we haven't seen before. We've got a pretty standard heatsink design with both sides showing the A-DATA logo along with there being mention that they're part of the Xtreme series. On the far right we have a holographic sticker that gives us the standard information you need to know. 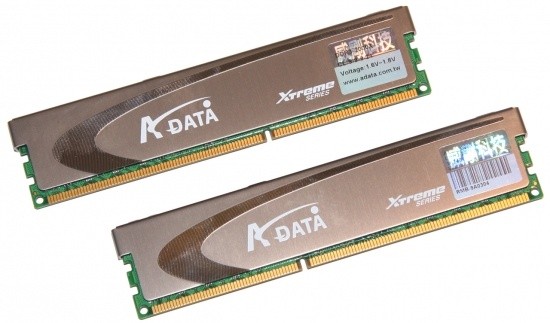 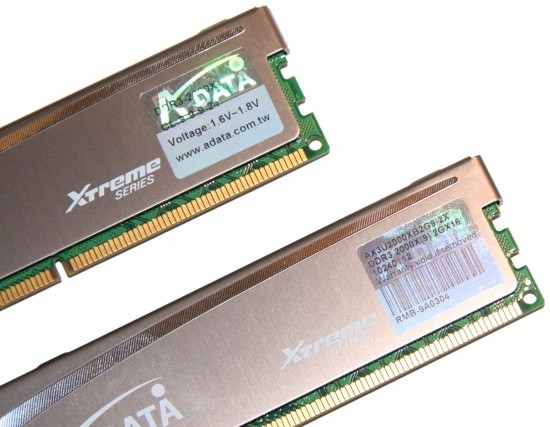 Having a closer look at the stickers, you can see across the top we have the model followed by the timings, voltage and a URL. On the other module we see the full model number along with the serial number.

When it came to overclocking we really had no joy. We got into Windows at 2040MHz DDR, but it wasn't really stable at the default timings and at 1.65v. While A-DATA say you can do 1.6v to 1.8v, we prefer to stick to the 1.65v mark that Intel say is the highest. It also creates an even playing field across the board when it comes to looking at the OC potential of other memory kits. 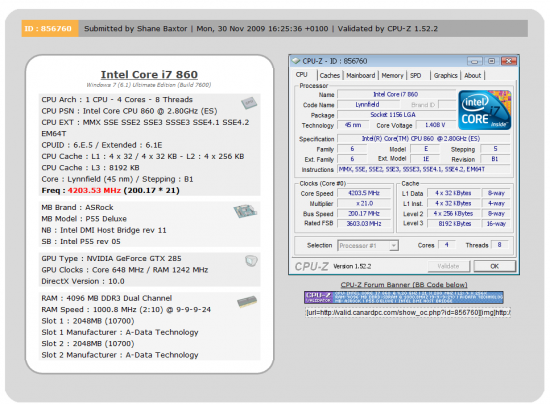 While getting much over 2000MHz DDR caused a bit of trouble, getting to the default 9-9-9-24-1T setup at 2000MHz DDR wasn't an issue using 1.65v, which can be seen above. While it's nice to get a bit more power out of a kit, you can't complain about the modules having no trouble getting to their stock settings.


Important Note: When modules are overclocked we adjust the BCLK which not only lets us fine tune the MHz out of a module, but in turn increases the overall CPU clock speed. While we always make the effort to include the BCLK and CPU speed in our graphs, please just make sure that you make note of these when looking at the results.

In some tests that don't purely test the memory speed, the extra MHz on offer from the CPU can increase the result. Of course, it's worth noting that having faster memory gives you the ability to run your CPU at a higher speed as well.

With not much luck when it came to overclocking, we'll today be seeing how the A-DATA X Series kit goes against the G.Skill Ripjaws with the same 2000MHz DDR setup. Instead, though, they'll run at 9-9-9-27 with a 2T command rate. We've also thrown in the PC3-15000 OCZ Platinum kit at its stock speed and the overclocked speed we achieved.

For specifics you can see all the important information in the graphs over the next few pages. 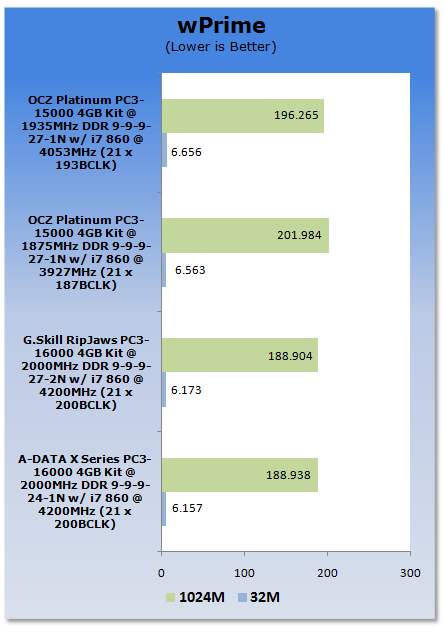 Under wPrime we can see that the two 2000MHz DDR kits sit quite close to each other. The more aggressive timings on offer from A-DATA don't really do anything for performance here. 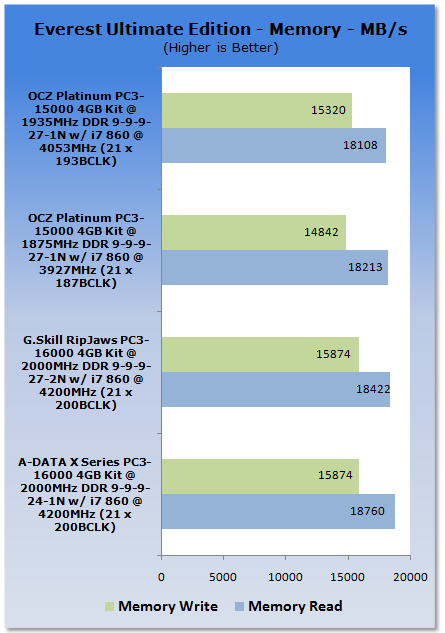 Looking at EVEREST, we can see that the more aggressive timings help improve read performance on the A-DATA kit when compared to the others. As for the write speed, you can clearly see that the two PC3-16000 kits actually have the same score here. 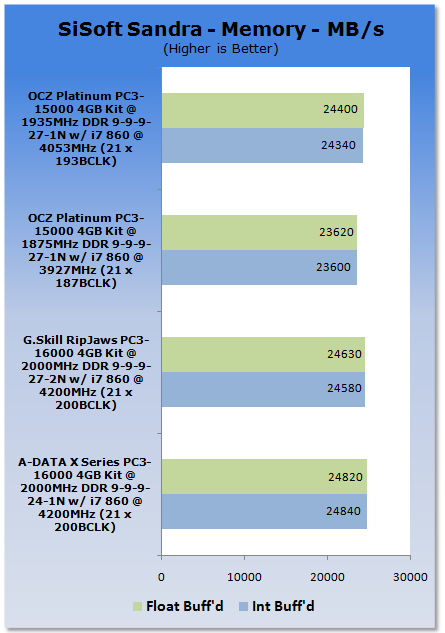 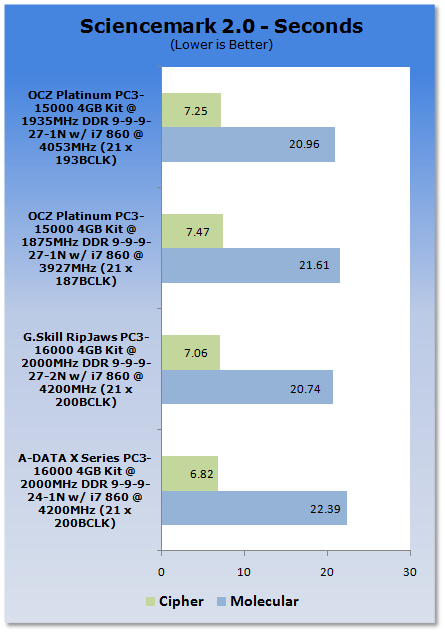 While the Molecular test seemed to run a bit slower, the Cipher one came in fastest when compared to the other kits here. 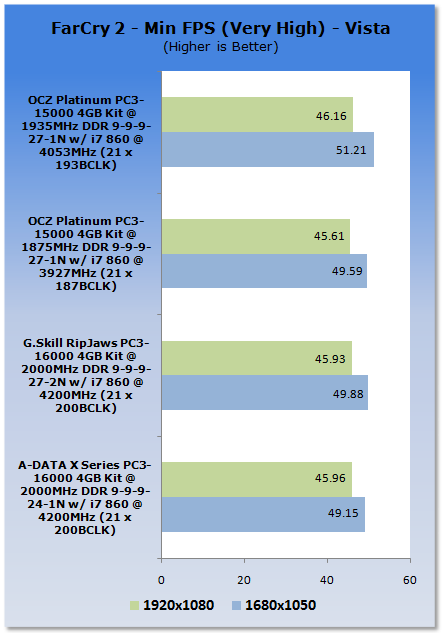 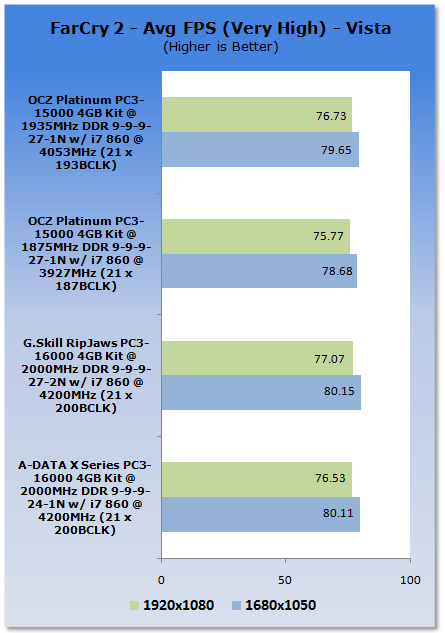 With the CPU clock between all setups being quite close, we don't see a whole lot of difference under Far Cry 2 performance which is going to benefit more with a higher CPU clock speed than memory clock speed.

Having a look at the A-DATA kit, you don't see anything that really stands out at you when it comes to the overall design of the kit. The heatsink that they've opted for isn't all that Xtreme, but does a good enough job when it comes to making sure that the default clocks can be achieved.

As for the timings, they're pretty good. The 1T command rate is nice and the 9-9-9-24 isn't too bad as some of the more relaxed kits come in at 9-9-9-27. In saying that, there are plenty of 8-8-8 kits out there if you want something more aggressive, but of course, this is going to come at a cost.

The most important thing about these modules is that the stock clocks of 9-9-9-24-1N are achieved with no issue. Getting to that setup was done in the first attempt using 1.65v and that's what makes a good memory kit.

If you're hunting for something that's a bit more aggressive than the G.Skill kit we looked at recently, this could be a kit worth looking at. It's not fancy, but the kit does what you want which is what we want.