Recently I looked at my first dual channel kit for the P55 platform. Today we're going to get stuck into the second one. The first thing that I have to mention about this kit from G.Skill is the name. I'm not sure what it is, but the name Ripjaws just sounds so cool. I've got my fingers crossed that it doesn't just stop there and hopefully we can slot the kit into our P55 test system and find ourselves getting excited about what the new series is able to offer us.

The kit we're looking at today from G.Skill is a little faster than the PC3-15000 kit we looked at from OCZ recently. Instead we're moving to that PC3-16000 number which has become the main number for overclockers wanting a kit that's going to offer a bit more power.

Let's have a look what's going on with the package before we have a closer look at the modules themselves along with the specifications. Once we've done that we'll see if we have any luck overclocking the kit before we get into the performance testing of the modules. 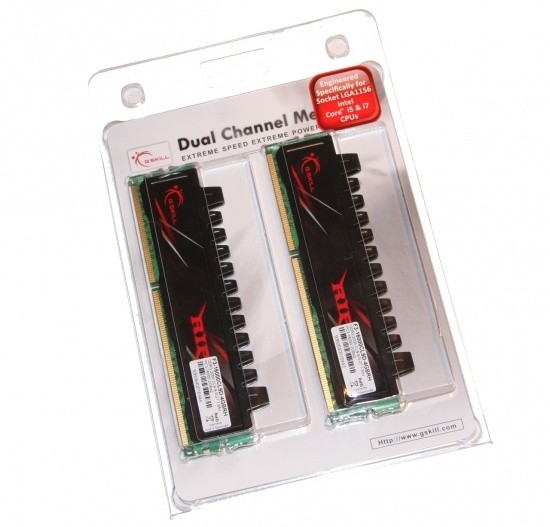 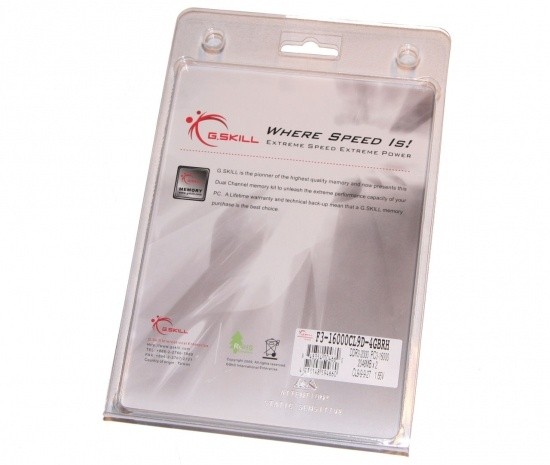 There's nothing too fancy going on with the package here; we can see the modules through the front and in the top corner we see mention that the kit is designed for LGA1156 CPUs. As for the back, there's a bit of a blurb, but more importantly we've got what exactly the modules are in the bottom right corner.

Having a look at the kit, we can see that new Ripjaws name displayed here. We can see a new cooler that looks pretty mean, but isn't really anything we haven't seen before; albeit the fins are a bit different. Both sides have the same sticker with one side also having another one that gives us a run down on the specifications. 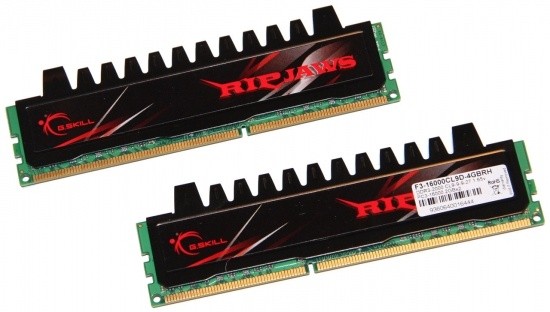 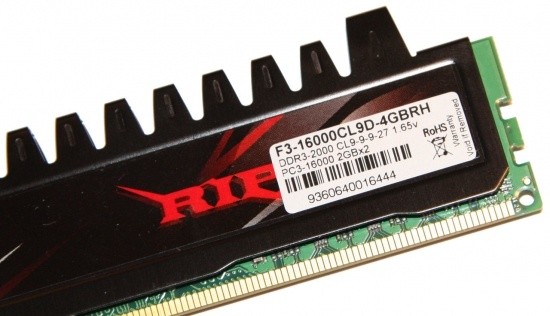 The sticker gives us all the major details on the memory module including the speed, timings, voltage and model. We won't go into too much detail here, though. Let's jump forward to the next page to see exactly what we have going on as far as specifications go.

If you didn't know already, PC3-16000 translates to 2000MHz which has quickly become the speed to buy if you're looking for something that is going to offer some good breathing room. Looking at the timings, they're pretty relaxed coming in at 9-9-9-27 along with a command rate of 2T. 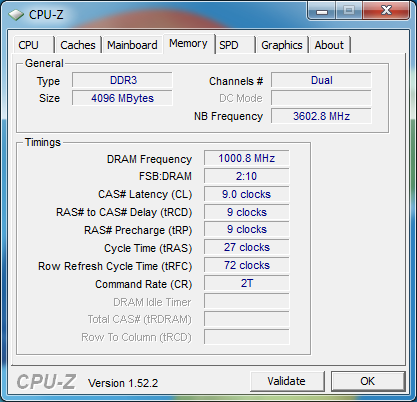 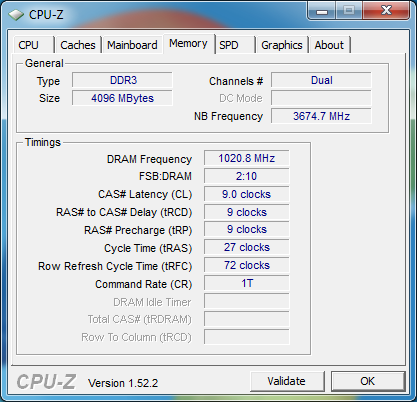 When it came to overclocking, since I accidently set the modules to a command rate of 1T, I knew the kit was capable of running that at the default speeds. What we then did is see what we could do with the MHz at this command rate.

While we didn't get anything too fancy, we did get another 40MHz DDR out of the kit, bringing it to 2040MHz DDR. To achieve this we continued to use the standard 1.65v which is what Intel recommend as the highest for memory.


We'll have a look at how the kit from G.Skill we have here today compares against itself when overclocked, while also comparing it to the OCZ Platinum kit we looked at recently. When it comes to overclocking memory, we have to adjust the BCLK. While this gives us the ability to fine tune the MHz we get from the memory, it also adjusts our CPU speed.

We make mention of the CPU speed and BCLK used in all our graphs and we try to make sure that we mention when the extra CPU MHz is helping more than the extra RAM MHz. In saying that, just keep it in mind when looking at the results between the different setups. 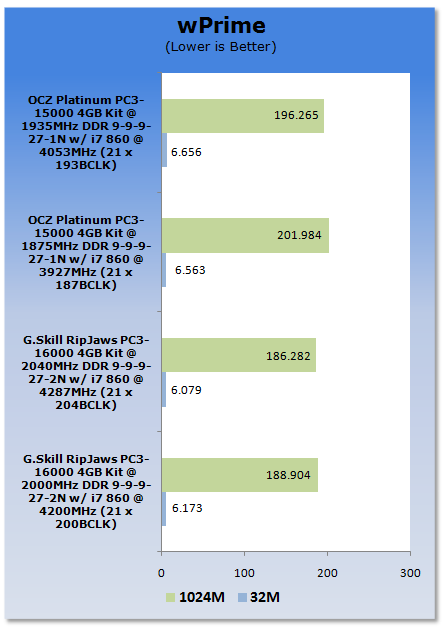 The extra MHz on offer from the G.Skill modules help bring our wPrime times down. Moving up a notch again, we see the times drop back a little more. 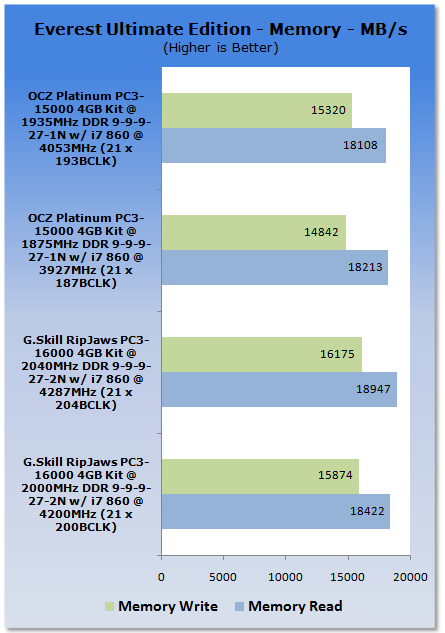 Compared to the OCZ kit at its stock 1875MHz, we can see the G.Skill kit offers us a nice little bump in performance when looking at both the read and write times. Moving to 2040MHz and dropping to 1T, we can see even more MB/s available. 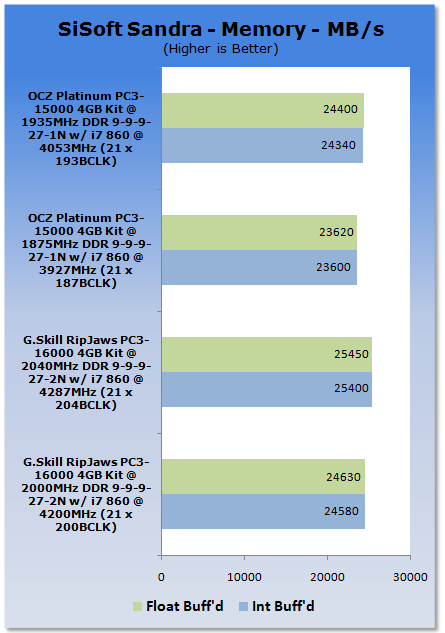 Looking at SiSoft Sandra, we see similar results to EVEREST. The G.Skill modules at 2000MHz are only second to the same modules overclocked to 2040MHz. 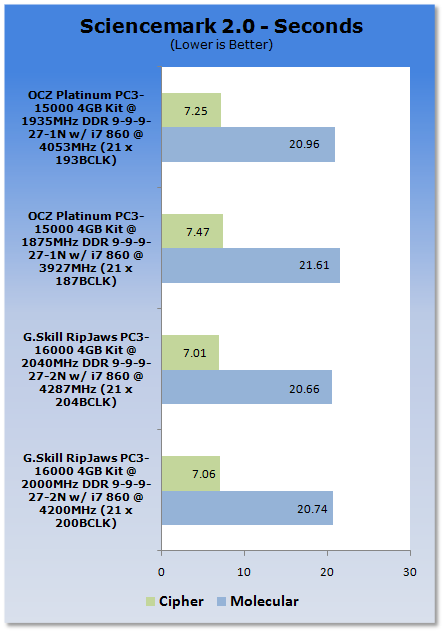 Looking at Sciencemark, we can see the times come down as we increase the speed of our memory and CPU. 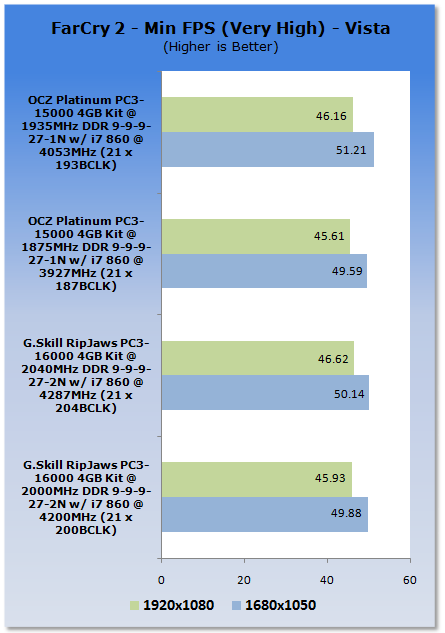 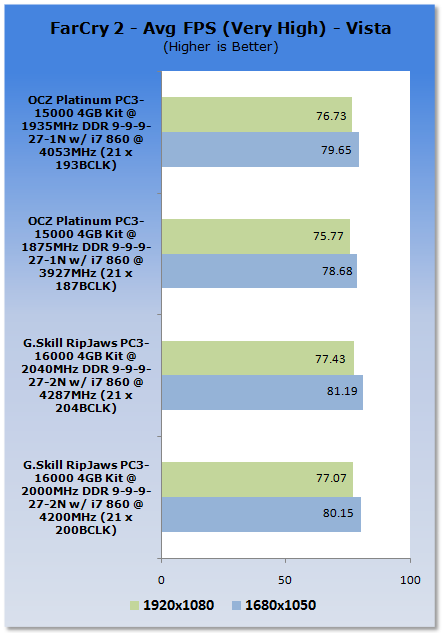 Even though there's some extra CPU MHz on offer when we overclock, there's not a huge difference in FPS when it comes to looking at the scores above. We don't really see much happening in the minimum department; it's only in the averages we see an extra few FPS.

There's more to the Ripjaws kit than just a cool name. Getting to the stock 2000MHz DDR speed isn't an issue with our ASROCK board and moving to a 1T command rate and squeezing an extra 40MHz DDR out of the kit wasn't hard at all either. While we did try to get higher, we didn't have much luck.

The Ripjaws kit isn't all that fancy when push comes to shove. Sure, it's a bit of an upgrade when compared to a standard heatsink that has no fins, but it's nothing too wacky. While we haven't seen the exact same fin setup before, it's nothing that's going to shock you.

At $119.99 over at Newegg, this is an extremely aggressively priced 2000MHz DDR kit. Sure, the timings are a bit more relaxed than other kits that come in at a higher price, but if you want a 2000MHz kit that isn't going to bust your bank account then this is a perfect fit.

This is a really great kit; pricing on the model is fantastic and it's great for people who want to get into overclocking, if you want to have plenty of head room yet don't want to pay that normal PC3-16000 premium which comes with most kits, you're not going to find anything else that stands out like these Ripjaws modules.