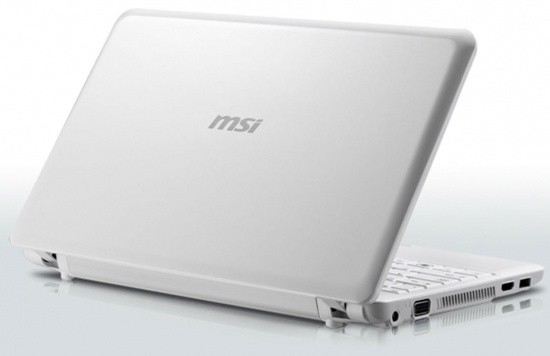 
I have lamented for a while now as I have tested netbooks that they are all so close to identical that once you test one netbook, you have pretty much tested them all. Out of all the netbooks I have tested over the last few months, the only things that typically change from one brand to another is the name on the front of the computer and maybe the case design.

Other important bits like the CPU, RAM, storage and OS are the same on most machines. Machines can set themselves apart a bit in their keyboard and screen, but the netbook market is on very common ground on those two respects today.

I am glad to say that after eating netbook saltines for a while, today I have a Ritz cracker on my desk in the form of the MSI U210. MSI calls the U210 a netbook, but really it's about as far as you can get from the typical netbook without costing significantly more than what netbooks are selling for today. The U210 features AMD power, a larger screen and more. If you are happy with the performance of a typical netbook, but wish for more working space on the screen and keyboard, the U210 may be the answer to your netbook dreams.

MSI also covers the machine with a 1-year limited warranty and the U210 carries a MSRP of $479.99. The machine is available from several online stores.

As you can see, my test unit was the white U210. There's nothing particularly impressive about the outside of the machine, but its size doesn't make you think netbook as soon as you see it.

Not much to see on the front edge of the U210 but a few lights to show what's active on the machine and if it's on AC or battery power.

Take a gander at the left side of the U210 and you find the HDMI out, VGA out, AC port and a USB port.

The right side of the machine has a bit more going on than the left with the RJ-45 port, memory card reader, two USB ports and the headphone and mic ports. A Kensington lock port is also on this side.

The back of the U210 has nothing but the battery to look at. 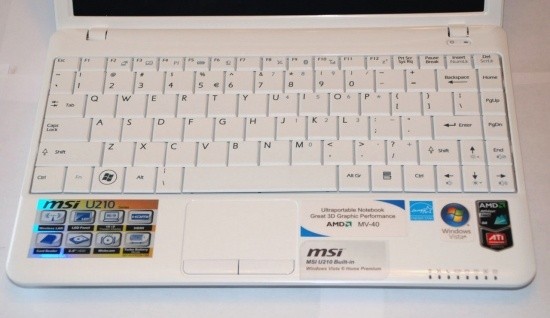 That's a much larger keyboard than you will find on the average netbook and it works well, too. 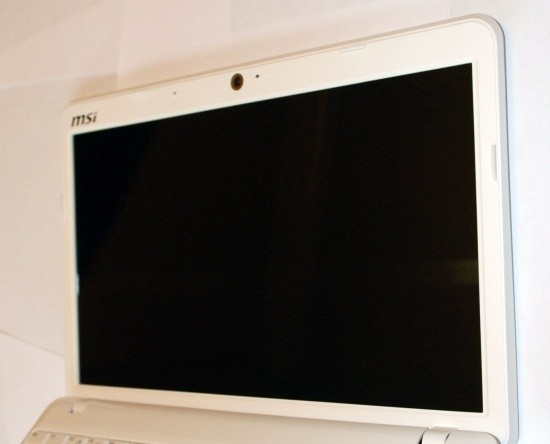 My old nemesis, the glossy screen, appears on the U210. Glare is not welcome but the sharpness and colors reproduction are. 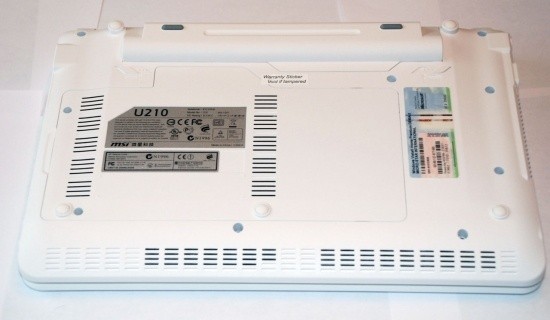 Flip the U210 over and you find the battery release and one large cover hiding the RAM and HDD sockets.

Time to see some benchmarks and I am really looking forward to this. From the time I pulled the U210 out of its box and saw that it ran the AMD Neo platform, I was looking forward to seeing how the machine performed compared to the Intel Atom-based netbooks I typically review. I will be using my iTunes encoding test, the Windows Media Encoder test and Battery Eater Pro to give the machine a workout.

As always, I give the caveat that your real world mileage will vary when it comes to battery life. I ran the U210 at 100% screen brightness with no power saving options turned on for the max performance battery life test and then reduced the screen to 50% brightness at the same power settings. Battery life considering the performance of the U210 is very impressive. 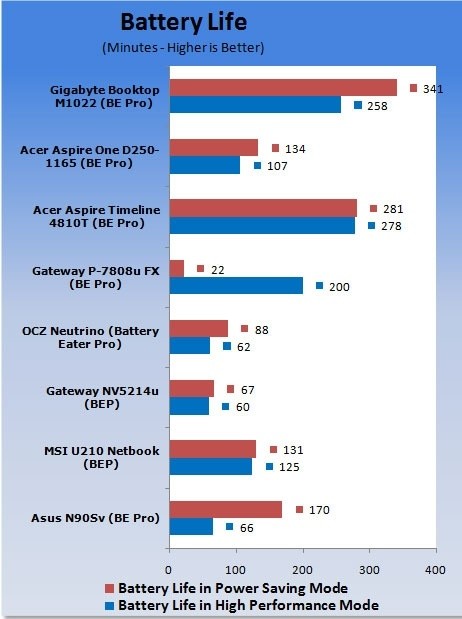 Now it is time for our familiar iTunes encoding test. I take the Stone Temple Pilots Core album in MP3 format and use iTunes to encode the tracks into AAC format. I time the process with a stopwatch and compare the numbers to other systems in the chart below. The U210 blitzed the netbook competition in this benchmark. 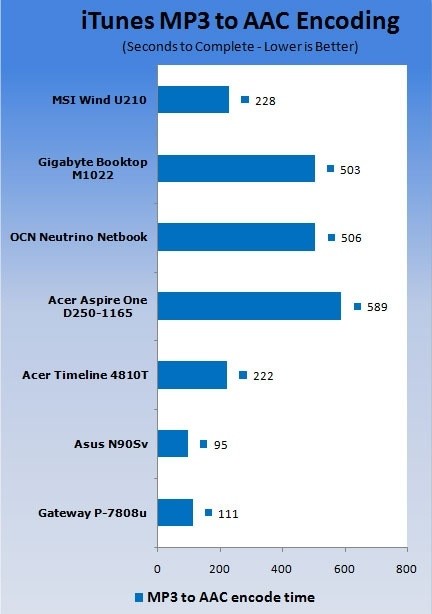 The last benchmark up for the U210 is the movie-encoding test. I take the Microsoft Magic of Flight Video in 1080p resolution and use WME to encode the video for downloading from a computer in DVD video quality and CD audio. Again, the U210 whipped up on its netbook peers with impressive performance. 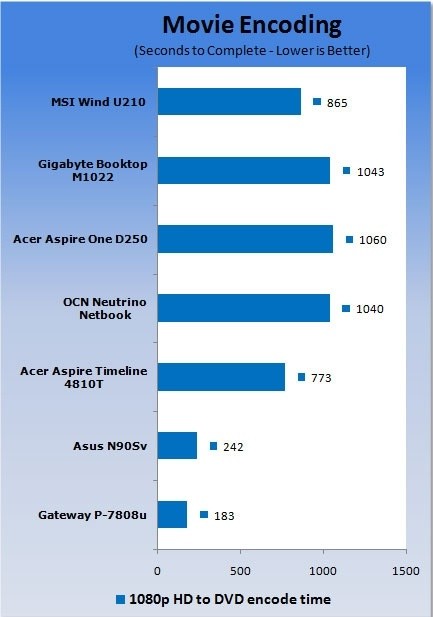 When I got to this point on the Lenovo S10-2 review last month I mentioned how jaded I was by all the netbooks and haw similar they are. The U210 was like a breath of fresh air to me. The machine uses the AMD Neo platform offering blazing performance for the netbook class. 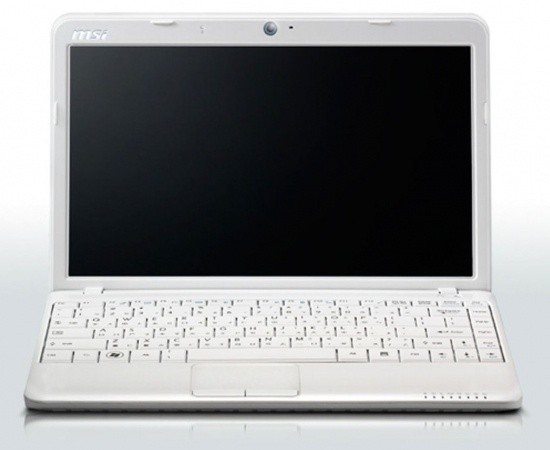 Other significant changes in the U210 compared to other notebooks include the keyboard and the screen. First, I will talk about the screen. If you have read any of my notebook and netbook reviews, you know that I am not a big fan of glossy screens because of all the glare they throw in normal indoor environments. I have the same issue with glare on the 12.1-inch LCD that the U210 uses. Glare aside, the screen has fantastic colors and sharpness. The screen has good skin tones and nice deep blacks; easily one of the best screens on a netbook I have tested.

With a larger chassis, the screen isn't the only place you get more room with the U210; the netbook also has a larger keyboard. The keyboard on the U210 is significantly larger and has more space than the keyboard on your average netbook with a 10-inch chassis. The keys are well spaced, clicky when pressed and have good tactile feedback. The right shift key is smaller than the left shift key, but the smaller size is still larger than the typical right shift key on a netbook.

The track pad is large and well placed. I didn't have issues hitting it with the heel of my hand when typing like I do on many smaller netbooks. The two mouse buttons are under the track pad where they should be and offer good feel and resistance. MSI does pack the U210 with several pieces of trial software, which I consider bloatware. The most hated is Norton in my book; I prefer AVG Free and Norton only gets on my nerves until I uninstall the application.

After all the testing and fiddling about with the U210, I really, really liked the machine. I have always thought that a 12-inch netbook really defeated the purpose of the netbook by adding more bulk to what was supposed to be a very portable class of machines.

I can say with certainty that of all the netbooks I have reviewed, the U210 is the one I would prefer to carry in my laptop bag, especially considering the fact that its battery life is as good or better than most of the machines I have tested in the netbook class.