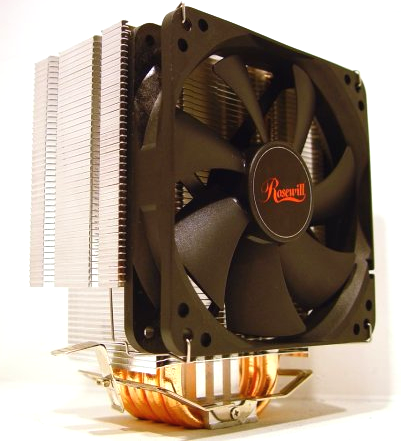 Rosewill is a relatively fresh manufacturer to enter the computer component market. They encompass everything from cases, to power supply units, to fans and coolers. From what I have gathered, Rosewill is Newegg's "house brand" with a goal to provide quality parts at a reasonable price. Above all, Rosewill's main objective is to keep their customers happy. As a consumer myself, I am glad to see an upstart company striving to please the customer versus making the all mighty dollar first.

Rosewill has released their largest CPU cooler and have submitted this FORT 120 to our labs for testing. This is a tower style cooler and Rosewill's first cooler to be cooled with a 120mm fan. They, however, don't stop there. The FORT 120 holds a few tricks up its sleeve, such as heatpipes that make direct contact to the HIS and also something Rosewill calls "Stonehenge Technology" which I will show you a bit later.

Since this is my first time with a Rosewill product I am intrigued to say the least to see what they have in store for us. I have read many posts on various forums about the Rosewill product line and this time I get to see for myself what they are all about. From a brief examination of the FORT 120, it shows promise with the design, but let's get down to business and see what Rosewill has with their freshly released FORT 120 / RCX-SHDT120X1 CPU cooler. 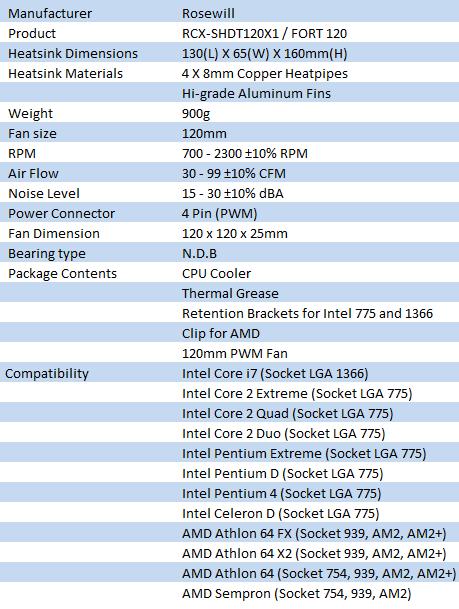 With the FORT 120 the cooling begins with four 8mm heatpipes, which as I said, make direct contact with the CPU's IHS. Then some of the heat is transferred through the "Stonehenge Technology", which refers to the pre-cooler on the top of the base that pulls additional heat from the base into the lowest four fins of the lower thirteen fin section. The heatpipes, however, travel all the way through the lower thirteen and the forty fin top section. These fifty-three fins are thick and have the ends bent to enclose the sides of this cooler to maximize the fans potential to remove the heat from all this surface area. Speaking of the fan, Rosewill accompanies the FORT with a 30-99 CFM fan that uses a 4-pin connector for total control of performance versus noise. Rosewill makes sure that the FORT 120 is available to use whether AMD, since socket 754, or anything Intel socket 775 and socket i7. All this potential comes in a 160mm tall and 900 gram package.

The fan paired inside the box is a 120mm by 25mm non-LED fan. This fan connects with a 4-pin, PWM connector, so users can dial in the amount of cooling and noise needed for each specific situation. This fan bases at 700 RPM and puts out 30 CFM. It seems the selected fans should have plenty of cooling potential with a maximum of 99 CFM at 2300 RPM. For the "silent cooler" users out there, the FORT 120 can go as low as 700 RPM which lowers the CFM to 30, while at its lowest setting the fan pushes out 15 dBA of noise and up to 30 dBA at full speed.

So far, going through the usual Google searches, the RCX-SHDT120X1 or FORT 120 can only be found at one place, which is no surprise. Since Rosewill is Newegg's "house brand", I really didn't expect to see this cooler for sale anywhere else. The cooler shows currently in stock and I can only assume they have plenty of stock to go around. The FORT 120 comes at an asking price of 49.99 U.S. Dollars plus shipping at Newegg. While the price isn't exactly "rock bottom pricing", for the features that the FORT 120 boasts, the price is not out of the realm of "the norm" for what it offers on paper.

Rosewill's FORT 120 / RCX-SHDT120X1 comes in an all black package with a bold product image pasted on the front, so you can see what the cooler looks like inside.

Five main features adorn this side of the package. They include the 120mm fan, four 8mm heatpipes and the "Stonehenge Technology", to name a few. At the very bottom is a spot for a serial number which seems non-existent, there is a product number label instead.

On this side we are greeted with three images of the base of the FORT 120, again addressing the features. Just below is the chart for Rosewill's in-house testing results on a Q9650 against a "normal 6mm heatpipe cooler" and an Intel stock cooler.

The FORT 120 comes very securely packaged for shipping. The cooler is completely surrounded in this high density foam with a piece at the bottom protecting the base, while the top is both protection as well as a tray to ship the hardware in.

Pulling the FORT 120 free of its packaging leaves you with a ready to run CPU Cooler fully assembled for AMD use out of the box. The fan also comes applied to the cooler with two wire clips. As you can see, the 120mm fan covers the FORT 120 nicely.

Looking at the profile of the FORT 120, you can see that each fins edge has been bent down and rests on the fin below it. This is a twofold gain for the cooler. Not only does it make the cooler more structurally sound, it also keeps the air flowing all the way through and out the back, not wasting air that would normally escape out the side of the cooler. One last thing to point out and that's the fact that the FORT 120 is grooved to accept an additional fan for a push and pull setup of fans.

I spun the FORT 120 around so that the fifty-three aluminum fins are viewable. There are two separate sections as I alluded to. The bottom thirteen fins use a smaller fin for clearance of motherboard components, while the top section is obviously wider.

Taking a look at the top of the FORT 120, the fin shape is very reminiscent of the Noctua fin design, even down to the holes that pass through all the fins. The holes are of no real use with this cooler either as they give access to absolutely nothing. The fins are thick and strong and are pressed on to the four, u-shaped heatpipes.

As if the four large 8mm copper heatpipes aren't enough to transfer the heat into the fins, the FORT 120 utilizes this pre-cooler that they refer to as "Stonehenge Technology". While this idea has been seen before, it does have a purpose, as most coolers with one test pretty well versus similar coolers without them.

As with most direct touch heatpipe coolers, the bases tend to have slight gaps from the aluminium base to the copper heatpipes and the FORT 120 is no exception. While light did pass through with the razorblade test, the heatpipes were flat and level with each other and that's what really matters in such coolers.

The hardware that accompanies the cooler is pretty thorough. There are back plates for both sockets; LGA 775 and i7. The AMD clip uses the stock socket to clamp on to, so no need for a plate there. On the left are the LGA775 mounting "legs" that would replace the pre-applied AMD clip using the same screws. The i7 "legs" on the right they are used in the same fashion. This leaves us with the two additional fan clips, the supplied packet of TIM and the four springs and screws for Intel mounting.

Both Intel plates are backed with a protective plastic on the side that will lay on the motherboard. This will keep it from shorting on any solder points. If you feel the need to, pull the paper cover so that you may apply the back plate directly to the back of the motherboard for easier installation, as it holds the plate in place rather well.

In this sample there were no instructions. For AMD there is no real need for them; you just take the cooler out of the box and clip it in, plug in the fan and boot the PC. With Intel it is a bit more complicated, but with a bit of trial and error I was able to figure it all out pretty quickly. Rosewill does, however, have PDF versions of their instruction available here. 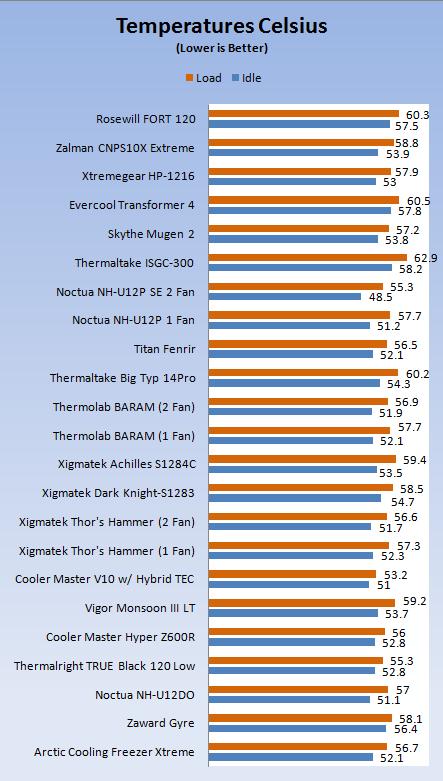 The temperature results speak for themselves. The FORT 120 doesn't do all that bad in our testing, but is bested by cheaper solutions. 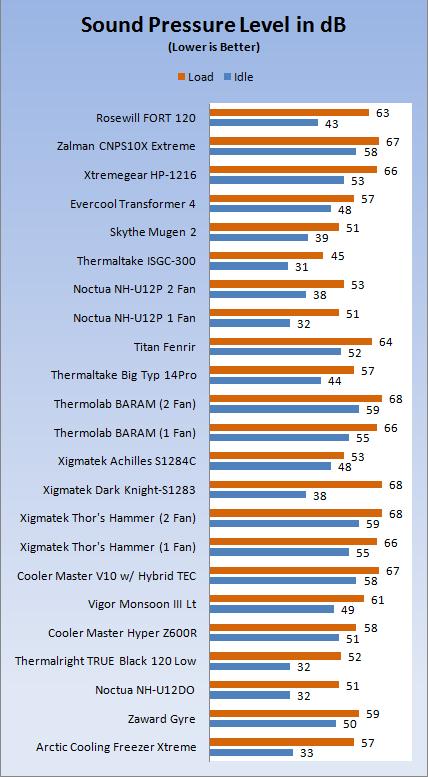 With the PWM control of the fan it can be lowered to around 700 RPM and the results at this setting are very good. When the fan is kicked up to a full 2300 RPM, the fan tends to make a bit more noise. With up to 99 CFM of air being moved, you have to expect a bit of a hum to get that sort of flow from a fan.

The FORT 120 from Rosewill is a solid feeling cooler once you get it in your hand. There is very little flex in the fins and this cooler should stand up to the abuses some of us tend to put cooler through. The fan is also solidly held onto the cooler with the simple wire clips. There was no discernable rattle or any vibration at all between the fan and the fins. This and taking into account the ease of the multiple mounting hardware kits, the FORT 120 seems like it should have been a better competitor.

I can't really find any faults with the cooler design. It's solid, mounts well and very secure, even with the AMD latches. The fan is tolerable and the cooler has a nice overall look. All this and a ton of surface area cooled with 99CFM, I would have expected a bit better from this Rosewill sample to be honest, as far as the temperatures are concerned anyway.

Don't get me wrong, the FORT 120 from Rosewill will keep up with most coolers on the list, but I have to take everything into account when rating and evaluating these coolers. With a 49.99 U.S. Dollar asking price at Newegg, Rosewill is sort of pricing themselves out of the buyer's dollar and I feel most buyers will tend to go for the lower priced and better performing coolers we have tested up to this point. I can't blame you; as a consumer I would opt for the best bang for the buck cooler and I just don't think this is it. 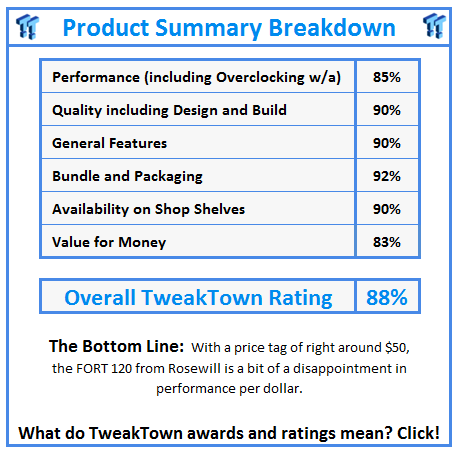