In our first Crucial solid state drive review we tested the companies first generation product at the same time other companies were releasing their second and third generation drives. As you can imagine, the drive didn't perform as well as the newer drives. A few months after the review, Lexar, the parent company of Crucial, announced that a new SSD was headed our way, but after weeks of waiting we found out that the product wouldn't materialize. Looking back now it is easy to see why Crucial let the paper launch turn into vaporware; JMicron drives were all the rage and even though everyone knew about the issues that accompanied them, the companies still released the drives, all except for Crucial.

We have tested several Indilinx Barefoot drives from a wide range of manufacturers and have yet to find an issue that would keep us from recommending the controller to both notebook and desktop users. It is obvious that Crucial does their fair share of internal product testing which goes a long way with end users who want a product that already has the little issues worked out. The solid state market is moving along very quickly and the M225 Series might be a little late for the power users that must have the latest and greatest as soon as possible. But Crucial recognizes that the Barefoot controller has been out for a few months now so they are going to compete on a different level, cost.

When we reviewed the G.Skill Falcon we made a point to show that the drive was one of the first Barefoot drives on the market and that the drive had the lowest price point of all the 128GB drives with the same controller. Since then we have observed that the Patriot Torqx (256GB) has a Newegg price of 699 USD, the Super Talent UltraDrive ME is 619 USD and the G.Skill Titan (JMicron controller) is 599 USD. The Crucial M225 has an MSRP of 599 in 256GB capacity and we should see the drive priced lower once it hits the e-tail market. In short, right from the launch the Crucial M225 in 256GB capacity is the lowest priced Barefoot controlled SSD on the market. Let's move on and see what else the M225 has to offer.

The M225 Series is currently made up of three products, 64GB, 128GB and 256GB capacity. All of the drives use multi-level cell memory and the same Barefoot controller that we have tested countless times before with 64MB of cache. The large amount of cache eliminates any stutter issues that we had with the early JMicron controlled drives.

As stated on the previous page, Crucial is playing hard ball with the price of the new line-up. The 256GB drive that we are testing today is already available for 599 USD; this is quite a bit lower than just about everyone else's price on 256GB Barefoot drives. Crucial is sticking with the low cost strategy for the entire line, the 128GB is 329.99 and the 64GB is 169.99.

Let's move on and see if Crucial's low(er) cost SSD can live up to the high performance claims. 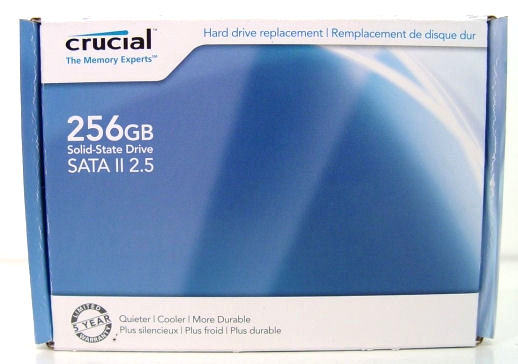 Crucial informed us that the final box design was going to arrive after our drive shipped, but the difference between what we received and the final retail box would be minimal. The outside of the box is pretty plain with very little product information on the front. 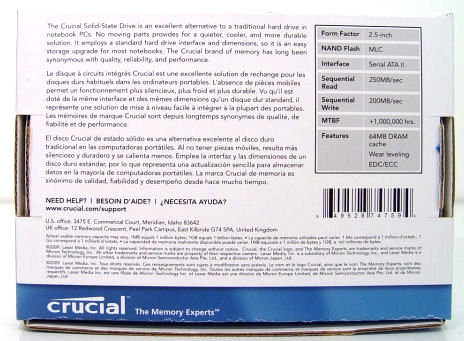 On the back we found a full specifications list as well as some general information about solid state drives. 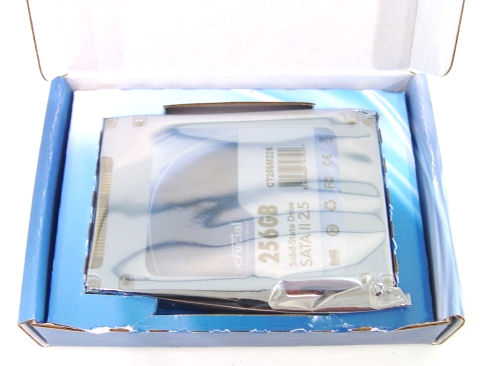 We found the drive in an antistatic bag and inside of a box that keeps the drive secure for shipping. 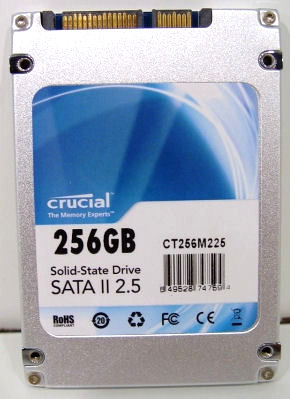 Here is our first glance at the M225. On the bottom of the drive you will find a label with the serial and model number. The drive has reinforced areas where you screw the drive into a carrier. 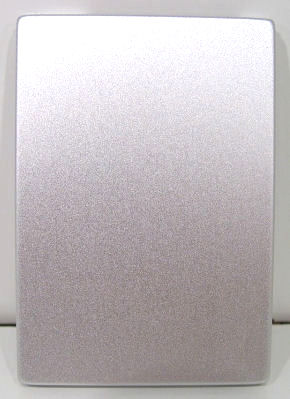 The top of the drive is made of aluminum and is void of labels. 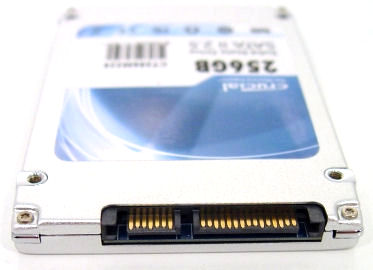 The power and data connectors are located where they should be. The M225 does not have a jumper for updating firmware.

On the side we see that the drive also has the mounting holes just like standard platter 2.5 inch form factor drives.

Crucial has a very informative manual that shows how to swap drives in many notebook models.


Today we are comparing the Crucial M225 256GB SSD to other 2.5 inch drives that we've reviewed in the past. 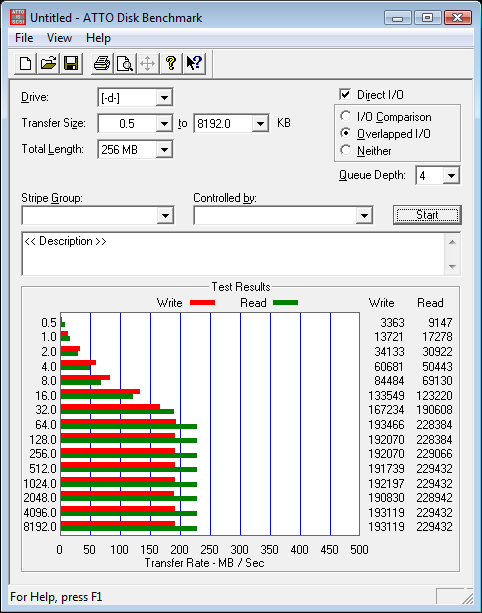 Here we see that under ideal conditions the M225 is capable of hitting nearly 230MB/s read and 193 MB/s write speeds in our test system. 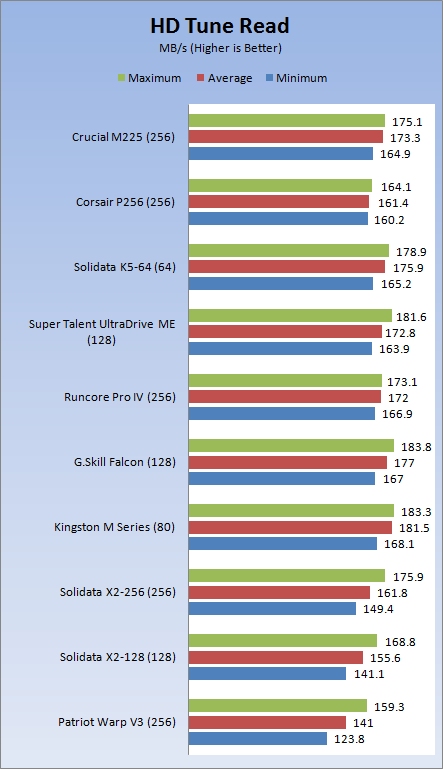 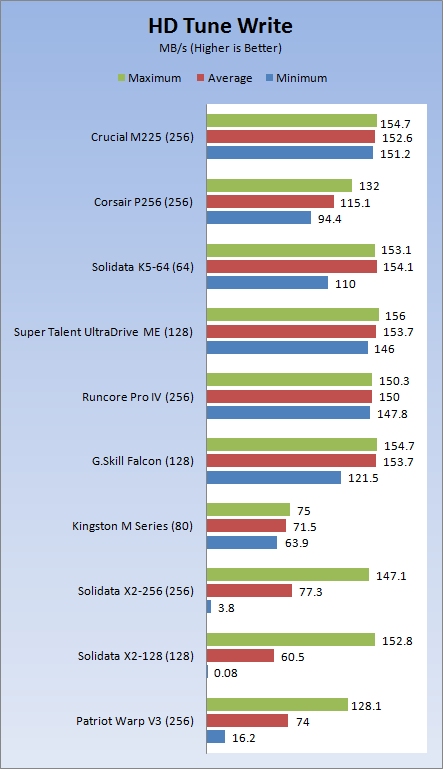 The write test shows numbers that are just as impressive. 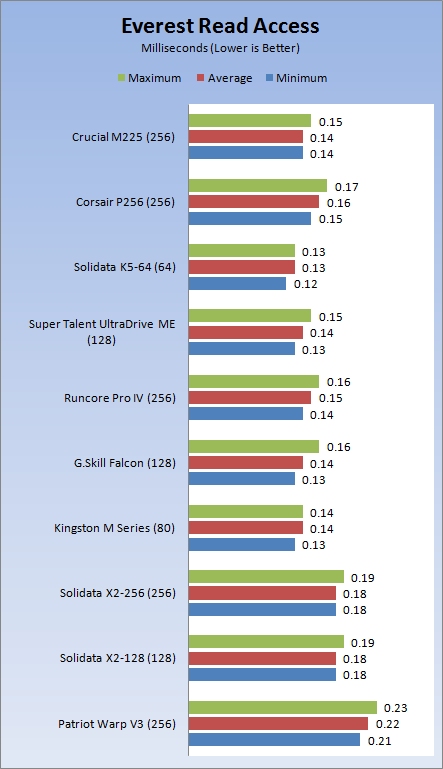 Random access time is where solid state drives really show their superiority over platter based drives. Here we see that the M225 is on par with other MLC Barefoot drives we have tested. 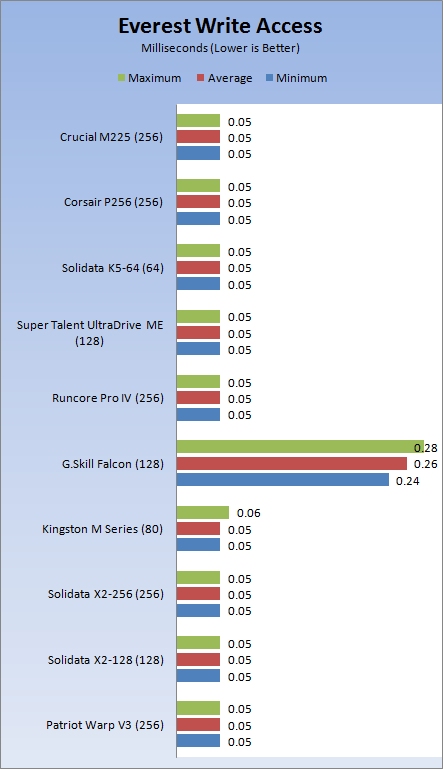 The write access times for nearly every SSD are right around .05 milliseconds.

Our Windows tests show that the M225 runs a little faster than most of the Barefoot drives that we have reviewed so far. The SLC drive from Solidata is a tad faster in some tests, but the M225 is able to outperform the Intel X25-M in some tests and runs toe to toe with it in others. 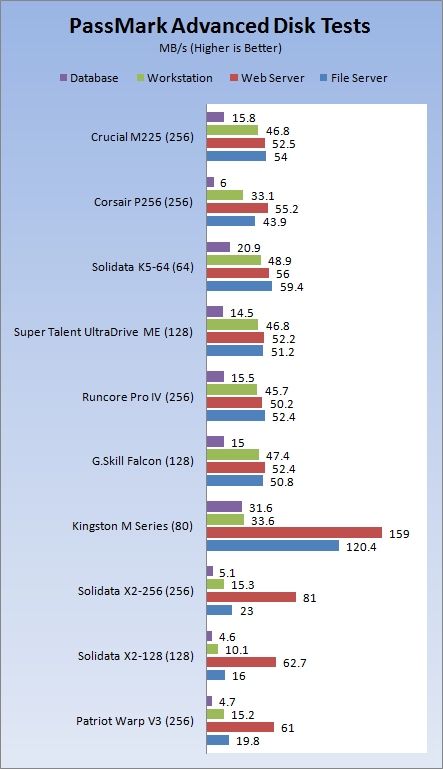 The workstation test shows that the M225 is faster than the Intel X25-M, a test designed to show multitasking performance. The Intel controller is still the fastest when it comes to web and file server tests and doubles the performance of the M225 in database tests.

Crucial is marketing the M225 for notebook users so for most people these tests have little value, but the high workstation test numbers give us all an accurate score for what to expect as a power user using a notebook.

This Crucial solid state drive is night and day different from the first drive we tested last year. The first drive was expensive and underperforming at the time it was reviewed. The new M225 is fresh, fast and for what could be the decision making difference, it is cheap(er). Yes, cheaper than the competition, but at 599 USD for a 256GB drive it still costs more than most notebooks sold in this economy. There is a market for 256GB drives and if you fall into the group of users looking for a nice, well rounded drive that has great performance and the lowest price point, the M225 is a no brainer.

The good thing is that Crucial has a pretty wide price range for their M225 Series. The 64GB drive is 170 and the 128GB is 330 USD; both are very competitive in price to the JMicron drives and lower than most Indilinx drives. Crucial has figured out a way to give you Indilinx performance at a JMicron price.

I hope that by now you already know about all of the benefits of solid state drives. Crucial is more of a mainstream company than G.Skill or even Corsair, so we should go over some of the basics. The Crucial M225 is an outstanding product that will transform your traditional notebook from a slow underperforming object that you despise and turns it into a performance monster. The slowest piece of equipment in any computer system is the storage subsystem, ie. your hard drive. Any increase in HDD performance has a direct effect on just about everything else you do. Even the simple task of starting your computer is changed when a solid state drive is used. If you normally turn your notebook on and then hit the kitchen to pour a cup of coffee, kiss your coffee preparation time goodbye because by the time you walk out of the room your notebook is ready to get to work and it took less time than it took you to measure a teaspoon of sugar.

It is hard to imagine a hard drive making your Facebook time go smoother, but many online websites store small pieces of data on your computer. These cookies and small cache files in some cases can make your notebook seem slower than it should be due to rotational latency of standard hard drives, something that SSDs simply don't have, so your computer feels faster. 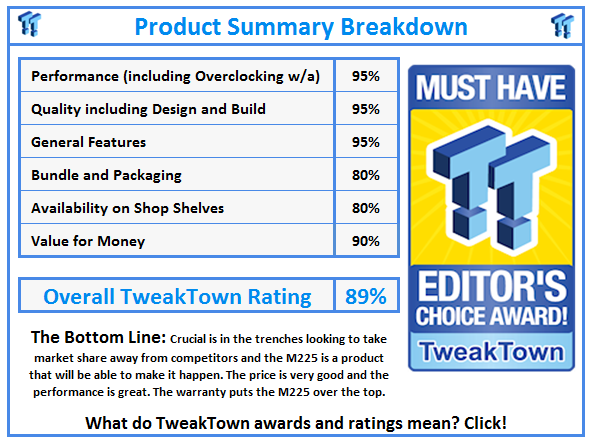