Bringing together the entire crew of the original series, The Motion Picture sees James T. Kirk (William Shatner), Spock (Leonard Nimoy) and the crew of the U.S.S. Enterprise reunited in a bid to stop an unknown, hostile energy source from wreaking havoc across the universe, which will destroy Earth in the process.

Many fans deride the slow pace of the film (it has been harshly dubbed The Motionless Picture), but I appreciate the slightly slower pace and over time it has become appreciated as somewhat of a 'thinking mans' sci-fi film, in the ilk of 2001: A Space Odyssey.

Of note is this Blu-ray release is not the Robert Wise directors edition of the film, as seen on the current DVD release. Due to cost cutting and lack of forward thinking, the new special effects generated for that edition were mastered in 480i resolution (NTSC) and unconverted to 576i for PAL countries. These effects need to be re-rendered in 1080p for any Blu-ray release to occur, but more time (and money) will be needed to make this happen. Perhaps with the success of the latest Star Trek film, the coffers will be opened to make it so. See what I did there?

Star Trek: The Motion Picture is presented in the widescreen aspect ratio of 2.35:1, encoded with the AVC codec.

It's fairly evident that the first Star Trek film has had some pretty major restoration work done. The image is crisp and clear, with a very fine amount of detail. Compared to the old DVD, it also looks like a little colour correction has occurred.

Due to its age and the layered compositing nature of the special effects, there are numerous film artifacts throughout. Whilst many have been cleaned up for the live action photography, in special effects shots they are literally baked into the master - the only way to improve this would be to go back to the original elements and re-composite them digitally - I however doubt these still exist, though.

Overall, the transfer is very consistent and I hesitate to think the film has ever been seen bettered.

Originally released in Dolby stereo theatrically and remixed in 5.1 for the DVD release in 2001, the new Blu-ray release has gone back to the 5.1 mix and extrapolated it a little more. It's a suitably active mix, with quite a bit of surround activity. The fidelity of some of the sound effects is a little dated (I suspect that a lot of the effects from the original series were recycled), but without betraying the original mix, little could be done to improve this. Bass usage is very frequent and underscores the action with some suitably punchy activity.

Jerry Goldsmith provides a fine score, one whose grandeur helps elevate the production values from the original series.

Overall, a fairly pleasing mix, which walks a fine line between respecting the original soundtrack and updating it for the HD generation.

Many of the extras produced for the directors edition DVD have been dropped, purely because they revolved around the restoration of the directors vision, when what we have presented is the original theatrical version. Disappointingly, this also affects the original audio commentary recorded by Robert Wise, who passed away in 2005. Here's what we do have:

Trek experts Michael and Denise Okuda, along with Judith & Garfield Reeves-Stevens and Daren Dochterman contribute to the Audio commentary. Whilst none were involved in production, their knowledge on the film is superb and provide many anecdotes to both flesh out the story in the wider Trek lore and also to the production.

The Library Computer is a very cool BD-Java infused extra which overlays text information whilst watching the film. However, what makes it different to previous in-film text features is that users can select the information they want to view by pressing the enter button when the subject prompt jumps on the screen. As a casual fan, this provides a lot of interesting back stories and anecdotes to flesh out the story that I didn't know.

Next up is a bunch of Featurettes: 'The Longest Trek: Writing the Motion Picture', it's title clearly referencing turning the aborted Star Trek: Phase II TV series into a film and the many re-writes it went through, 'Special Star Trek Reunion' which brings together some of the Star Trek fans who were selected to be in a crowd scene, and'Starfleet Academy Brief: Mystery Behind V'ger' is a brief technical reel on the V'ger cloud, presented in the style of a Starfleet documentary.

The collection of Deleted scenes are in fairly ordinary standard definition quality, but provides a bit more padding to an already talky film. Interestingly, none of these are from the longer directors cut, but culled from an even longer TV version of the film.

Lastly, we have the original Theatrical Trailer, presented in HD and a bunch of TV Spots which look a little worse for wear. 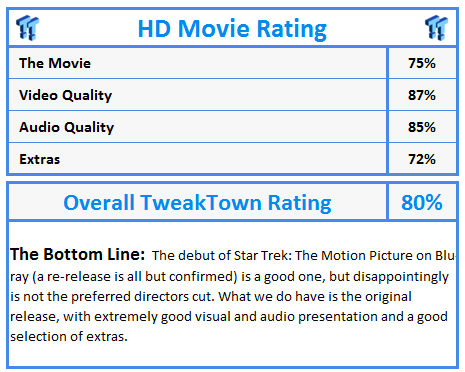