All NewsBusiness, Financial & LegalCases, Cooling & PSUContests & GiveawaysCPU, APU & ChipsetsDealsDisplays & ProjectorsGamingMotherboardsScience, Space & RoboticsStorageVideo CardsVirtual & Augmented Reality
All ReviewsAll ArticlesAudio, Sound & SpeakersCases, Cooling & PSUCPUs, Chipsets & SoCsComputer SystemsDisplays & ProjectorsGamingMotherboardsNetworkingPeripheralsRAMStorageVideo Cards
GuidesGamingAsk the ExpertsNewsletterAboutForums
RTX 3090 TiRTX 4090Diablo 2GTA 6Halo InfiniteElon MuskRTX 3080HDMI 2.1
TV, Movies & Home Theatre
Blu-ray Movies
The intention with Planet Terror was to release both this film and Quentin Tarantino's Death Proof as a back-to-back double bill; two films in one. Both were to be released under the banner of Grindhouse, which harkened back to the days in the U.S. where 70's schlock was played in run down cinemas, with terrible beaten up prints. However, upon release, the film bombed, with general audiences having trouble understanding the concept behind it.

Ultimately the decision was made to split the two films up, pad out the run time by a little and release them to cinemas as such. This decision had the undesired effects of making fans feel somewhat ripped off, by making them pay twice for the same content and this is how the films were released to home video.

Planet Terror is Robert Rodriguez's tribute to B-grade zombie horror. It's full of gratuitous gore, sex and violence. Every frame has simulated wear and tear. The acting is hammy and the plot is threadbare and silly. But my, what fun it is. Essentially the plot consists of a zombie takeover of Austin, Texas, following the desperate plight of a rag tag group of survivors, led by an ex-stripper whom has a machine gun for a leg. Did I mention it's not serious at all; it's just entertainment at its cheesiest best.

I will take a look at Quentin Tarantino's other half of Grindhouse; Death Proof soon.

Planet Terror is presented in the widescreen scope aspect ratio of 1.78:1, encoded in MPEG-4 AVC.

It's extremely hard to review a movie such as this, which was made with the clear intent of looking and sounding like a world worn, vintage film. Everything I would normally mark down a transfer for is here and accounted for; colour bleed, print artifacts and overt grain. Of course, this is the aim of the movie and as a reflection of the movie makers intent; this is actually a wonderfully accurate presentation. I detected no issues that I believe weren't intended, which would otherwise constitute a problem with the production of this as a Blu-ray disc.

My most bizarre review yet. 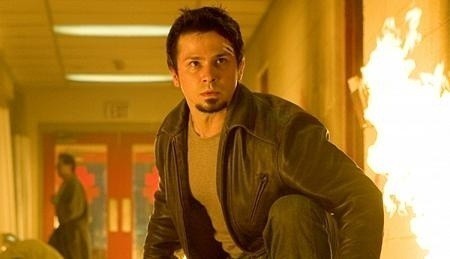 The main audio track here is an English Dolby TrueHD, encoded at 16 bits.

Similar to the video, the audio has been artificially aged, with frequent pops and crackles. But, make no mistake, this is a top tier audio track which, in terms of clarity of sound and surround usage, is up there with the best that is offered today.

However, I can't shake this thought of why, with all the effort put in to age the film, why it wasn't released in mono or basic stereo? - Surely Grindhouse-type cinemas only operated in mono? - But I guess this is not so much of a complaint, but a thought.

Robert Rodriguez has always heaped attention on his DVD supplements and this Blu-ray is no different. Let's take a look.

Director Robert Rodriguez flies solo on the audio commentary, he's a film fan at heart and this shows. He's seemingly quite proud of the film and the effects that were employed to give it the Grindhouse look. The second audio commentary is labeled as Audience reaction track and I suspect it was recorded at one of the premieres - probably Rodriguez's home town of Texas, judging by the very vocal audience. It's a nice idea and very much in keeping with the vibe of the film, but I elected not to watch this one through.

The full length Scratch free version, which is the near full version of the film, including the jump cuts and 'bad edits', but minus the digital scratch effects. A nice inclusion, but I doubt most fans of the movie will elect to watch it this way.

Next up is a bunch of featurettes; 10 minute film school is a look at the more technical side of production, including both visual and practical effects and achieving the aged look of the film. The Badass Babes of Planet Terror is a fairly straight forward look at the female characters of the film. It needs to be said that Rose McGowan is a very attractive lady. In the fairness of sexes there's also a The Guys of Planet Terror which is basically the opposite of the former.

Casting Rebel is concerned with Rodriguez's casting his own son in one of the smaller roles - casting family members is a constant Rodriguez habit. You'll see more evidence of this in the next featurette: The Friend, the Doctor and the Real Estate Guy. Sickos, Bullets, and Explosions: The Stunts of Planet Terror looks at the production of some of the outlandish effects of the film.

Finally, we have a look at two elements of the marketing of the film, with the films theatrical trailer and a compilation of art in the poster gallery.

The only other extra is a seven minute outtake reel, in SD quality. There was some very obvious fun on the set that I can take from it. 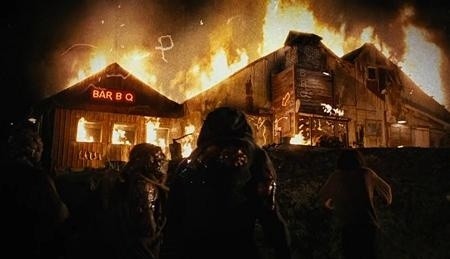 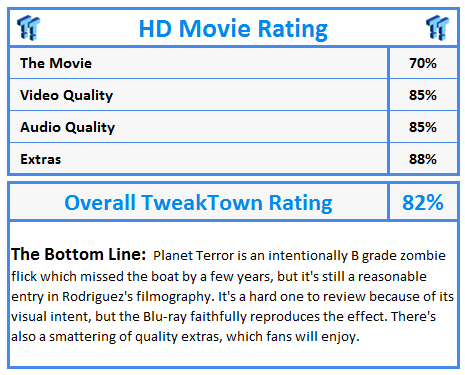