While the ASUS ROG Strix Scope RX might have been designed for those that dabble in FPS gaming first and foremost, ASUS's excellent linear switches impress for just about any task. Stylish and great value for money.

The rise of the mechanical keyboard over the past decade owes a lot to the one genre in the PC gaming space that kicked off the dual mouse and keyboard setup - the first-person shooter. A genre that came to prominence in the 1990s with the likes of Doom and Quake, when all keyboards were that weird beige color and created using the relatively mass-market and cheap membrane style of switch. 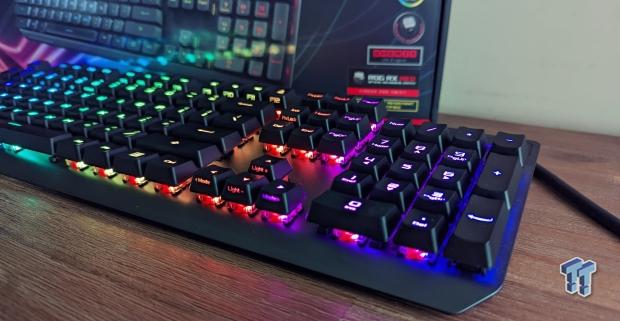 Smash cut to 2022, and if you're looking at getting a decent keyboard for your gaming needs, odds are it's going to be mechanical and feature a suite of customization options alongside a dose of RGB lighting. ASUS's new ROG Strix Scope RX ticks all those boxes as the latest mechanical gaming keyboard from the hardware maker, but it's also one that has been created specifically for fans of the first-person shooter.

A design decision that informs the style of mechanical switch deployed, the overall look and feel of the Republic of Gamers aesthetic, and even the size of the left-side Control key. Which is larger than normal here on the account of it being a handy key for FPS titles - so why not make it bigger? The ROG RX Red Optical Mechanical Switches, created by ASUS, sit on the linear, fast, and responsive side and are impressive in both accuracy and tactile feel.

Speaking of feel, there's also the sturdy alloy top and IP56 water and dust resistance keys rounding out the build, which results in a smooth keyboard experience that's great for everyday productivity. 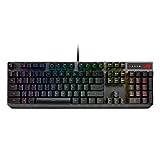 There was a time when mechanical keyboards featured switches from one or two different suppliers, and that was it. The color and 'clicky'-ness determined what sort of performance you got from each keystroke, even though the decision ultimately really came down to whether you wanted a 'clicky' sound or not.

ASUS, like many other peripheral makers, has decided to invest in creating its own line of switches, with the ROG RX RED Optical Mechanical Switches found in the ASUS ROG Strix Scope RX sporting a similar design approach to other silent Linear switches out there. It's all about that lightning-quick response and keeping a low and fast actuation point, appealing to those that press a lot of keys over a short time. Gamers.

Here you've got 4mm of travel, with a 1.5mm actuation point requiring 40g of force. ASUS notes that 55g of force is required for perfect feedback, so they're not the most sensitive switches we've seen - but that's another design feature you can chalk up to the FPS approach, where accidental keystrokes should be avoided where possible.

The ROG RX Optical Mechanical Switches sit at the heart of the ASUS ROG Strix Scope RX keyboard, and with their 1ms response times and 100-million-keystroke lifespan, they're certainly impressive. This paints a similar picture for the rest of the design, which includes durable ROG keycaps that have a great feel and stylish translucent ROG look to match the tactile nature of the switches. The minimal floating key look is robust thanks to the sturdy alloy top, water, and dust resistance, and the nice and hefty 1.07kg weight.

There's a certain ASUS ROG-ness to the look, too, with the font used on the keycaps being ROG - not to mention the quality of the per-key Aura lighting being some of the best available. Weirdly though, the USB cable is something of an outlier, in that it's thick and stiff, and not detachable.

As the ASUS ROG Strix Scope RX supports USB-passthrough it requires two USB ports on the PC side for that, so the result is a chunky cable on the keyboard side. We're talking about USB 2.0, too, so we would have preferred a single port flexible cable that tucked away neatly - as opposed to the desk anaconda you've got here.

In our recent review of the ASUS ROG Delta S Wireless Gaming Headset, there was some shade thrown in the direction of the native ASUS Windows 10/11 app Armoury Crate. The software suite used to customize, configure, and manage all the ASUS-related bits of plastic and silicon found inside and outside of your rig. Long story short, it can be temperamental.

In the case of the ASUS ROG Strix Scope RX keyboard though, the results were, well, different. The experience was mostly stable and issue-free, but that goodwill extended to the keyboard's customization features which are exceptionally well-realized and laid out. 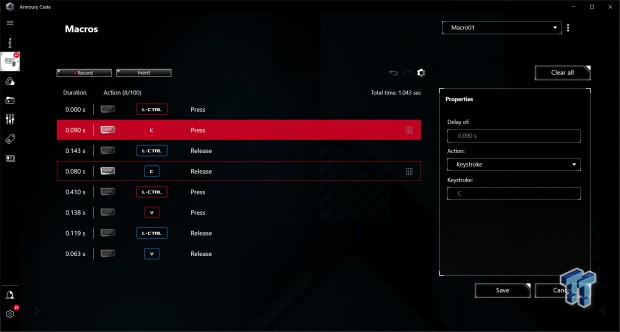 The ability to record Macros on-the-fly and then edit each of the keystrokes and timings is not only intuitive but inviting. This side of keyboard customization is often set aside by most gamers, so if you're of the sort that plays a handful of specific games or utilizes a specific set of productivity apps, then Armoury Crates' Macros tool is wonderful. This ease of use carries over to the per-key customization, where you can adjust functionality and create onboard profiles. Lighting adjustments are also intuitive, and thanks to ASUS's Aura tech, there's a lot to choose from.

As a keyboard designed for first-person shooters, it's only natural to fire up a bunch of them to see how it performs. For that, we chose DOOM Eternal, Apex Legends, DEATHLOOP, and even a bit of Quake II RTX. Even though the ROG RX RED Optical Mechanical Switches require a bit more force than some Linear switches, they feel great in action.

From slaying demons in DOOM through to the more tactical stealth-based action of DEATHLOOP, it was there where the subtlety of having a larger Control key made sense. Keystrokes were all triggered without a hitch, with circle strafing and firing off rockets in DOOM feeling seamless. Then there's the added benefit of gaming mode features that disable Alt-TAB and other potentially round or stage-destroying functionality to keep you in the game. 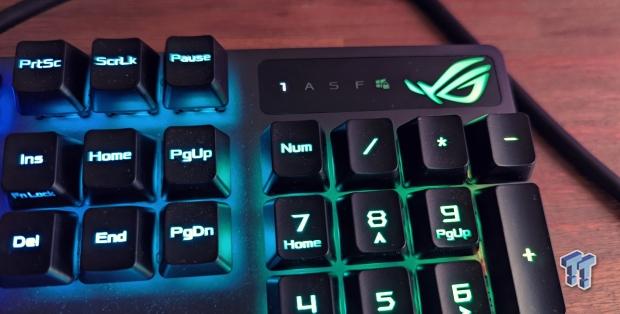 As something designed for FPS titles, it's safe to say that ASUS has done a great job in terms of performance and feel with the ASUS ROG Strix Scope RX. The style and tuning of the switches are great - with the actuation and force requirements hitting a sweet spot for the titles we played. For the more competitive gamers out there, the Linear style here could be a little stiff, but that will come down to personal preference.

Although it's easy enough to chop and change between profiles, Armoury Crate lets you set up profiles on a per-game basis which is very cool. Though fair warning, if you let it add hundreds of Steam games, the software doesn't handle it very well, so it's best to keep it to games where you want a specific layout and lighting setup. Having lighting, shortcuts, and profiles change depending on the game being loaded is a great feature.

If you spend as much time doing work stuff or simply chatting on Discord as you do playing games, then the ASUS ROG Strix Scope RX still impresses and has a great feel. The ROG RX RED switches are a bit stiffer than other similarly fast Linear switches, but the result is a good fit for typing.

It's also here where we see some cool onboard features like quickly switching between the F5-F12 keys doing their regular F-style functions versus becoming dedicated media controls. There's also a 'Stealth' key that minimizes all apps and mutes all sound, which is kind of like a 'quick the boss is coming' key, and it works. The ease of setup and ability to record Macros also add to the productivity chops.

To test the overall sound level of a keyboard, we use the Ozito Digital Sound Level Meter capturing the sentence "the quick brown fox jumps over the lazy dog" multiple times and recording the maximum dB level. This is to give an indication of how "loud" the switches used are for everyday usage. 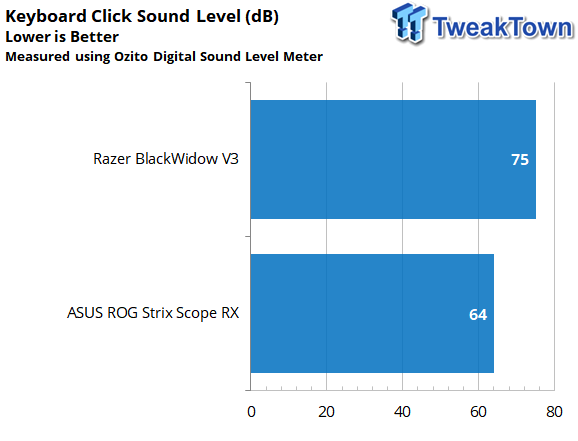 The ASUS ROG Strix Scope RX delivers, and ASUS's own ROG RX Optical Mechanical Switches are fast, responsive, and accurate. As a gaming keyboard designed specifically for FPS players, the ROG look and feel certainly has that gamer style that is synonymous with the ROG brand. The build quality is great, not only in terms of the parts used but little stylish touches like seeing the switches do their thing and the sleek rounded angular edges on the alloy top-plate. 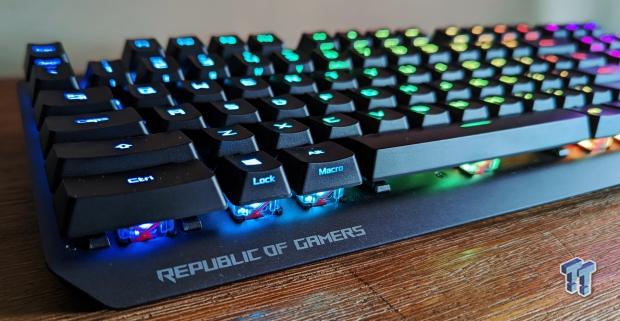 Ultimately, personal preference comes into play when you're talking about a style of the mechanical switch and things like actuation points and so forth. That said, ASUS ROG Strix Scope RX is hard to fault. The only real downsides come with the overall physical design, a chunky USB cable that isn't detachable, two USB ports on the PC side for pass-through, and the lack of any bonus niceties like replaceable keycaps or even a wrist rest.

The good news is that the ASUS ROG Strix Scope RX isn't strictly an FPS keyboard, and by specifically tuning the actuation and force to deliver a more tactile feel compared to some super-fast Linear keyboards, ASUS has delivered a great all-rounder.

The customization options and controls on board and within ASUS's Armoury Crate software are as great for productivity and non-game-related apps as they are for use in-game. And thanks to ASUS Aura, it has some of the best lighting in the game.

While the ASUS ROG Strix Scope RX might have been designed for those that dabble in FPS gaming first and foremost, ASUS's excellent linear switches impress for just about any task. Stylish and great value for money.