Samsung's T7 Shield is designed with some key factors in mind. First off, and as its naming indicates, the T7 Shield will keep your data supremely protected from accidental physical harm, including dropping, moisture, dust, or heat. The T7 Shield is drop-proof tested to a height of 3 meters, moisture tested with fresh water projected from a nozzle 3 meters away at 12.5 l/min for 3 minutes, and dustproof verified to a level of IP65 rating based on internal testing conducted under controlled conditions.

Now, these are just internal testing specs and not what the T7 Shield is actually warranted for. Samsung states the T7 Shield is actually not covered under warranty for damage due to moisture, droppage, or dust contamination. This makes sense because Samsung has no way of knowing if the degree of physical damage exceeds its stated performance specs. We can say the device itself certainly feels as if it could easily withstand substantial abuse. This device is unquestionably tough.

Secondly, the T7 Shield is designed for high sustained write performance as the drive fills up. This becomes very important for super high-resolution video such as 8K, where a sustained write speed of 900 MB/s is required. Samsung states the T7 Shield 1TB, and 2TB models can, with an ambient temperature of 25℃, maintain above 900 MB/s sequential write for its full capacity. Impressive.

Finally, the T7 Shield promises broad compatibility due to its very low power requirements. The T7 Shield is power-efficient and follows USB power specifications which allows it to be compatible with a broad variety of host devices. This is great as we see it because most compatibility issues stem from the host device's power delivery being USB compliant when the portable SSD needs more than what the host USB port is delivering. Ideal for phones and other low-power mobile devices.

Okay, let's see what kind of performance the T7 Shield 1TB is serving up when employed as extended PC storage. 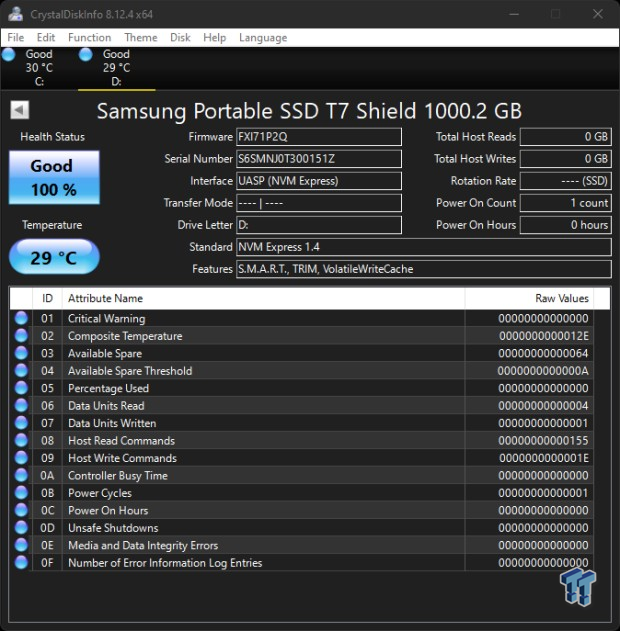 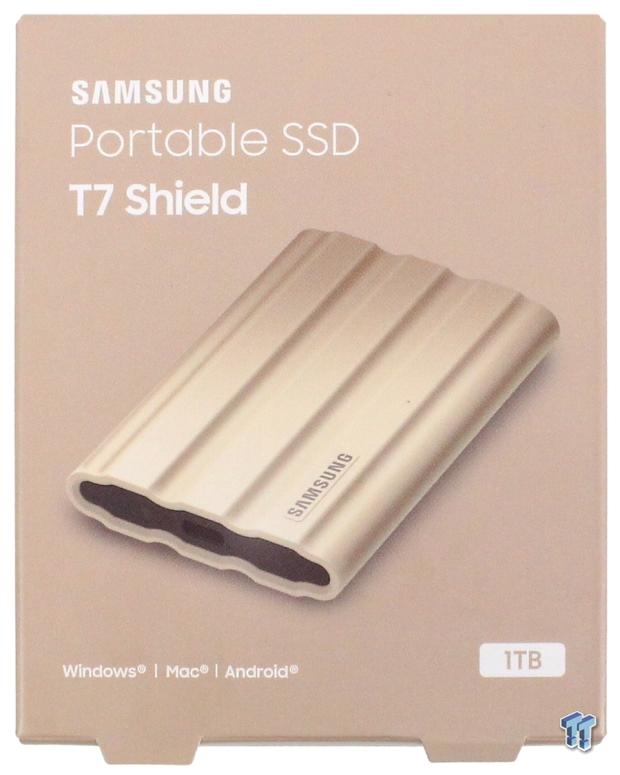 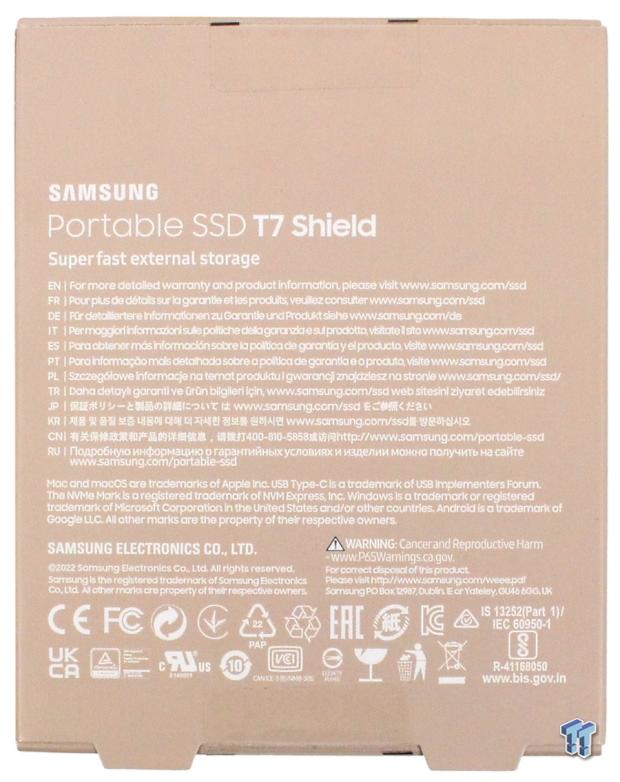 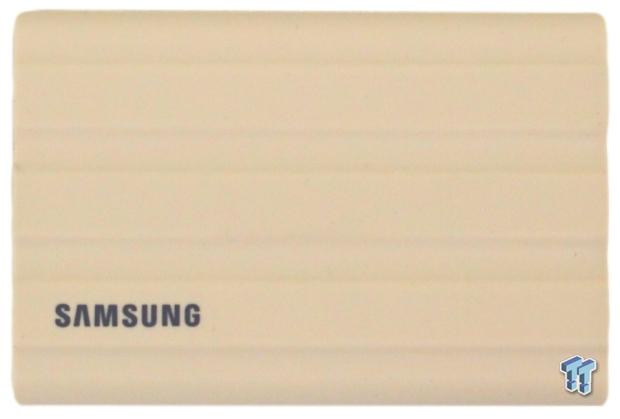 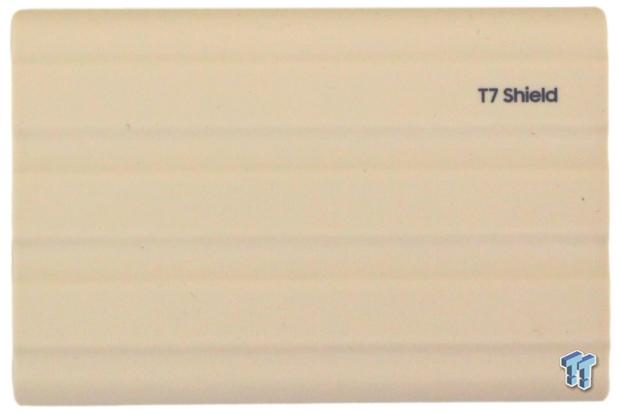 The T7 shield is the kind of quality that is hard to describe with words and needs to be felt in hand to appreciate its build quality fully. 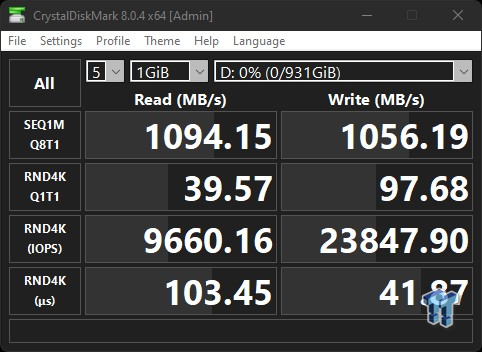 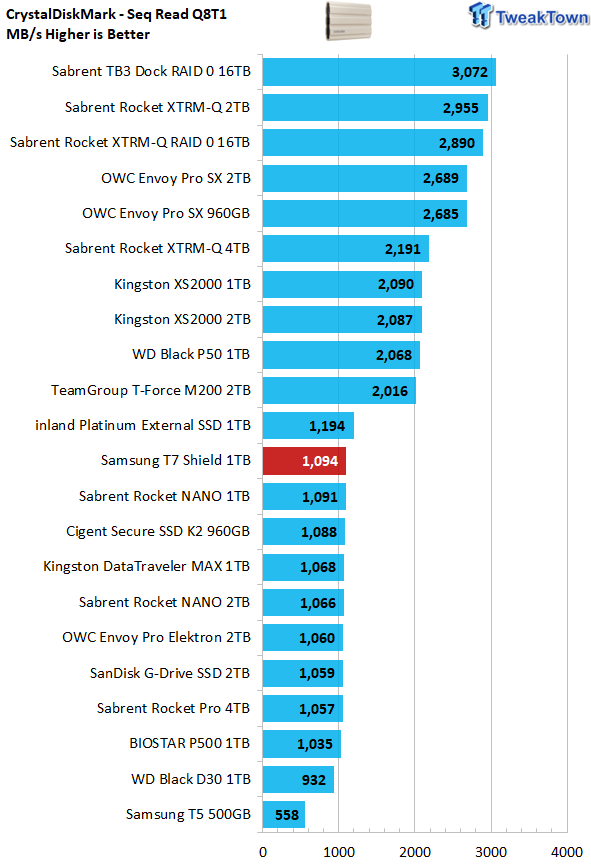 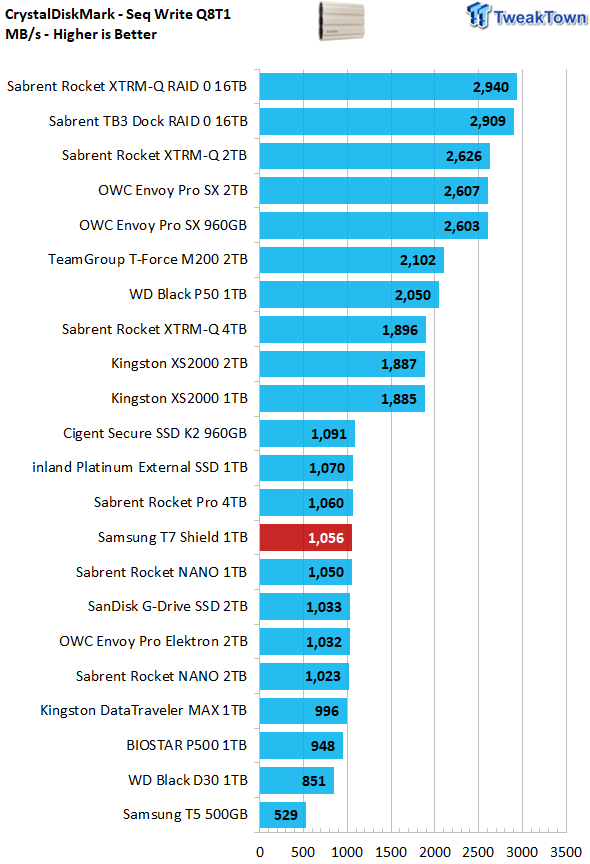 We have no issue hitting the above advertised sequential throughput. In fact, the T7 Shield is delivering as good as we've ever seen from a 10Gbps interfaced portable device. Excellent. Furthermore, the T7's low queue depth random performance indicates it can deliver nicely if employed for gaming or data drive duties. 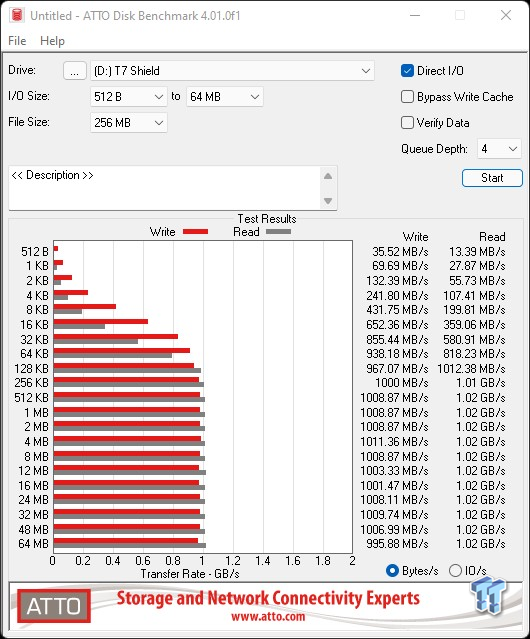 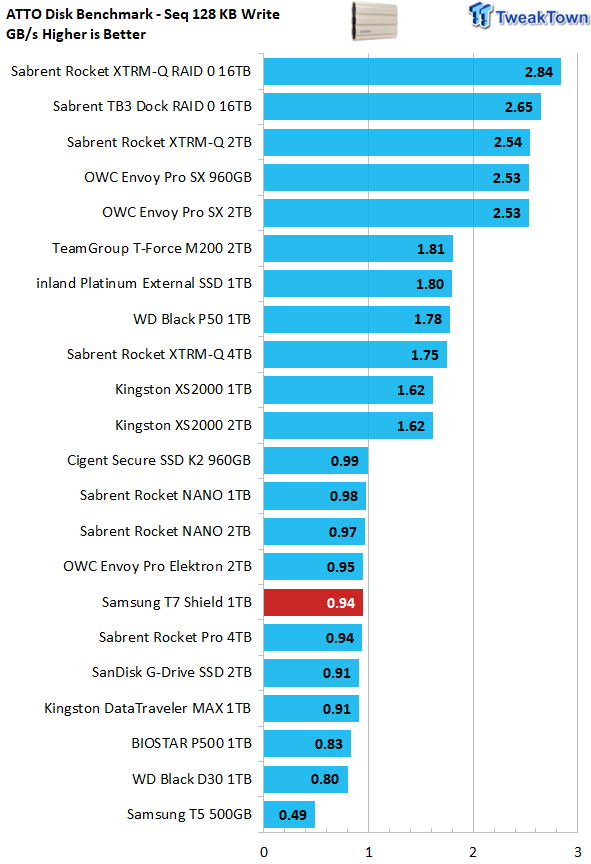 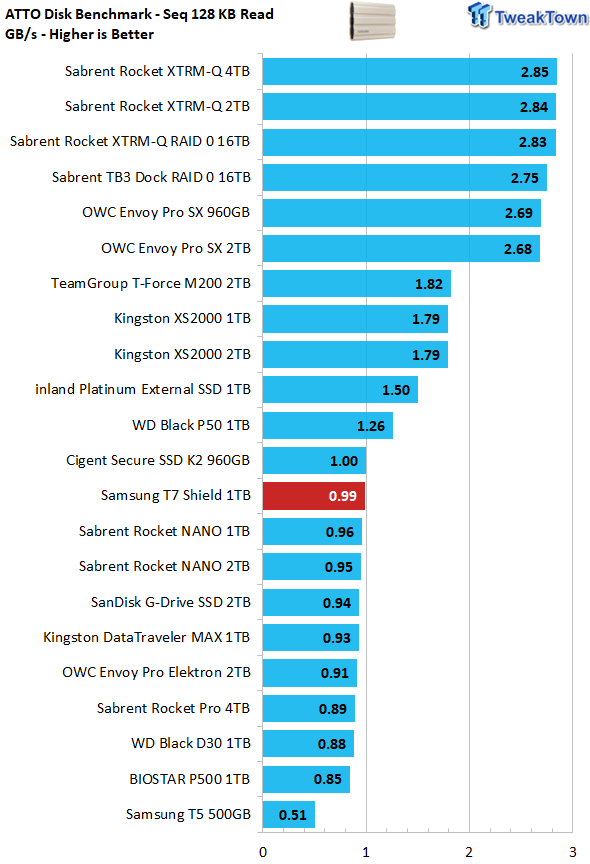 ATTO demonstrates the T7 Shield 1TB delivering full performance at 128K transfers. Exactly what we like to see from any storage device. 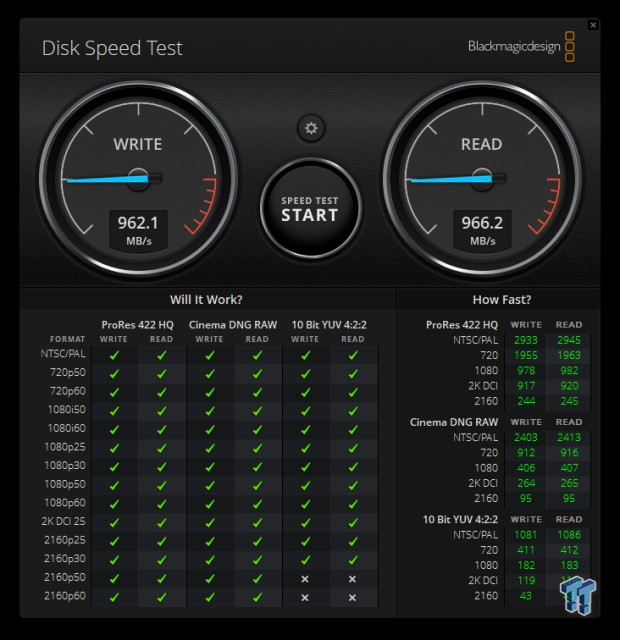 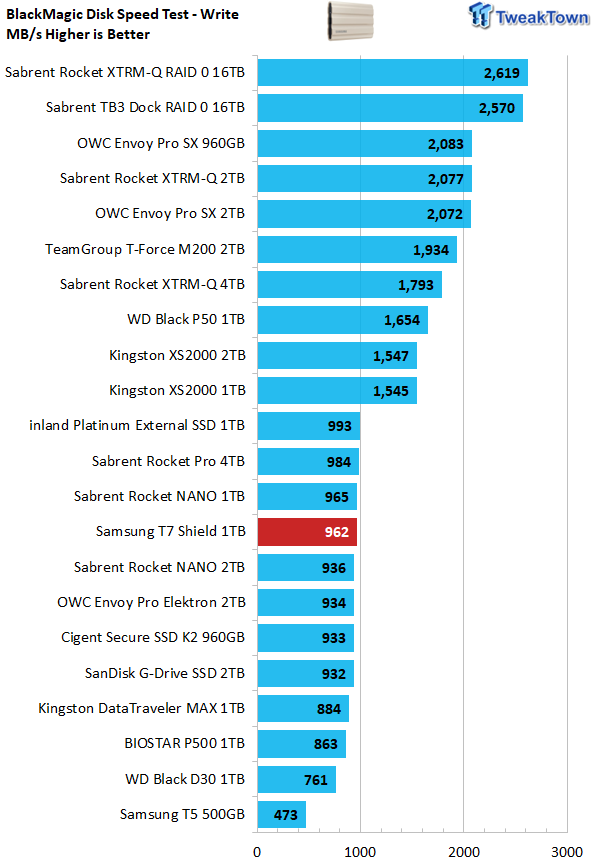 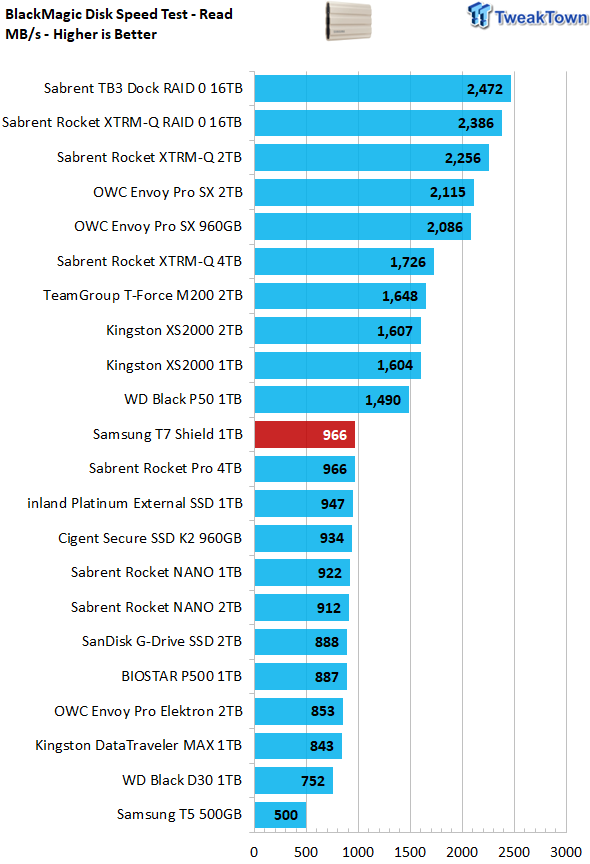 Our BlackMagic results verify the T7 Shield can deliver well over the 900MB/s sequential write speed necessary for 8K video. Our 1TB model is in fact delivering the best write results we've seen to date from a 10Gbps interfaced device. Impressive. 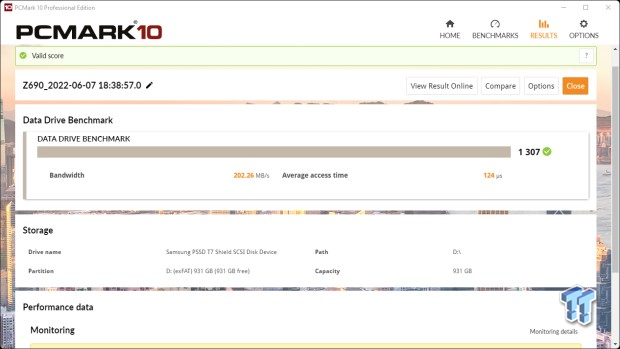 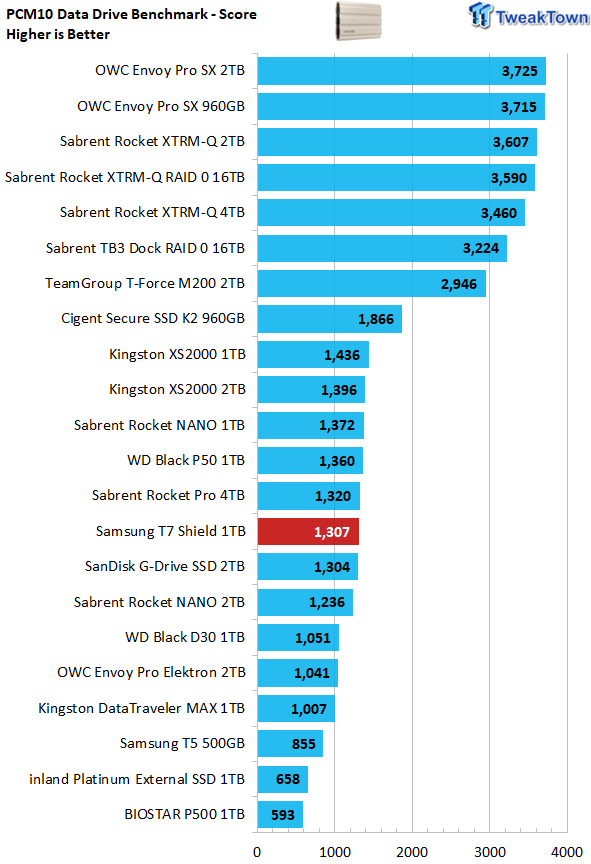 As our CDM random results indicated, the T7 Shield 1TB makes for an excellent extended data drive. This is especially impressive for a device running within USB power specs. 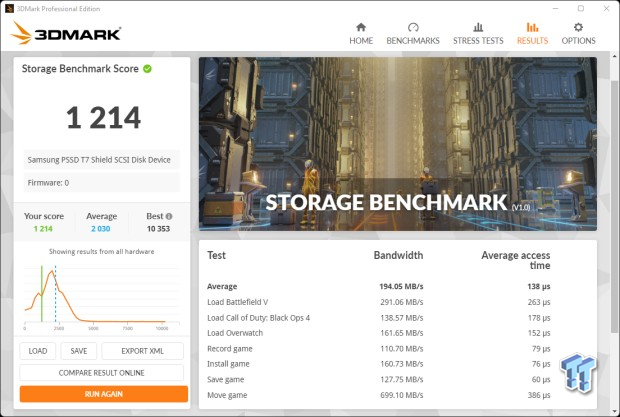 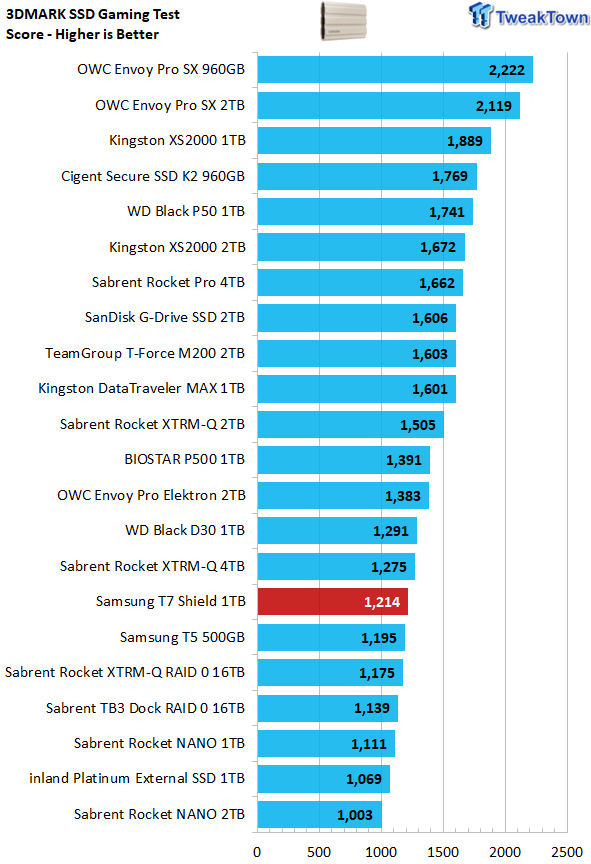 Gaming is a performance metric that matters to the majority of DIY consumers, especially to the enthusiast crowd that TweakTown caters to. We are now including gaming performance as a part of our external SSD reviews as using portable storage for gaming duties is very popular among avid gamers. If you want to use the T7 Shield for a portable game drive, it will do an excellent job. 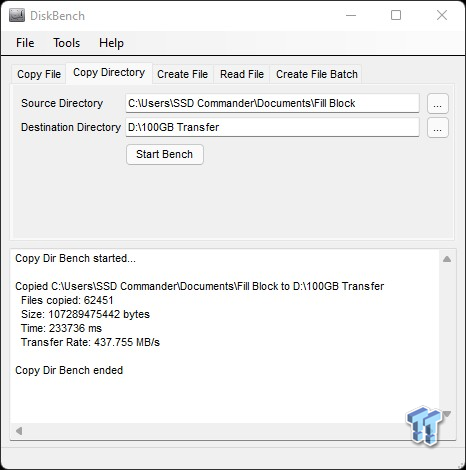 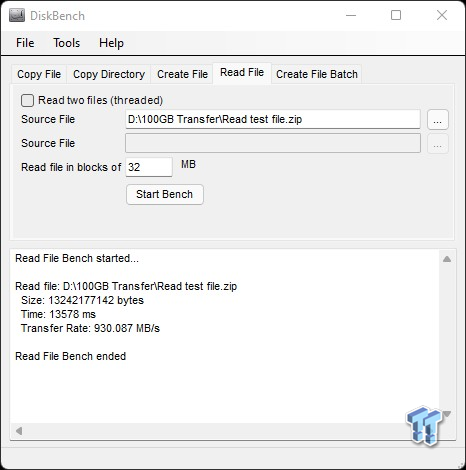 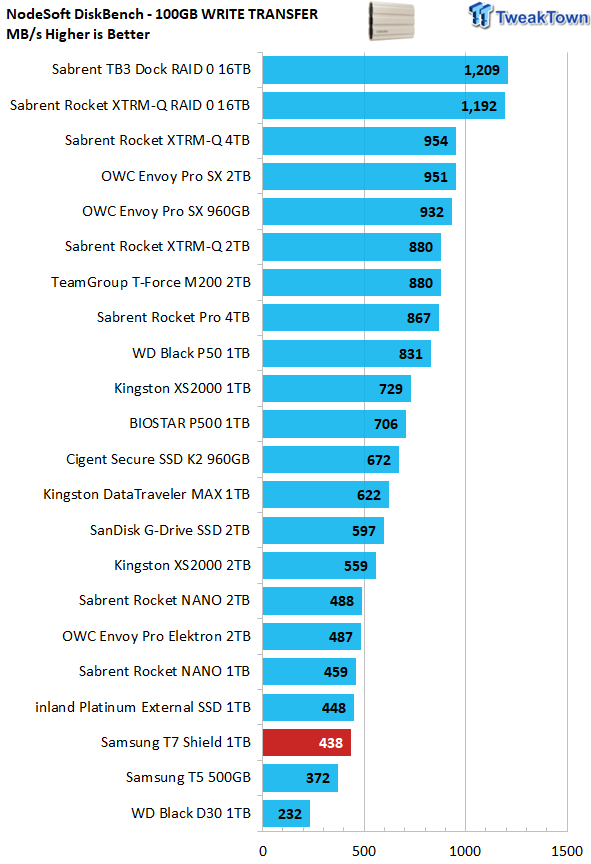 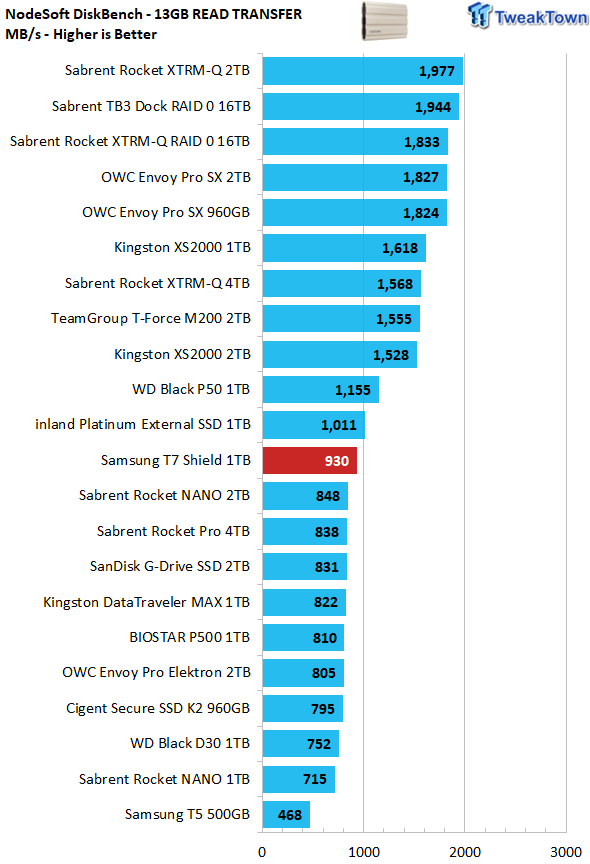 We brutalize our test subjects with our extremely hard-to-swallow 100GB data block. This data block is the same one we use for our internal SSD testing and is composed of more than 62K files. This is where the rubber meets the road for a portable SSD used for PC data storage (not video files). Keep in mind that the use case scenario for the PC consumer space is write infrequently, read frequently.

In the world of portable storage, compatibility is king, and the T7 Shield is highly compatible due to keeping its operational power draw within USB specs. This is where many portable SSDs fail in the compatibility department, and they need more power than the host device can deliver. As we see it, this is the T7 Shield's greatest strength.

Aside from its superior compatibility, we are impressed with the drive's stated capability to maintain 900 MB/s sequential write until filled. That's almost unheard of and a huge accomplishment. We did not test this firsthand as that type of test is not a part of our test regimen. However, Samsung's track record of delivering as advertised is very good, so we are inclined to take it as a factual statement.

Finally, the T7 Shield impresses with its rubber-clad armor and impressive IP65 validation. Basically, this drive is quality and performance personified, and as such, is worthy of our highest award. 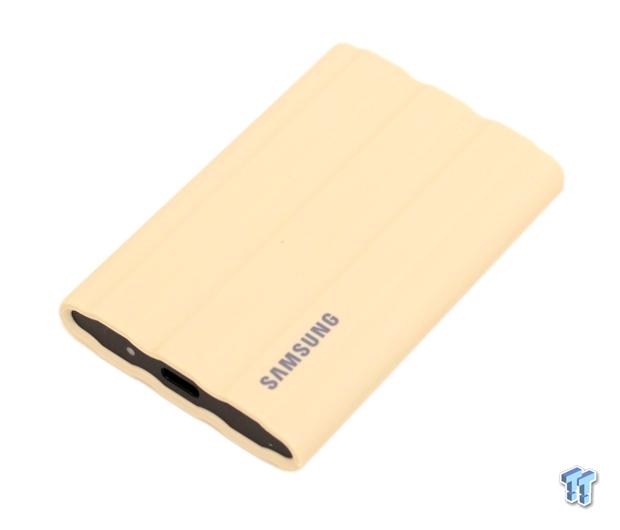 Able to sustain 900 MB/s sequential write until full, Samsung's T7 Shield 1TB is a cut above the rest.