You demand the best there is? Well, here it is.
Buy at Amazon

After reviewing Sabrent's 16TB XTRM-Q Thunderbolt 3 portable SSD last year, we figured it would take quite some time before something in the portable universe would surpass it in terms of overall capacity and capabilities. Well, here we are 9-months later, and as far as capacity goes, nothing has even come close, with 8TB portables being the closest any retail competitor has come to challenging Sabrent's capacity champion.

Even then, as it has always been, other brands' 8TB offerings are more of a mythical creature than anything else. Have you ever seen a non-Sabrent 8TB NVMe consumer SSD reviewed or in use anywhere? We sure haven't, which is why when it comes to extreme capacity SSDs, Sabrent is the leading and, as we see it, the sole purveyor of extreme capacity consumer NVMe SSDs.

Now, 8TB of fast NVMe storage on a single 2280 PCM is amazing on its own, but then having the stones to double that to 16TB? In the consumer realm? Only Sabrent is hardcore enough to do it. When Sabrent's 16TB XTRM-Q dropped last year with a whopping price tag of three grand, we weren't sure how well it would sell, but apparently, Sabrent could hardly make them fast enough to keep up with demand. Build it, and they will come.

Build it better and even more will come is where we are at for today's review. What we have on the bench today is even better than our first 16TB SSD experience. At its heart, it's essentially the same storage solution as the 16TB XRTM-Q, but that's where the similarities end. Sabrent's Thunderbolt 3 Dual NVMe Docking Station is, as the name indicates, a powerful brick of workstation level IO for your PC or MAC. This device can do it all, including powering your laptop; everything is done from a single TB3 cable. Amazing.

The first thing in terms of IO that caught our eye while looking over Sabrent's Thunderbolt 3 Docking Station is it has a full-size DisplayPort 1.4 connection at the back. Perfect. This is certainly a welcome offering for a laptop or, in our case, a NUC 11 Pro. Why? The resolution, HDR, and refresh rates that far exceed what HDMI offers are why. As the below images show: 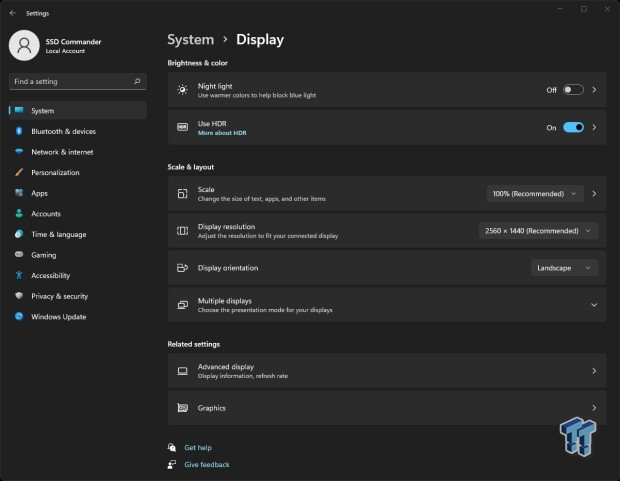 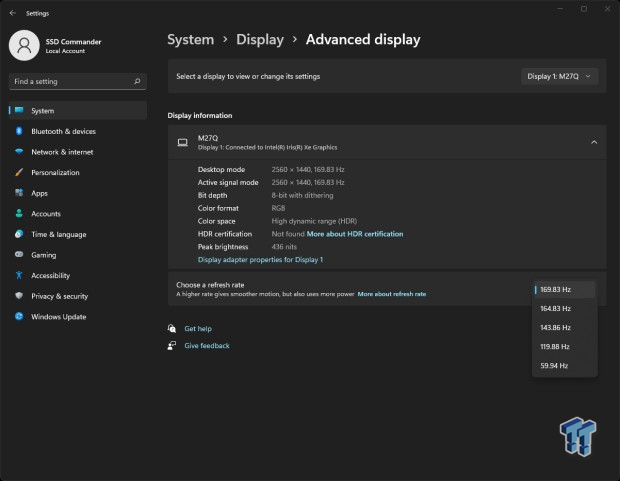 For the first time ever, we can use our monitor to its full capabilities running from our NUC. Outstanding and just one of the plethora of features on offer from Sabrent's TB3 Docking Station.

This 16TB storage device has so many IO features that it demands we chart as many as possible as they relate to storage performance. We will chart the internal storage as a 16TB RAID 0 volume and as a single 8TB volume. We will show screenshots of our benchmarks for the 16TB RAID 0 Volume. Additionally, we will fully chart USB C 10Gbs, USB A 5Gbs, and Thunderbolt 3 performance. Finally, we will chart the built-in UHS-II SD card slot where it makes sense to do so. 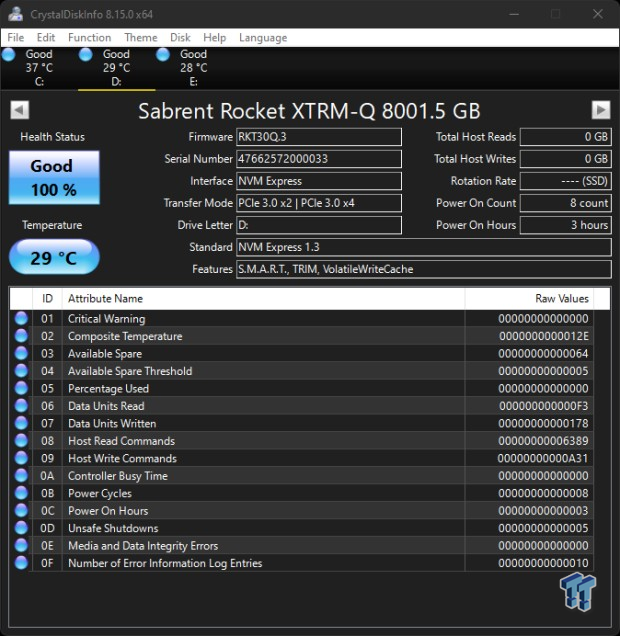 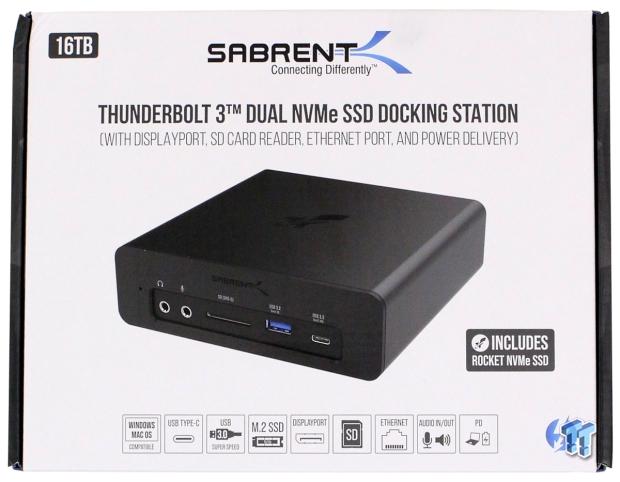 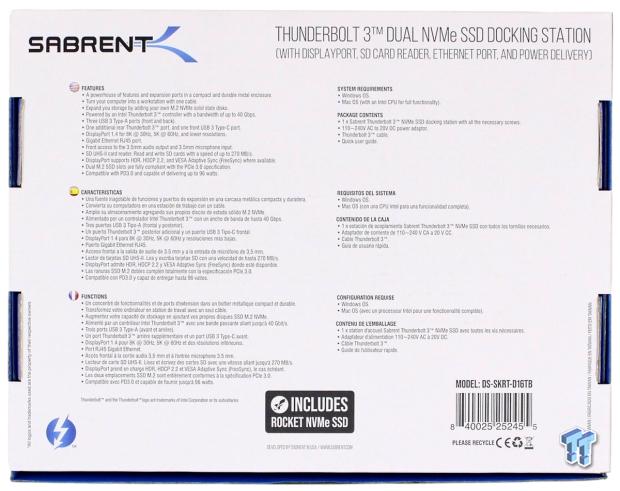 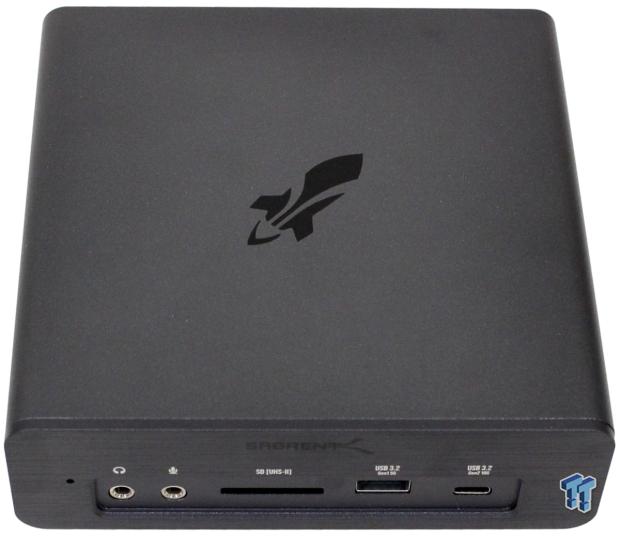 The device itself is compact at 5.55 x 5.57 x 1.7 inches, solidly constructed, mostly of aluminum. It has a nice heft to it, and a quality feel about it. Across the front of the device, going left to right, we have a speaker jack, microphone jack, UHS-II 270 MB/s SD card reader, a 5Gbps Type-A USB port, and a 10Gbps Type-C USB port. 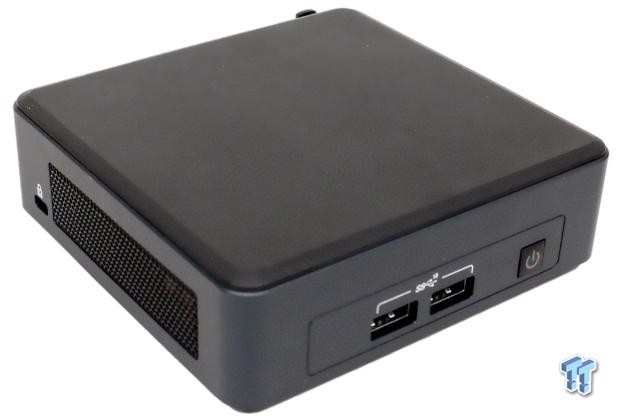 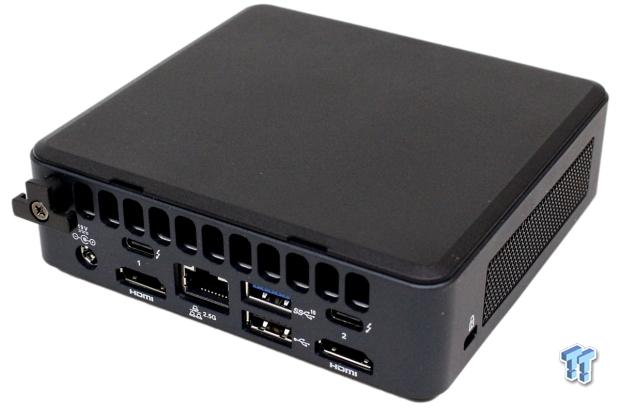 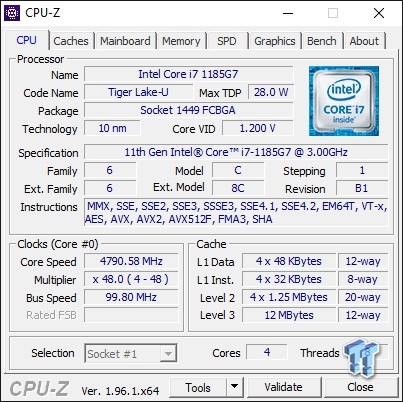 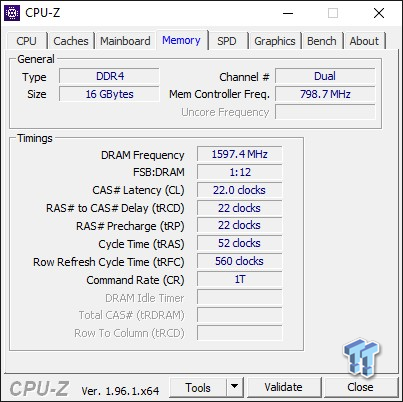 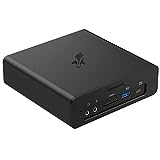 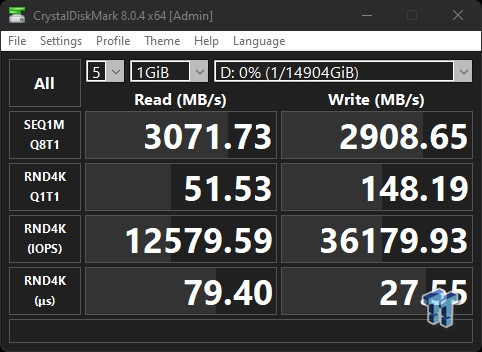 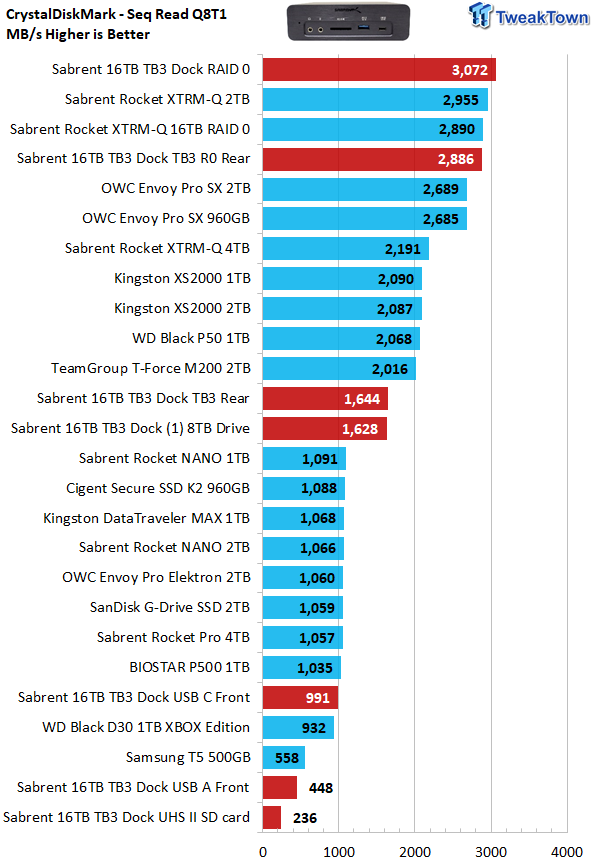 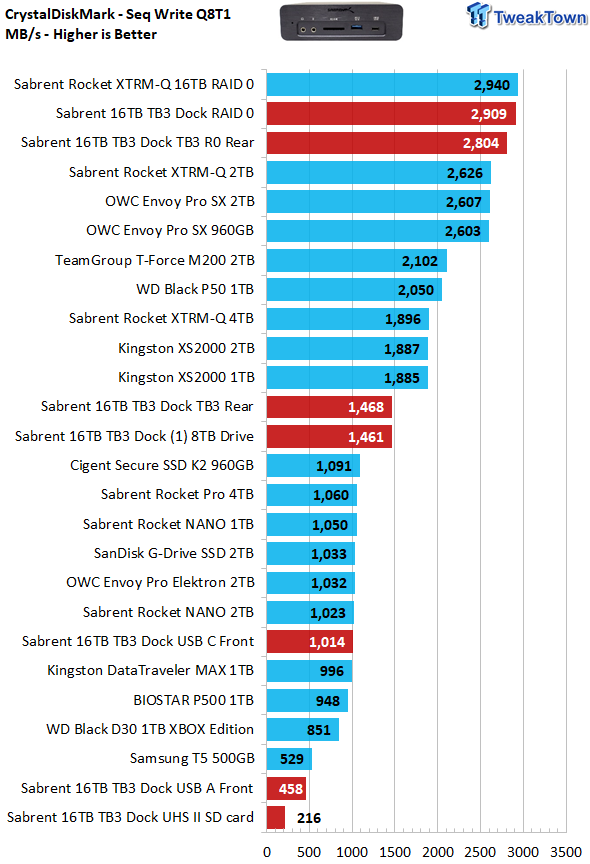 Here we are charting seven different storage IO configurations, including UHS-II. The two onboard 8TB Rocket Q SSDs running in a software RAID 0 configuration deliver the highest throughput at well over 3,000 MB/s. Impressive, as it's the highest we've ever seen or recorded for an external storage device. Sabrent specs its TB3 dock as capable of up to 1,500 MB/s, but as you can see, under the right conditions, it can do double that.

Everything else checks in where we expect it should be in terms of throughput. Keep in mind all this is coming from a single TB3 cable. We will mention we are using Sabrent tool-free enclosures with TLC SSDs for USB and external TB3 testing. 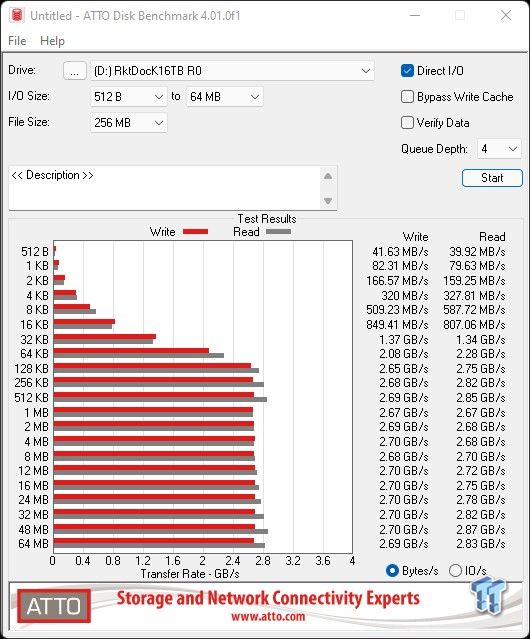 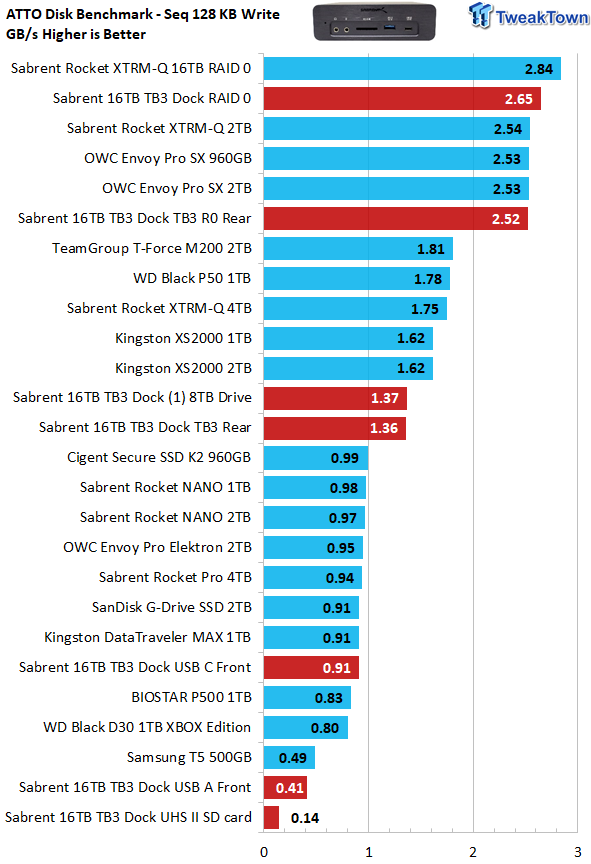 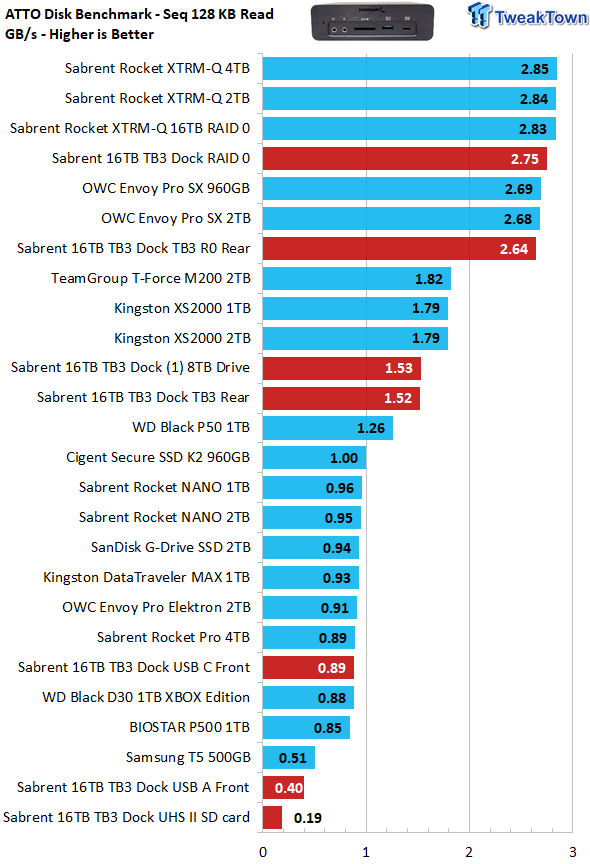 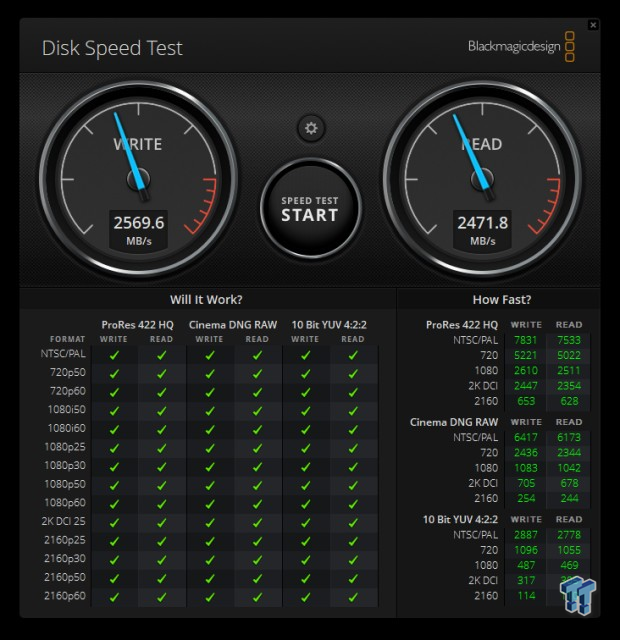 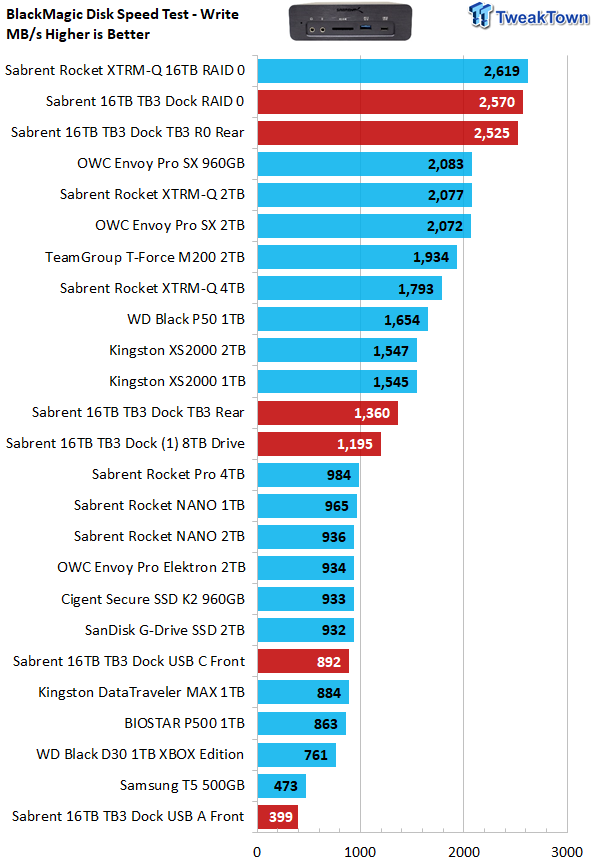 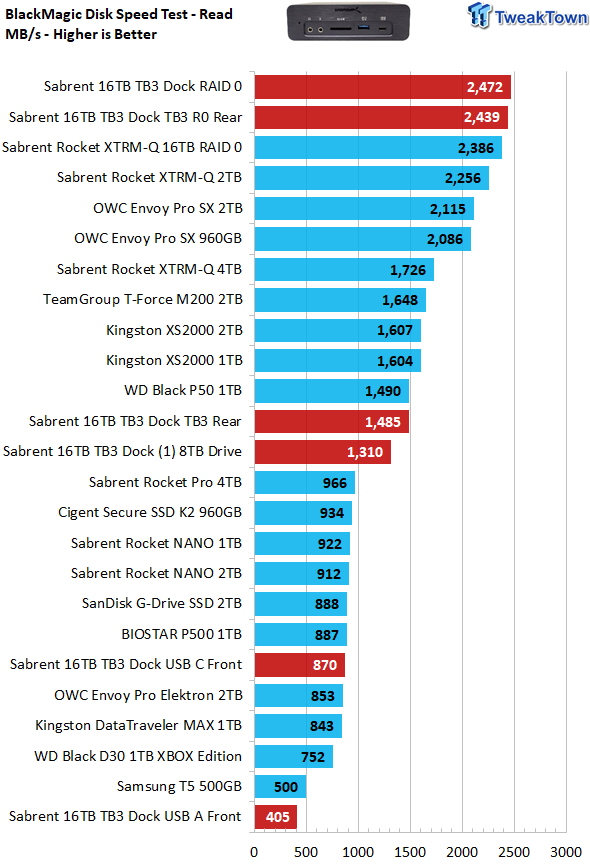 Our BlackMagic results indicate Sabrent's portable RAID-capable devices, such as the 16TB Docking Station we are reviewing today, are ideally suited for content creation. As we see it, the portability, capacity, and flexibility that this 16TB dock has on offer is literally unmatched in the industry. As such, we believe it to be the ultimate content creator's companion. 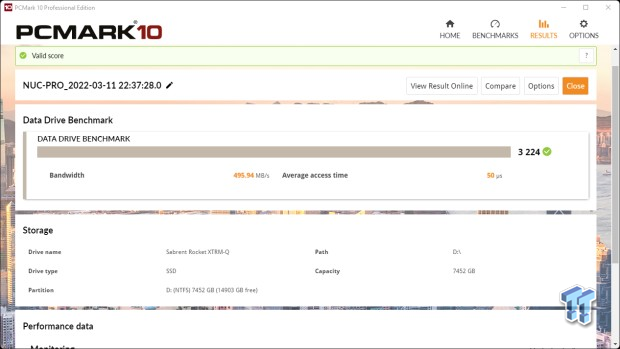 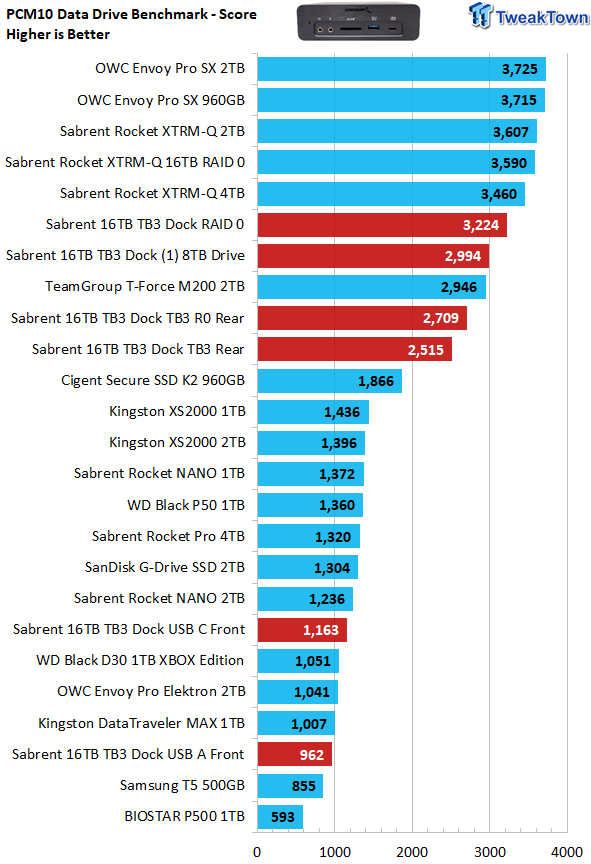 The internal SSDs of our 16TB dock are well suited for data duties where random performance is more important than we've seen to this point. Here the Dock's internal QLC SSDs are outperforming the TB3 attached TLC SSDs, which is as impressive as it is surprising. 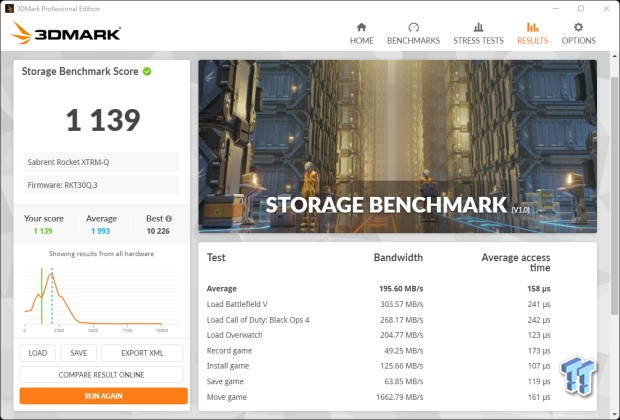 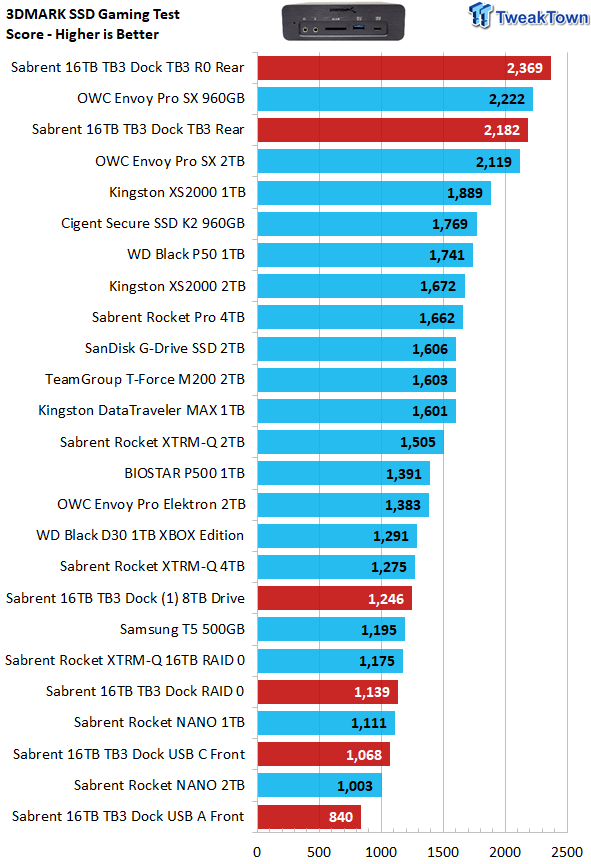 Gaming is a performance metric that matters to the majority of DIY consumers, especially to the enthusiast crowd that TweakTown caters to. We are now including gaming performance as a part of our external SSD reviews as using portable storage for gaming duties is very popular among avid gamers. Here, the docking station's internal QLC SSDs prove not to be well suited for gaming duties. However, with the IO connectivity on tap, all you need for desktop equivalent PC SSD gaming performance is to plug a TLC-based portable TB3 device. Impressive. 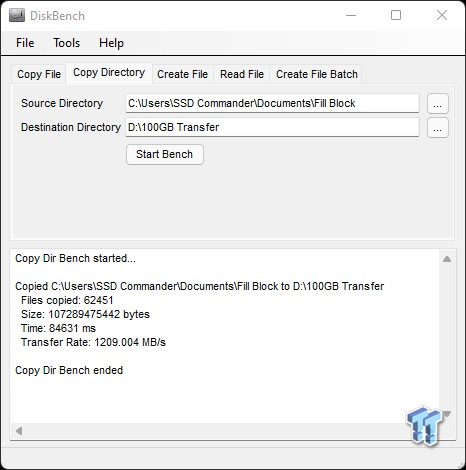 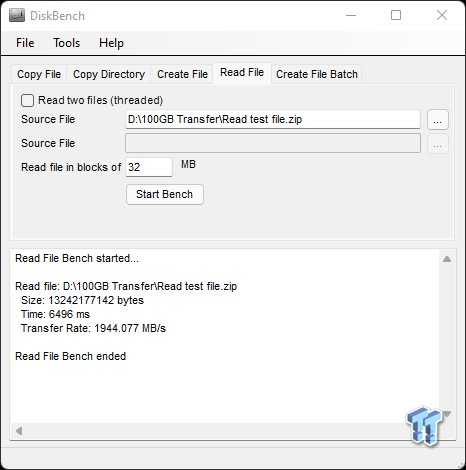 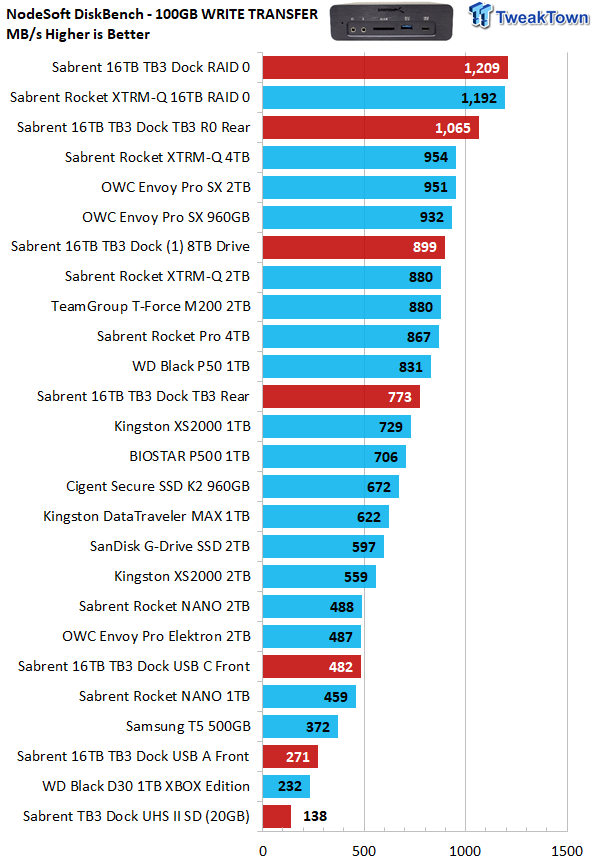 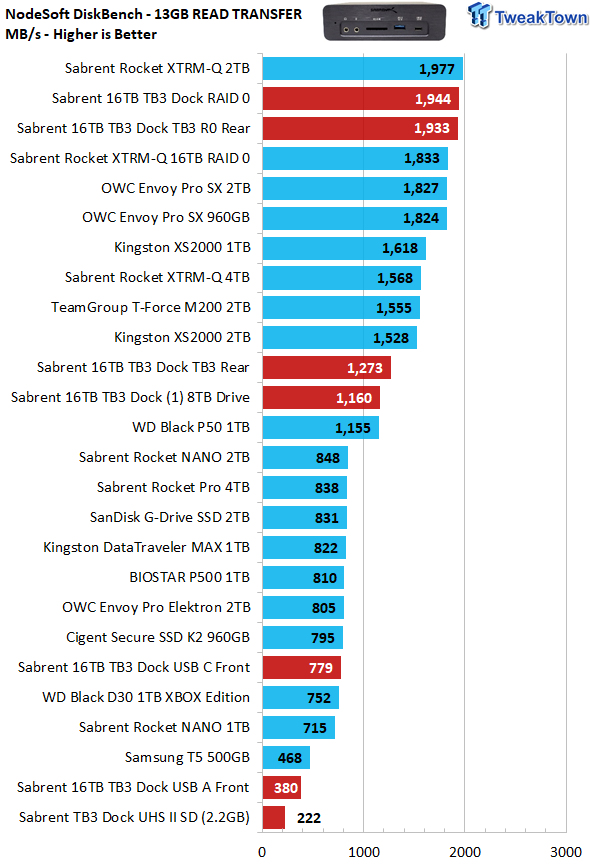 We brutalize our test subjects with our extremely hard-to-swallow 100GB data block. This data block is the same one we use for our internal SSD testing and is composed of more than 62K files. Sabrent's 16TB dock is a portable storage juggernaut, capable of delivering transfer rates equivalent to those of most internal SSDs in a desktop setting. Running in RAID 0, Sabrent's TB3 Docking Station delivers yet another lab record. Wow.

For the UHS-II slot, we switched gears to strictly video files, where we tested its transfer rates with a 20GB write test and a 2.2GB read test. Results here are limited to the SD card we used as the slot is capable of up to 270MB/s throughput. Nevertheless, impressive as we see it.

Sabrent's latest creation is a perfect example of its industry leadership as it relates to ultra-high capacity NVMe storage. But this device is so much more than just 16TB of fast portable NVMe storage. It can power your laptop, making it possible to run a monitor from your laptop at higher refresh rates and resolutions than you can get from the typical integrated HDMI output. You even get HDR if your monitor is so equipped. Then there is all the rest of the IO that connects through a single TB3 cable, including an Ethernet Port, UHS-II SD card reader, and audio jacks. Amazing.

As we see it Sabrent's unique 16TB Docking Station is the best of the best and overall, the finest example of versatile portable storage and connectivity expansion we've ever seen. It's not cheap, but we are of the opinion it's worth every penny.

One final point we should add, if you don't have 3 grand to spend, but still want in on Sabrent's Thunderbolt 3 Docking Station, it comes in other more affordable capacities of 2TB, 4TB, and 8TB. 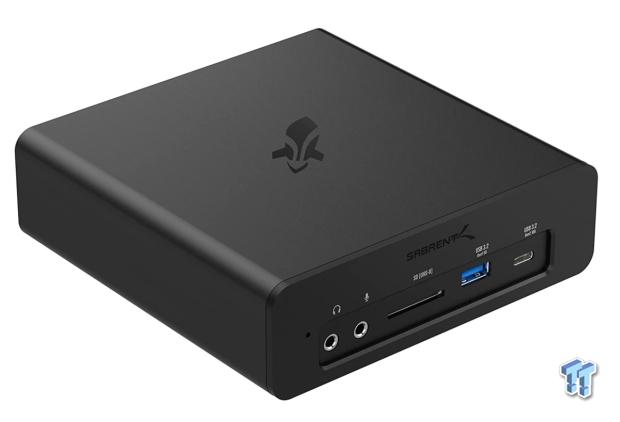 You demand the best there is? Well, here it is.