Introduction - Into the fray

What it is - Dying Light 2 is a massive, I repeat massive open-world game full of action, brutality, and grinding. It'll keep you busy for a long time. There are lots of collectibles, loot, upgrades, and tons of quests.

What it isn't - Don't expect to beat this game quickly or devote time to it casually--it demands an investment, and it can get quite tedious.

"Do not go gentle into that good night.

"Rage, rage against the dying of the light."

"He who makes a beast of himself gets rid of the pain of being a man." 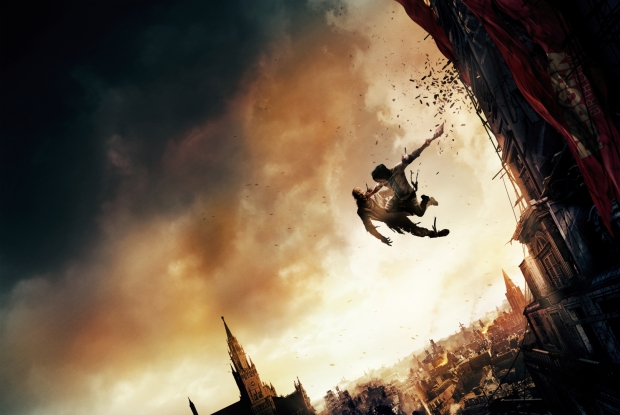 Dying Light 2 is a game that emphasizes three things: Fun, content, and symbolism.

Techland has put most of its focus on those first points. Dying Light 2 is great fun and turns you into a literal zombie-smashing superhero while arming you with plenty of toys in the process. There's a grappling hook that you can use to swing across an incredibly vertical world, a paraglider that can cut through diagonal swaths in the sky, and a galaxy of weapons that can be modified with totally chaotic effects. 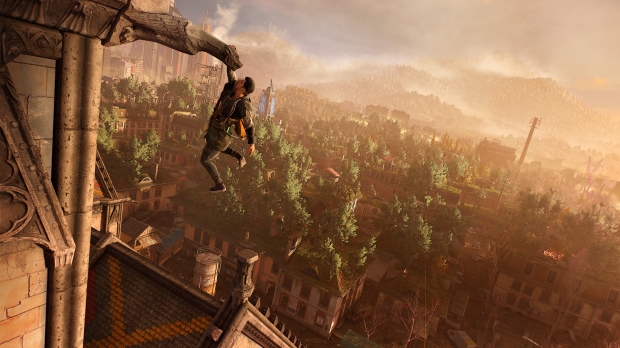 Parkour is immensely enjoyable and is the real star of gameplay. The way gamers can pretty much jump and climb across any surface in the game is pretty astounding. Techland has redefined parkour mastery with Dying Light 2.

While fun, the game does suffer from content bloat. It's a massive open-world game in terms of scope and activity, with a high volume of icons, quests, explorable locations, loot, and pretty much every systemic gameplay mechanic you can imagine. Dying Light 2 often feels like busywork because its gameplay loop is so layered; there's stamina, health, infection timers, weapon durability, all of which you must pay attention to at any given moment. 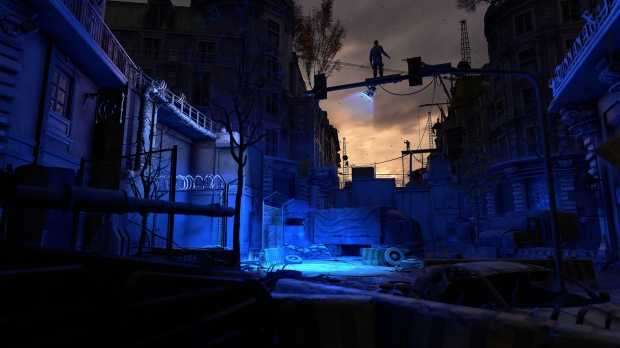 Plus, you're always trying to scavenge materials every step of the way. It can get overwhelming, and often you kind of wish the game had a free mode where you could just smash zombies and be free of responsibility.

Dying Light 2 is very symbolic if you read between the lines. This aspect is what drew me into the game, but it's often diluted with the grindy mechanics and inane quests.

Stay Human is an interesting concept that expertly illustrates the warring duality of man, the animalistic survival instinct versus compassion and empathy. There's an opportunity to explore an existential crisis centered around Samuel Johnson's immortal quote: He who makes a beast of himself gets rid of the pain of being a man.

In Dying Light 2, the main character, Aiden Caldwell, is infected with the zombie virus. At night he slowly becomes a beast. Throughout the entire game, you must fight the infection to not only stay alive but preserve your humanity. This deadly metamorphosis is temporarily reversed by entering the light, whether it be natural or artificial. 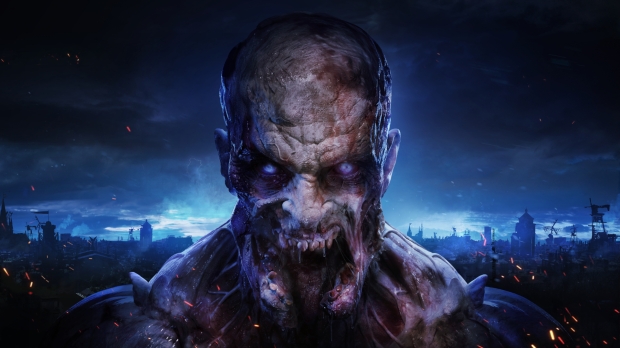 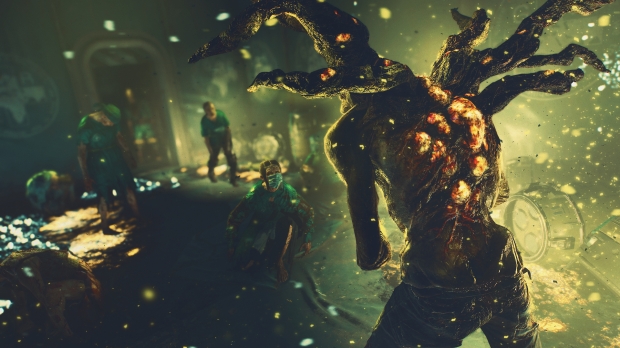 This speaks to mankind's core desire to not only enter the light to cleanse their spirits but to use it to keep the darkness at bay.

As Aiden, we are the keepers of light. Our decisions and actions determine how bright that light shines. But we are not perfect, and we're also infected by the shadow (in this case, the zombie infection).

The idea of daylight staving off evil is immensely symbolic and metaphorical, with lots of religious overtones. There's a kind of redemption that happens during the day, a stark contrast between the horrors of the dark when the true monsters roam free and the more mundane--but still dangerous--daywalkers.

The metaphors are strong here. The day zombies reflect everyday people who are only part beasts, more subdued by the light itself. At night, they are unleashed, much like a violent criminal who becomes brazen under the cloak of darkness. 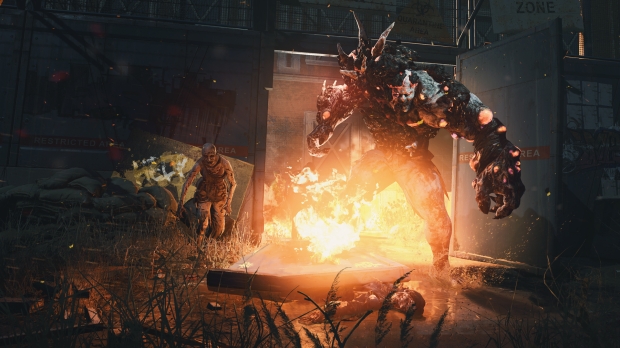 I find these concepts incredibly alluring and captivating, but the game only introduces them on a baser level. It's a kind of innate sensory experience that you can recognize without actually seeing--something natural, like feeling a cool breeze without being able to see the actual wind. I believe these concepts speak to every person on a deeper subconscious level.

Sadly, the game doesn't capitalize on this potential as much as it should. Dying Light 2 is a central story of hope against despair, of carrying a flickering flame through the shadows of the dead. It's a game where the horrors of the End Times become alive; brother against brother, the dead walk the Earth, a world-breaking plague, etc. 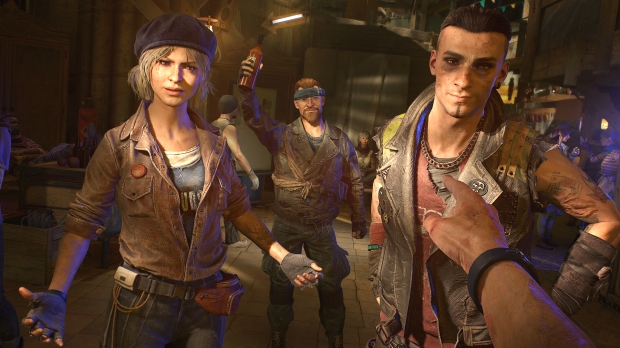 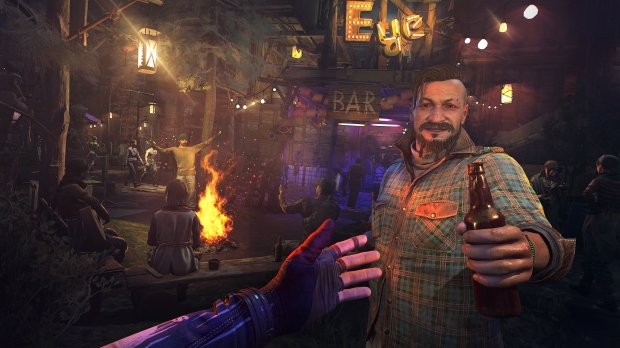 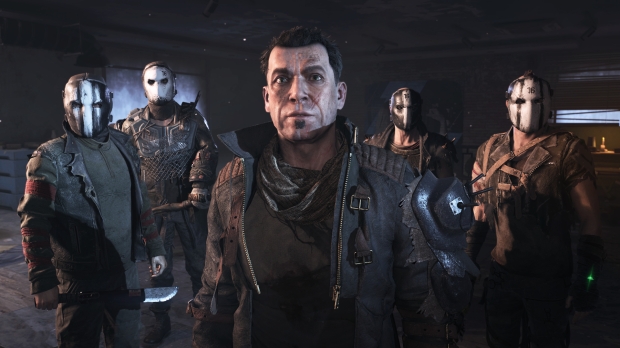 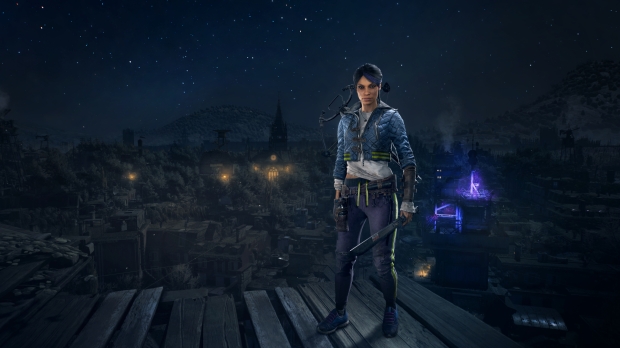 Gamers do get to make human decisions that theoretically affect NPCs and factions in specific ways, often with moral dilemma situations, but the reality is the effects aren't always apparent, and the choices aren't as powerful as I'd like to have seen.

Another point is the core message of the game, to Stay Human, is undermined by the sheer dearth of content, missions, and quests that players can wade through. It's hard to see poignancy and having moving, emotional experiences when a good portion of the quests are mundane and not meaningful. Sure, there are unique characters and questlines, but often it feels like busywork.

That's a shame because early on, I found Dying Light 2's core message scrawled crudely on a bloody church's wall: God is dead, and the only light that we have now is the light we create and share.

Villedor is the real star of Dying Light 2. The characters, scenarios, main story--everything pales in comparison to The City. The amount of environmental storytelling that Techland has packed into Villedor reminds me of Arkane's brilliant Talos I from Prey; the atmosphere is something unique out of a distorted, post-apocalyptic fantasy story.

The City conjures up a dreamy European village with cobblestone streets, unique architecture that stretches back a hundred years or more, and a kind of old-world charm that's somehow both comforting and terrifying. 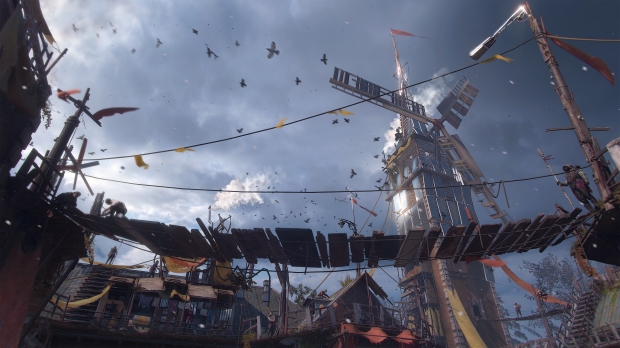 Villedor has a kind of surreal, violent cruelty attached to it. Hordes of disgusting zombies roam the city freely, chewing corpses and mutilating passersby. These shambling horrors are strewn throughout buildings and environments; there are shops, cars, and other mundane, everyday things from our real world, creating a stark contrast between Before and Now. The evidence of the Before times is all around, from the playgrounds, parks, bikes, and beautiful, sun-gleaming buildings. All of it is marred by the present-day hell-world of blood, mayhem, wanton brutality, and death.

It's an interesting duality that makes me think of how abandoned cities may have looked during the Black Plague. Villedor is a beautiful, haunted tomb of a city where the living is almost dead. 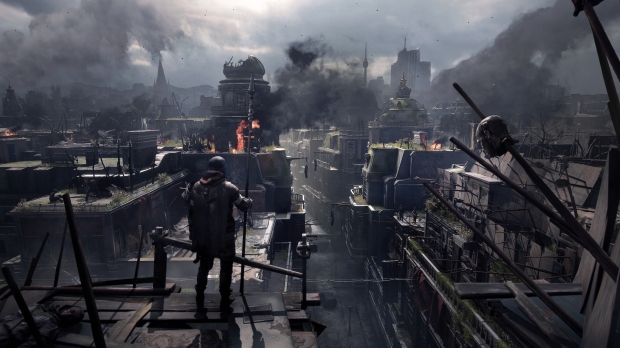 In a very real sense, Villedor heralds the New Dark Ages. This concept is something Techland billed in press materials, and it rings true. Not only does Villedor look and feel like the perfect setting for this kind of timeline, but the plague has equalized humanity and reduced their once-advanced weapons into base hack-and-slash melee brutality of the old crusade eras.

Villedor is one of the most interesting playgrounds I've seen--and make no mistake, it is a hallowed playground specifically made for you to explore. It's peppered with tons of loot and lore, but more importantly, there are many areas that tell stories without saying anything at all through their visual representations or art. There are tales of survival and death all around; Graffiti from frenetic survivors, messages of hope and despair, and the sheer resiliency of humanity represented through makeshift fortifications, faction-cities, etc.

There's a kind of Fallout-y charm throughout the game but overall Dying Light 2 is much more mature, grim, and brutal. 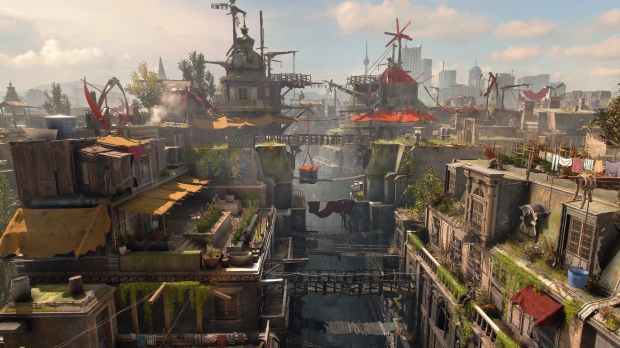 Villedor is also very symbolic. Humanity is mostly living in the upper levels of the city, on rooftops and buildings. Humans live above while the monsters roam below, a loose metaphor for heaven and hell. People have had to literally elevate themselves not only to survive but to potentially thrive, not unlike how people must rise above to conquer hardships and despair.

Throughout the game, you will literally shape and mold Villedor's layout. Who you choose to help--or hinder--will determine how their settlements look and what bonuses you get from these zones. It's a nice way to affect the environment while simultaneously getting a little gameplay boost.

Game Mechanics - Welcome to the grind

Dying Light 2 is incredibly grindy, at least at the beginning. Things do even out somewhat, but there's always some system fueling your gameplay. You could be scavenging for materials to build a new weapon or mod, craft medicine or lockpicks, or arrows for your bow. Maybe you need UV Shroomz to help stave off the infection at nighttime. Or maybe you want to smash in some zombie skulls to boost your combat efficacy and get a new skill. 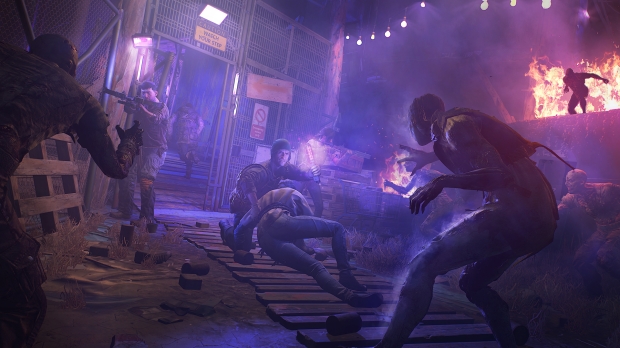 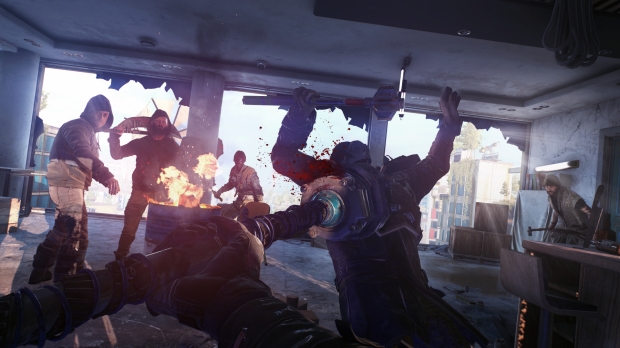 Whatever the case, Dying Light 2 is a kind of endless loop with a massive playground for you to explore, collect, and wreak havoc within.

There's a metric ton of weapons that scale with your level that have different types, including slashing blades and smashing blunt weapons, most of which can be modified with insertable mods. This allows a nice amount of customization, like popping in a spark mod to zap enemies on crit strikes or even freeze them. Just like Breath of the Wild, though, the weapons will break. Popping in a new mod will restore some of the durability, but the weapons will eventually break. 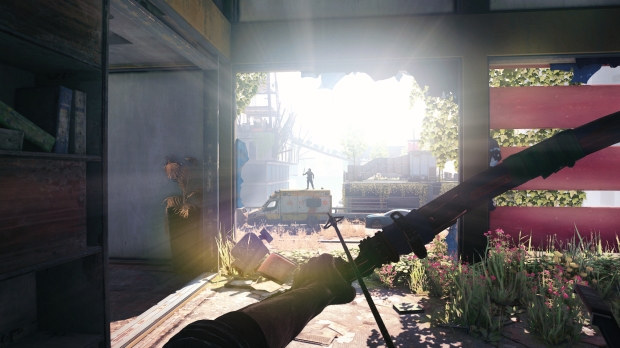 Like all of the other gameplay mechanics, weapon durability forces you to keep moving, to keep searching, and keep playing. All the systems feed into one another in an admittedly masterful way, but the game can often feel like tedious work.

That's not necessarily a bad thing, but be forewarned, Dying Light 2 takes a lot of investment, and the payoff isn't always noticeable. The real payoff isn't necessarily the story or the characters, but the endless power chase of being able to smash more and more zombies in creative and more explosive ways.

Wrap-Up - More of the same, only better

Simply put, Dying Light 2 is the definitive Techland first-person chaos simulator and is the best zombie game of its type to date. It's derivative and not exactly 100% original, but it delivers all the best things about the first game (and Dead Island) in a refreshed, upgraded package with tons of content. 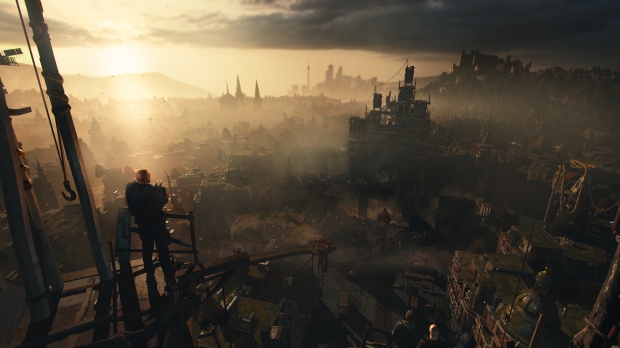 Dying Light 2 is so big that it could comfortably be the only game that you get in Spring 2022. At the same time, this massive amount of stuff to do creates a tedious gameplay loop that often feels redundant, as if the tasks, gauges, and meters are only there to artificially inflate the time investment. Techland has created one of the best core loop-driven games I've seen in a long time, and Dying Light 2 is nearly perfectly designed for a live game...only it's not billed as such.

The game does have issues with its story, dialog, and content bloat, but it is a fun, explosive experience with innovative parkour and traversal. It's also surprisingly existential and will make you think about morality.

+ Lots of weapon upgrades and customizations

- Can be pretty buggy

- Lots of grinding, mechanics can be tedious

- First-person perspective can cause some motion sickness at times

- Dialog can be frustratingly boring

Dying Light 2 has explosive combat and immensely fun parkour but it's held back by content bloat and a weak story.