DRAMless SSDs are seemingly all the rage these days. By going DRAMless, SSD retailers save on the cost of production and typically pass the savings down to the customer. Traditionally choosing a DRAMless SSD came with a rather large tradeoff in performance for a minimal cost reduction that didn't make much sense for the average consumer. Well, those days are changing. As of late, we've been getting DRAMless SSDs coming through the lab that are just as powerful as traditional SSDs with onboard DRAM but are cheaper and far more power-efficient.

With new power-efficient PCIe Gen4 x4 controllers popping up across the landscape and faster flash arraying this new generation of DRAMless NVMe SSDs, you give up little to nothing in the way of user experience (performance that matters) when you go DRAMless. All you do is save money without sacrifice. We see that as a big win for the consumer. A big part of the recipe for DRAMless success is the advancement of HMB (Host Memory Buffer) at the driver level. HMB allocates a bit of system DRAM to the SSD to speed along addressing and maintenance so the SSD can perform at a high level without the need for onboard DRAM. If you are running Windows 11, HMB functions so well it just might signal the end of DRAM on SSDs. Time will tell.

Okay, so back to our test subject for today, the MSI Spatium M450 1TB. MSI's newest SSD is powered by the very same controller found on the SSD that powers Microsoft's XBOX Series X next-gen console, the Phison E19T. Phison's E19T is a 4-channel PCIe Gen4 x4 DRAMless controller. This controller is a bit different than some of the others we've seen lately in that it doesn't produce sequential speeds exceeding those of Gen3 controlled SSDs. 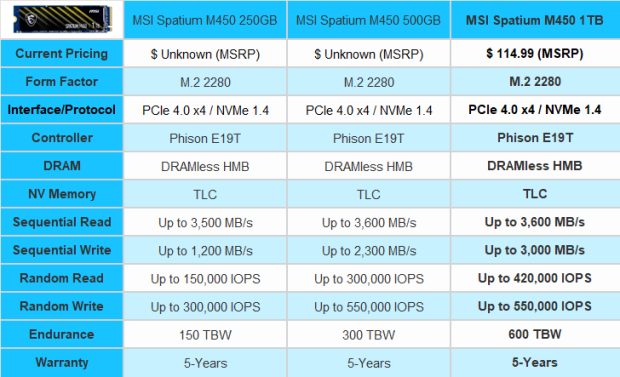 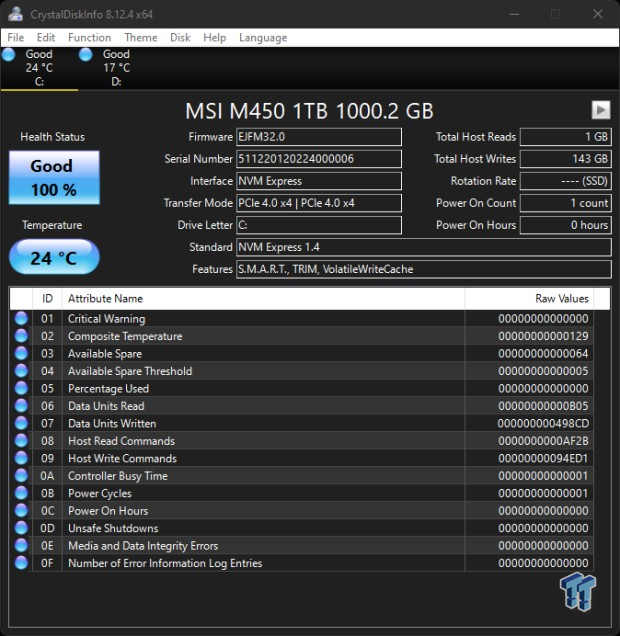 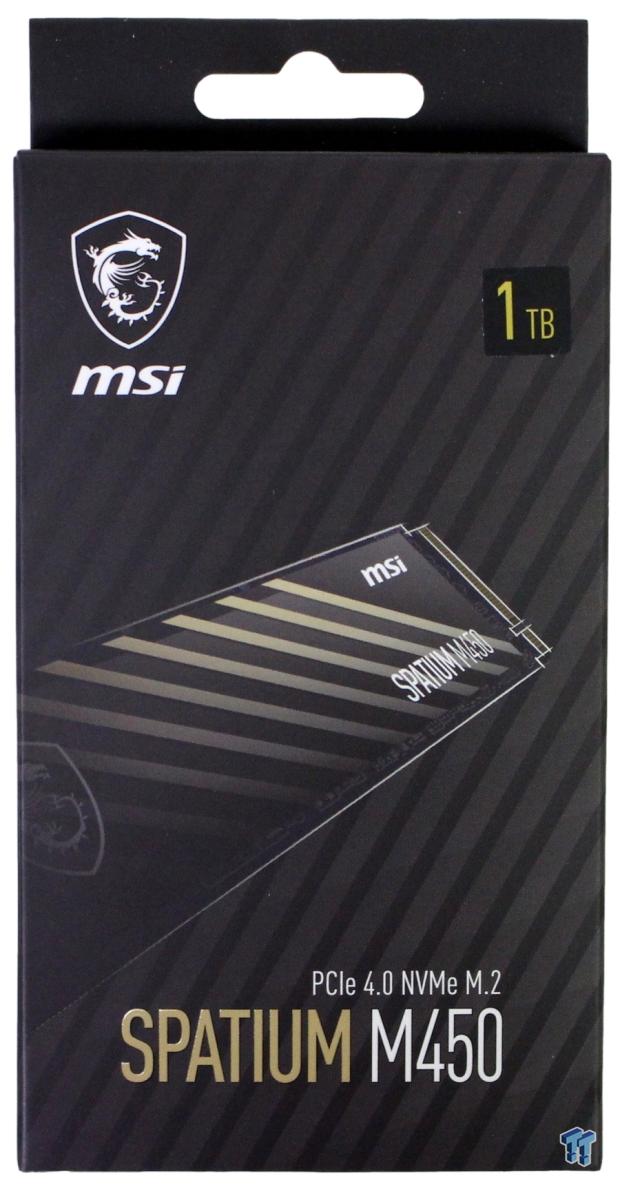 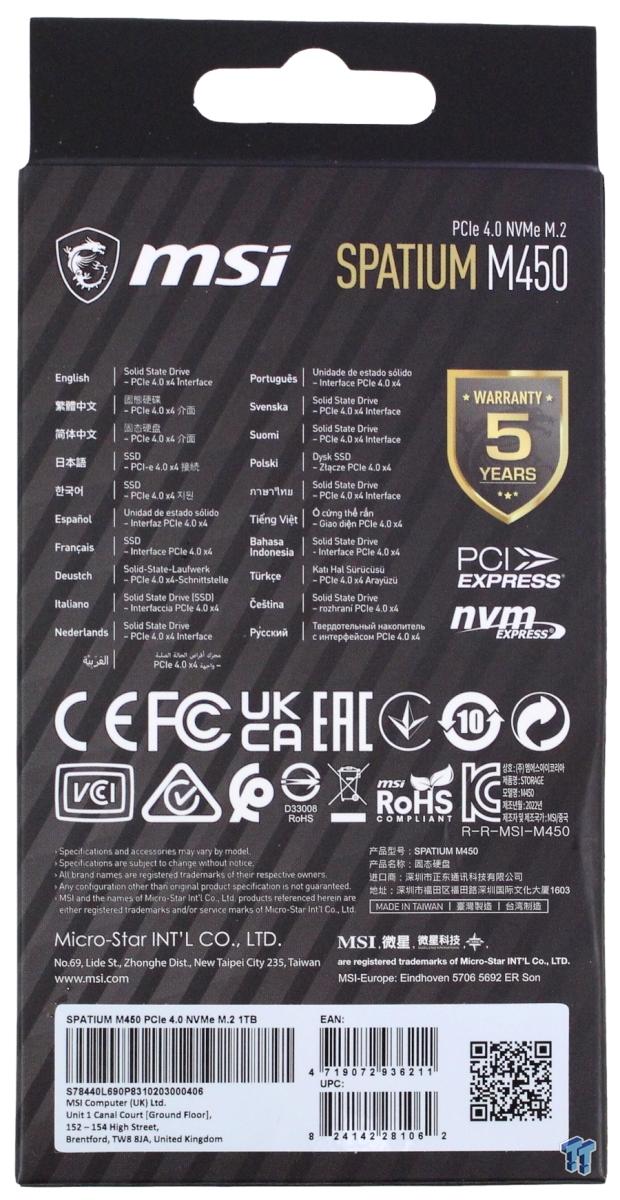 We don't know the particulars of the flash that arrays the M450, but an educated guess based on random read numbers pegs 96L Micron as the likely culprit. 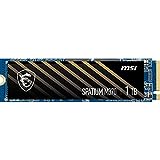 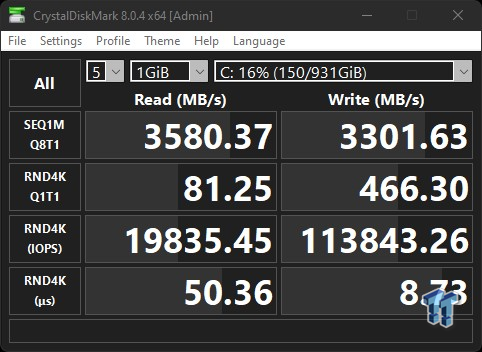 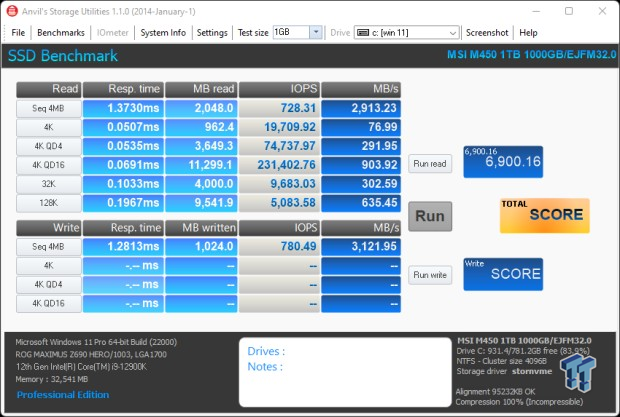 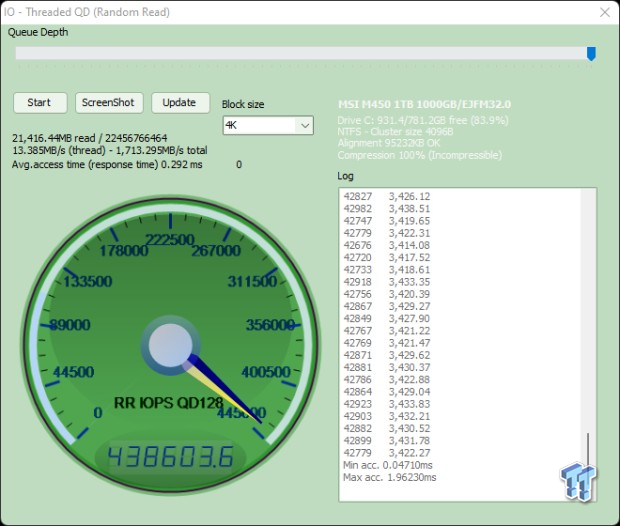 Again, random performance is fairly strong for a 4-channel DRAMless SSD. However, sequential speeds are quite limited, which greatly affects the overall score. Surprisingly, we can exceed the stated max random read IOPS, which is nice to see as this is rarely the case for any SSD. 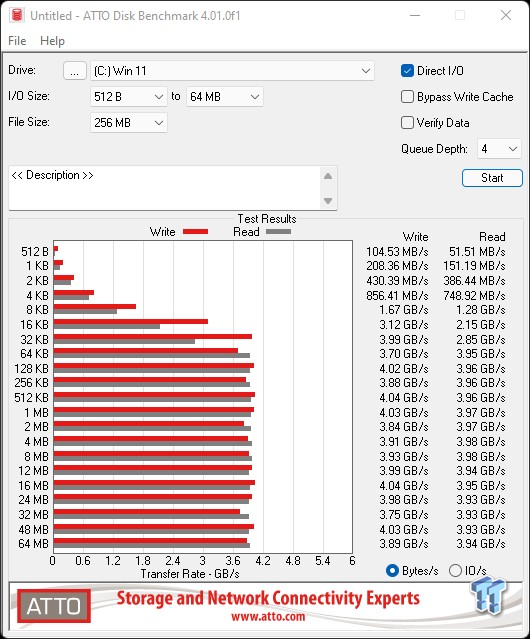 Sequential performance at 128K is where we start to see evidence that the M450 is indeed a PCIe Gen4 SSD. Throughput here is better than any PCIe Gen3 SSD can deliver and even better than some big-name Gen4 SSDs. However, keep in mind that the compressible data generated by ATTO is, for lack of a better description, skipped over by Phison's controller architecture. 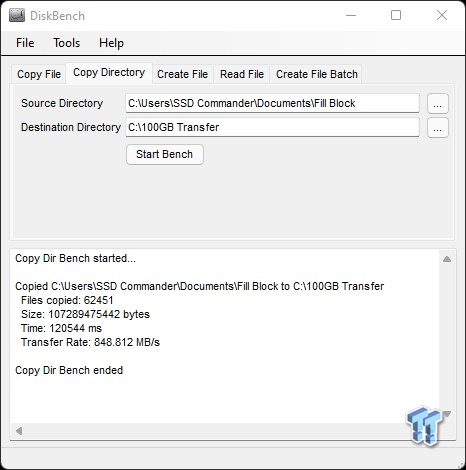 Our write transfer test consists of 100GB of a crushing mix of data composed of more than 62K files. We would like to see better numbers here to be sure, but we don't consider large, sustained writes of this nature to be a metric of much importance as they are a very rare occurrence in the consumer space. 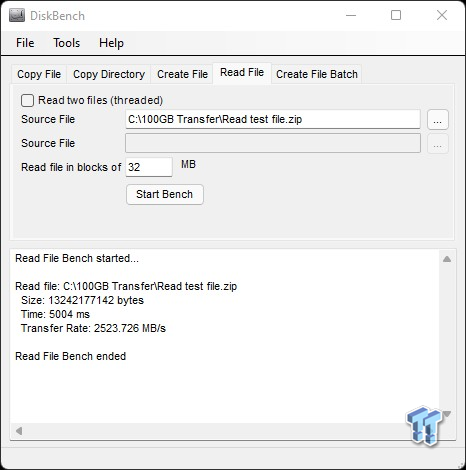 On the other hand, read transfers are indicative of how well an SSD is capable of handling common consumer workloads and gaming. The Spatium M450 1TB does pretty well here, even outdoing the powerful DRAMless Samsung 980 SSD. 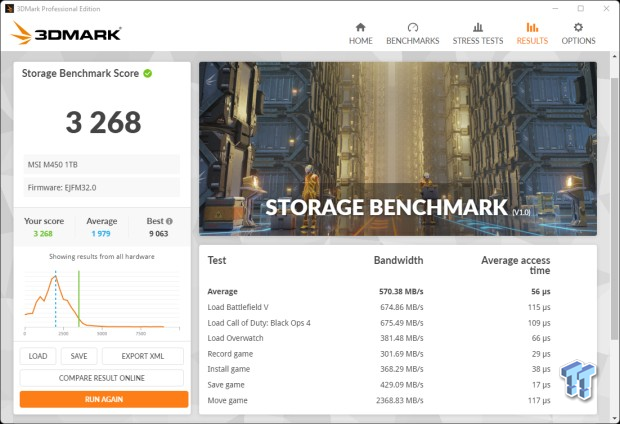 Gaming is a performance metric that matters to the majority of DIY consumers, especially to the enthusiast crowd that TweakTown caters to. All things considered, this is a decent result, even slightly better than the more powerful ATOM 50. 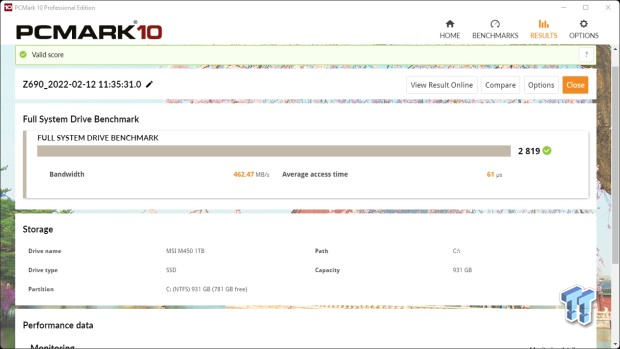 Similar performance to that of E18 SSDs arrayed with 96L flash when dealing with heavy consumer workloads. It's even beating its more powerful cousin, the Spatium M470. Hey, we will take that. Not bad at all for a DRAMless 4-channel SSD. 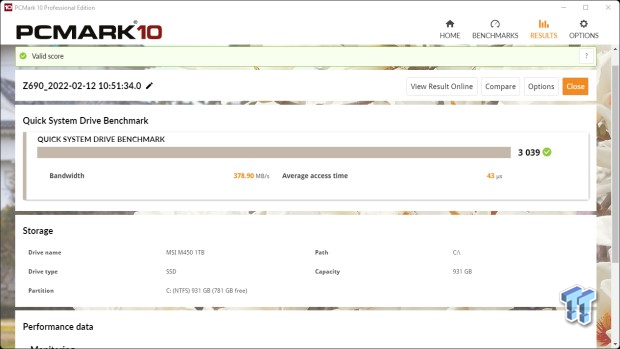 Again, the Spatium M450 slots right in there with older E18 based SSDs like the GIGABYTE AORUS 7000s. Not a bad place to be for a 4-channel DRAMless SSD.

So, what are we to make of the Spatium M450? At the beginning of our testing regimen, synthetic results pointed toward the M450 being a very low performing PCIe Gen4 x4 SSD, as results landed within the realm PCIe Gen3 x4 results. However, synthetic results are just that and not necessarily indicative of real-world performance. In the case of MSI's Spatium M450, synthetic results did not foretell what the drive is made of.

As we moved into real-world simulations, the M450 came to life, so to speak, by producing results equivalent to those of 7,000 MB/s capable Phison E18 SSDs arrayed with 96L flash. This is performance that matters, and this is where the Spatium M450 stepped up to the plate.

We rank SSDs in terms of overall user experience (performance where it matters most) as expressed by PCMark 10 storage and 3DMark gaming storage tests. We consider a user experience score of 11K or more to verify an SSD as a TweakTown Elite performer. It's pretty tough for any SSD arrayed with 96L Micron to prove itself an Elite performer, let alone a DRAMless SSD arrayed with it. 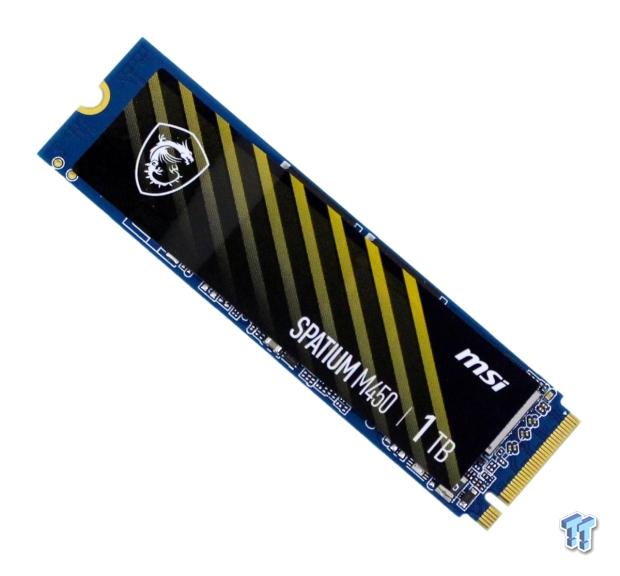 Overall, the Spatium M450 1TB presents a good value for consumers. It excels at consumer workloads, even going toe to toe with many 8-channel 7,000 MB/s capable SSDs. Even gaming performance is surprisingly good for a DRAMless SSD. We can and do recommend the Spatium M450 for most consumer use case scenarios.

Priced right, the Spatium M450 1TB is an excellent choice for most consumers.