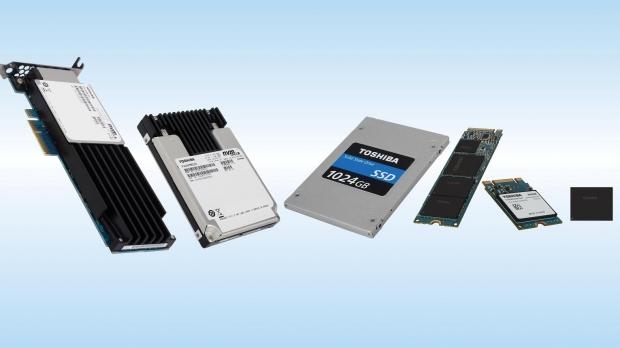 Each NVMe SSD product is engineered with a distinct Toshiba-developed controller platform and Toshiba's own state-of-the-art MLC NAND flash memory, so the technologies are well suited for optimum performance and reliability. Each SSD family is designed for its target segment with capacity, optimized form factor, and security capabilities.

SERVERS AND STORAGE APPLIANCES: The PX04P series of enterprise SSDs are designed for servers and storage appliances needing scalable power and performance settings. The PX04P series2.5-inch NVMe SSD has the industry's lowest power consumption[8]. With only 18 watts active power driving maximum performance, the PX04P's combined power plus performance bring low TCO demanded by today's enterprise data centers. The PX04P series also supports up to four lanes of PCIe 3.0, and is available in either a half-height half-length (HHHL) add-in card or a 2.5-inch form factor with SFF-8639 connector. The PX04P series eSDDs are also equipped with Toshiba's QSBC® error-correction technology.

"Toshiba leverages the performance and latency advantages of PCIe and flash memory to produce industry standard NVMe SSDs that will reach client, hyperscale/datacenter and enterprise markets. Market adoption of NVMe SSDs is going to accelerate, and Toshiba is well positioned to capitalize on this trend," said Don Jeanette, Vice President at TRENDFOCUS.

"With analysts predicting greater NVMe SSD adoption in the next year, at Toshiba, we are ensuring our customers have plenty of choices and that their needs are met by offering a broad portfolio of high performance NVMe SSD solutions, in multiple performance levels and form factors," said Cameron Brett, director of SSD product marketing at Toshiba Storage Products Business Unit.

Samples of Toshiba's newest lines of NVMe, PCIe SSDs will be available in Q4 2015. Toshiba's newest NVMe PCIe SSDs as well as the PX04S Series of enterprise 12Gbit/s SAS SSDs are on display this week at Flash Memory Summit in San Jose, Calif. in booth #407. For more information on Toshiba's portfolio of industry-leading solid state drives, hard drives and hybrid storage solutions, visit www.toshibastorage.com. To connect with Toshiba Storage, visit the corporate blog at http://storage.toshiba.com/corporateblog/ and follow @ToshibaStorage on Twitter.

[1] PCIe and PCI Express are a registered trademark of PCI-SIG Corporation.

[6] QSBC is a registered trademark of Toshiba Corporation.