The fastest, most versatile I/O in any desktop of any size, Up To 25x Faster than firewire800, Thunderbolt 2 technology in ST4-TB is phenomenally fast. The two Thunderbolt 2 ports on ST4-TB features dual 20-Gbps channels for data transfer and that's up to four times faster than USB 3. But beyond speed, Thunderbolt gives you unprecedented expansion capabilities. You can daisy-chain as many as six Thunderbolt devices to a single port. And since Thunderbolt is based on Display Port technology, Mini Display Port devices like Apple LED Cinema Display can plugs right in, too. 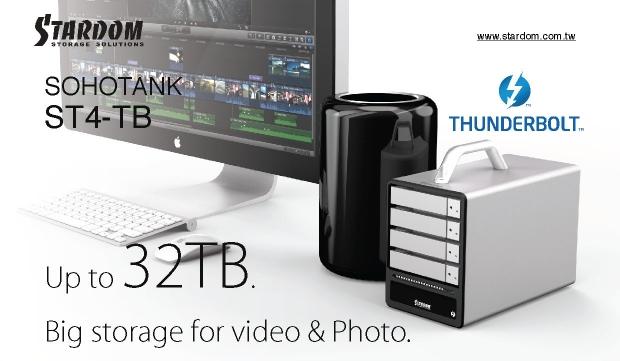 For field editing applications, the ST4-TB can be made portable as it comes with a grip handle, which you can choose to install for making creative contents mobile convenient and less bulky. With two optional storage modes, user can choose between RAID 0 and independent mode. In RAID 0 mode, the enclosed four drives will be striped and combined into one large volume for storage to enhance the data transfer speed performance. Under the Independent mode, the enclosed drives are seen as four separate volumes instead of one single volume.

The new ST4-TB is equipped with RAID 0 storage mode, which enables user to attain up to 724MB/s read speed with ST4-TB's Thunderbolt transmission interface. Whether it is used for searching and editing photo galleries, or video editing and synthesis, it promises to deliver a smooth and easy operation. 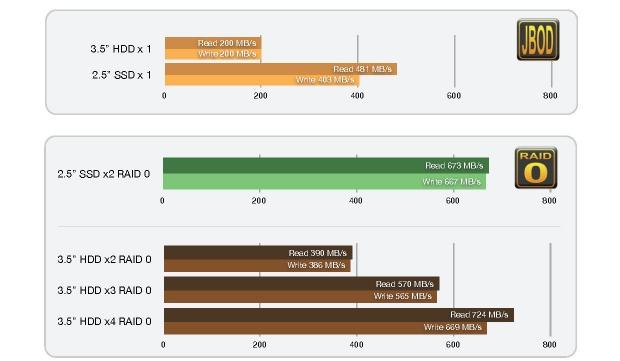