Lenovo today announced at the 2015 International Consumer Electronics Show its new lineup of YOGA convertibles and tablets with new technologies that take flexibility and interactivity to a new level. The family includes the thin and light YOGA 3 in 11-in and 14-in models (in a 13-in chassis) built especially for today's on-the-go and digitally-hungry consumers; the ThinkPad YOGA, optimized for businesses in a 12-in model, and a 14-in and 15-in model for pro-sumers with optional Intel RealSense 3D camera; and the 8-in YOGA Tablet 2 with Windows, featuring Lenovo AnyPen Technology, that turns nearly any pen into a tablet writing tool. 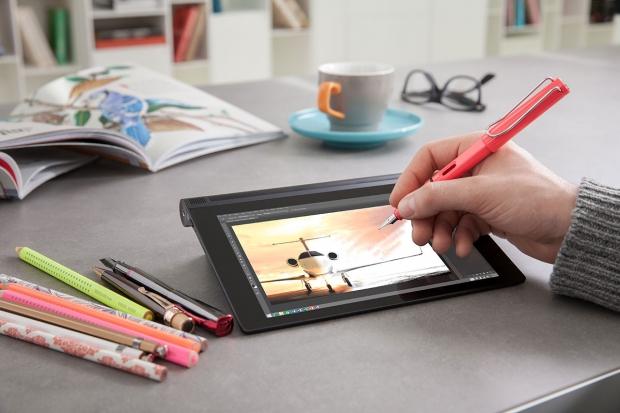 The 8-in YOGA Tablet 2 with Windows featuring AnyPen Technology extends the YOGA family tradition: the hardware not only adapts to users with its four modes, but it also provides a new, innovative writing solution that gives users a better way to interact with their device and distinguishes it from other tablets today.

As part of the YOGA Tablet 2 family announced in Fall 2014, the YOGA Tablet 2 8-in with Windows drew acclaim for its enhancements over the original YOGA Tablet. Not only does it have four unique modes unlike any other tablet on the market - Hold, Tilt, Stand and Hang - giving users more ways to do more, but it also features an unparalleled entertainment experience. Equipped with two front facing speakers, Wolfson Master Hi-Fi noise reduction and Dolby audio, this compact tablet goes large on entertainment. With Windows 8.1, its 8-in FHD display and Intel Atom processor, users can strike a great balance between work and play. And mobile consumers will appreciate its extremely long battery life of up to 15 hours.

The new YOGA 3 gives consumers even more flexibility with choices of an 11-in model or a new 14-in model with a backlit screen. Both convertibles showcase an envelope-thin design, measuring 18.3mm thin or less. In fact, the larger 14-in model gives users even more screen real estate yet remains extremely thin and light built-in a 13-in chassis. And at just 15.8mm thin and 1.1kg, the 11-in model remains the lightest convertible in the YOGA family. Both feature the classic YOGA two-hinge design allowing 360Â° flexibility to give consumers amazing function and value with four special modes - Laptop, Stand, Tent and Tablet. Lenovo refined the hinge to now open and close more smoothly and also allow the screen to lay flat at 180°. 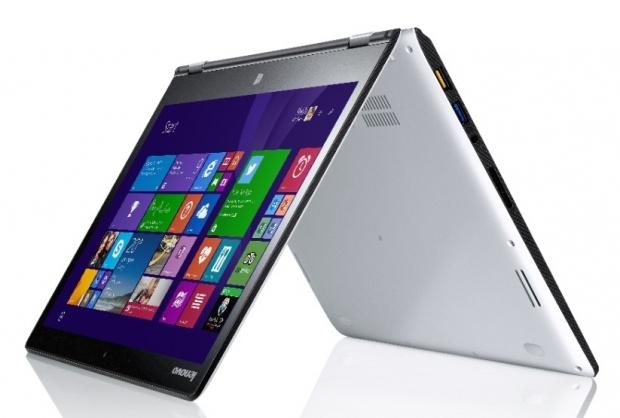 Lenovo created the new ThinkPad YOGA 12-in, 14-in and new 15-in convertibles to meet the needs of businesses and pro-sumers, striking the right balance between productivity and a great PC for personal use. Built for small office, home office and students, the ThinkPad YOGA gives users mobile flexibility featuring the new ActivePen technology in select models along with elegant design and business-optimized features including an optional Intel RealSense 3D camera on the ThinkPad YOGA 15.

Select ThinkPad YOGA models feature an optional ActivePen for convenient, accurate and precise handwriting. Ideal for productivity tasks like taking notes, sending emails or creating presentations, ActivePen closely mimicks a user's actual handwriting on paper. The YOGA 12 continues to offer a digitizer/pen option that provides an internal garage for the pen. ThinkPad is creating an innovative hardware and software pen experience, regardless of pen technology.

With four modes and all day battery life, users can digitally write or enjoy any of the ThinkPad YOGA's modes: type or write in Laptop mode, take class notes in Tablet mode, present to colleagues in Stand mode or just relax by watching a movie in Tent mode. And the convertible's Lift n' Lock keyboard makes switching between Laptop and Tablet modes trouble-free without keys getting stuck.

Thin and light at just 19mm thin and less than 1.5kg on the 12-in model, these stylish convertibles come in black with an attractive backlit keyboard as well as FHD touchscreen display.

The ThinkPad YOGA also comes ready for business with powerful up to 5th Generation Intel Core i7 processors, Windows 8.1 with optional vPro for managed environments (12-in only), large storage up to 1 TB and Dolby Home Theatre v4.

"As users' lifestyles evolve and change, so does our YOGA line of convertibles and tablets," said Dilip Bhatia, vice president worldwide marketing and design, PC Group, Lenovo. "Our latest products fuse new handwriting technologies and 3D camera technologies with the flexibility, performance and a more adaptive computing experience the YOGA family is known for. All this adds up to making the PC more and more responsive to you."

The 8-in YOGA Tablet 2 with Windows, featuring Lenovo AnyPen Technology will be available beginning in January with models starting at $299 via www.BestBuy.com and www.lenovo.com.

The ThinkPad YOGA 12-in and 15-in models will be available beginning in February starting at $999 and $1,199 via business partners.

The ThinkPad YOGA 14-in model will be available beginning in May starting at $1,199 via Best Buy.