Creative Technology Ltd today announced a product that would radically transform the wireless speaker market: the new Sound BlasterAxx AXX 200 functions as a full-fledged Sound Blaster and a portable, powerful NFC wireless speaker rolled into one. This wireless sound system - which is fully programmable - actually intelligently enhances audio in real-time, making it perfect for music, movies, calls and games. 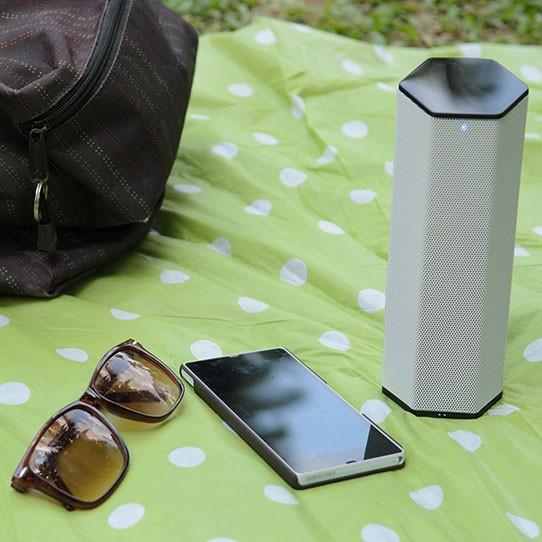 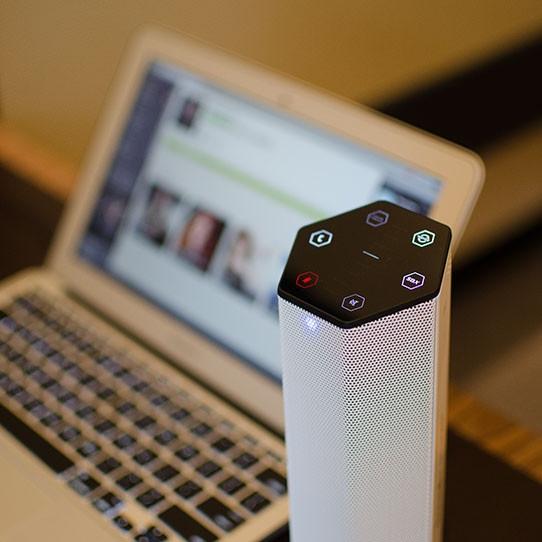 The Sound BlasterAxx AXX 200 also boasts an immense host of other useful and fun features such as a quad microphone array for teleconferencing and Voice Recording, an MP3 Player, and a 'crazy' Super Megaphone that not only amplifies the user's voice in all kinds of zany ways, but also allows the user to karaoke anywhere. The sound system also comes with an insanely loud siren, and even charges the user's smartphone. 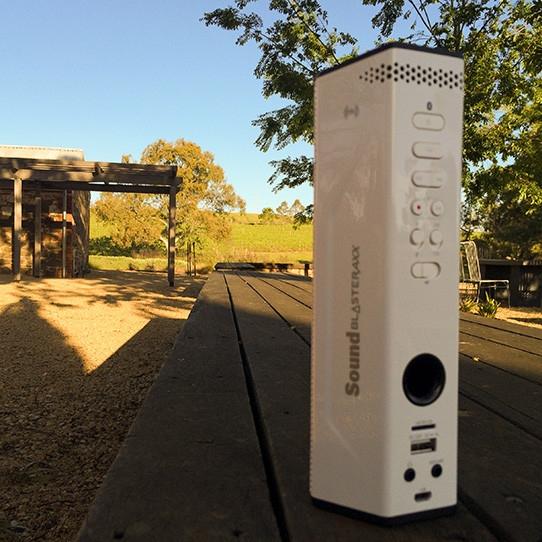 The Sound BlasterAxx AXX 200 boasts a uniquely elegant and polished vertical tower design that houses a patent-pending stacked stereo speaker system, and a built-in SB-Axx1 chip for advanced audio enhancement and customisation. This separates the Sound BlasterAxx AXX 200 from other portable wireless speakers in the market - instead of playing audio as it is, the sound system can actually enhance audio in real-time by utilising Creative's proprietary SBX Pro Studio audio technologies to deliver outstanding audio playback for music, movies and games. For example, the sound system is able to boost the clarity of dialog levels in movies with Creative's proprietary SBX Dialog Plus technology. Another great feature is SBX Smart Volume. When in Night Mode, it intelligently minimises abrupt volume changes. It can also automatically adjust and equalise the volume of different audio tracks - this helps when users have a collection of different MP3 songs.

Another key differentiating factor lies with the sound system's advanced communications capabilities, which make it the perfect personal wireless mobile teleconferencing device. The AXX 200 features a proprietary quad microphone array which works in perfect harmony with the SB-Axx1 processor to provide crystal clear 360-degree voice pickup. The advanced Sound Blaster processor also allows for various advanced proprietary CrystalVoice voice enhancement technologies not even found in high end teleconferencing systems. For example, CrystalVoice Focus allows the Sound BlasterAxx AXX 200's beamforming microphones to clearly pick up your voice within a specific acoustic zone, while suppressing all noise from outside that zone. This combination of advanced communications technologies and hardware makes the Sound BlasterAxx AXX 200 a superior personal communications device as compared to other portable wireless speakers.

The same quad microphone array and CrystalVoice technologies also work perfectly in facilitating high quality voice recording. The sound system features an Integrated Voice Recorder which allows for versatile one-touch recording of all kinds of audio - calls, external voices, streamed music, voice and music, Super Megaphone and music, and everything else the user may hear - directly to an insertable MicroSD card. This is ideal for recording voice memos, lectures, interviews, teleconferencing sessions, business/corporate meetings or even recording spontaneous sing-along sessions. It even comes with a hardware switch to mute the microphone for moments when the user needs privacy.

Beyond powerful audio processing, the AXX 200 also provides an option for the most direct and convenient audio playback - the sound system's Integrated MicroSD WMA and MP3 player lets users play enhanced audio directly from a MicroSD card, so users do not need to always commit their smartphone to play music. The player even allows users to skip music folders so that they can navigate to their songs faster without having to tediously cycle through all their individual tracks.

In keeping with its ability to produce amazingly loud sound despite its portable size, the AXX 200 also possesses an entirely unique feature - a Super Megaphone that aggressively amplifies a user's voice on-the-fly. Instant voice amplification has its practical uses - for example, for attracting attention or directing people - but it can also be used for fun, allowing users to play pranks on friends or sing out loud to their favorite songs. Users can also instantly transmute themselves into various fantastical characters by adding a whole range of voice effects (CrystalVoice FX) to their voices in real-time, for example, changing male voice to female.

High Quality Wireless Connectivity with NFC for Tap to Connect

As the perfect companion for smartphones and tablets, the AXX 200 is able to connect wirelessly via Bluetooth, and utilises the aptXand AAC codecs for the highest quality audio and lowest possible latency. The sound system also features the latest Near-Field Communication (NFC) technology, allowing users to quickly and easily connect to Bluetooth devices, requiring only a simple tap from an NFC-enabled smart device to the sound system to pair and establish a connection. Users can also connect two Bluetooth devices to the AXX 200 simultaneously.

The AXX 200 is not just a wireless speaker for smart devices. Users can connect it to their PCs or Macs via USB to enjoy clear digital audio for their desktops or laptops. But far beyond that, when connected via USB, the AXX 200 doubles up as a full-blown, high-quality Sound Blaster. The built-in multi-core SB-Axx1 processor provides hardware acceleration for SBX Pro Studio and CrystalVoice technologies, targeted at PC users. As with other Sound Blaster cards, the AXX 200 also features a dedicated auxiliary/microphone input, as well as a headphone/line output. For example, when connected to a headset, the AXX 200 utilises SBX Surround to provide stunning, realistic 3D surround sound, perfect for an immersive listening experience for music, movies and games. At the same time, it functions as a powerful speaker for computers and simultaneously, a wireless speaker for mobile device.

The AXX 200 also features a Dual Purpose Battery. The built-in high capacity 5200 mAh lithium-ion rechargeable battery is able to provide the sound system with up to 15 hours of playback time. It also serves as a battery bank that can charge a smartphone several times over.

Easy Audio Customisation and Control via Apps and PC/Mac Software

Users can look forward to full control of their audio settings. This is done on smart devices via a downloaded application called Sound Blaster Central which is available for iOS and Android devices. Audio settings are also customisable when connected to a PC/Mac via the Sound BlasterAxx Control Panel software.

The Next Wave - Fun with Audio, Anytime, Anywhere, Anyhow

"The Sound BlasterAxx AXX 200 represents the next wave in audio - having fun with audio anytime, anywhere, anyhow!" said Sim Wong Hoo, Chairman and CEO of Creative Technology Ltd. "This powerful AXX 200 is truly portable and besides possessing a full advanced suite of intelligent features, also comes with many zany and useful features that would allow users to have great fun with their audio. Here's a good example: the AXX 200 is the only speaker to incorporate a Super Megaphone. Not just any megaphone, the Super Megaphone leverages our Sound Blaster chip to enable you to change your voice, so you can amaze and amuse (and torment) your friends and be the life of the party. Sing along on the Super Megaphone while your favorite music plays; you have an instant karaoke anytime, anywhere! You can even record your karaoke session! And by popular request, I even added an insanely loud siren. The AXX 200 is a wireless speaker, a Sound Blaster, a speakerphone, an MP3 player, a voice recorder, a battery bank, a karaoke-anywhere device, a siren, a Super Megaphone - it's a one-of-a-kind wireless sound system that you can use anytime, anywhere, anyhow. It is unlike anything you have ever seen before.

But beyond all the fun, the built-in SB-Axx1 chip and other advanced technologies in the AXX 200 makes it an incredibly intelligent device. I seriously believe that this is a game-changing product - it is the start of a whole new race of intelligent wireless speakers.

With its huge range of features, all of which would collectively cost over US$1,000, we could sell the AXX 200 for US$499 and it would be a reasonable price. Instead, we initially decided to be competitive and set a standard retail price of US$299.99. But even then, why shouldn't such a game-changing device have a game-changing price? I thought, what the heck, let's make it US$149.99 for a start! With such a radically aggressive price point, we will be selling the AXX 200 online, beginning in the United States at creative.com."

Users can also purchase a separate docking base that comes with a supplied universal power adaptor. It is designed to seamlessly charge the Sound BlasterAxx AXX 200. The base removes the hassle of having to plug a cable into the AXX 200 every time it needs to be charged - instead, users can simply drop the AXX 200 onto the docking base for charging.

The Sound BlasterAxx AXX 200 wireless sound system has a suggested retail price of US$299.99 and is available online in the United States now at creative.com - at a special price of US$149.99.