How is the GHz Edition variant of the Radeon HD 7970 different? The Club 3D HD 7970 GHz Edition embodies the maturity of the 28nm process, and the scalability of the Graphics Core Next architecture. Due to both of these factors, the GHz variant raises the GPU core clockspeed from 925MHz to 1000MHz+. This card also features an extension to AMD Powertune technology called "Boost", which allows the GPU to dynamically adjust both voltage and clockspeed above the reference clock of 1GHz+. 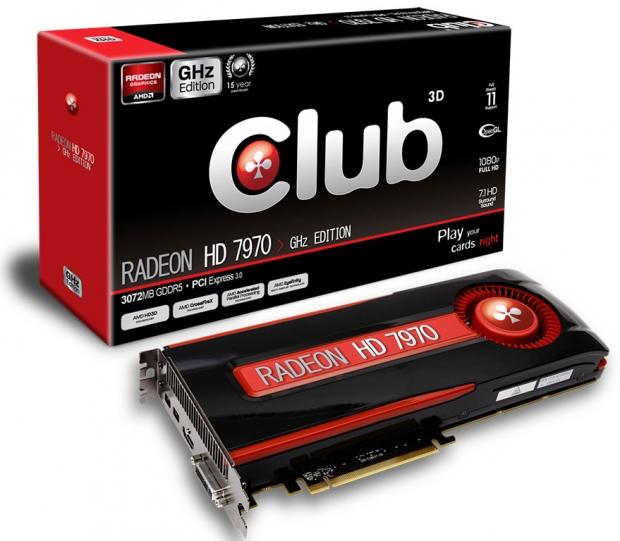 We like to say that Graphics Core Next was built for ultra settings. But it's not just hardware, as AMD has been working closely with game developer's to optimize their engine for GCN.

The GCN architecture is optimzed for ground-breaking performance in games and compute. It is up to 2.60X performance vs. competitor's fastest single GPU in compute workloads.

First and foremost, we like to call this the world's fastest and most versatile GPU. Even with ultra settings and a resolution of 2560×1600, the HD 7970 GHz Edition is the fastest single-GPU graphics card in today's most demanding titles. For example, Batman: Arkham City, The Elder Scrolls V: Skyrim and Battlefield 3 all run better on AMD Radeon.

The performance advantages are even more substantial when you switch to titles that have been optimized for Graphics Core Next, like DiRT Showdown (up to 59%), Sniper Elite V2 (up to 40%) and Nexuiz (up to 37%). Like the graphic above, all of this data was also recorded at 2560×1600 in each game's highest possible detail settings.

But Graphics Core Next isn't just for stellar gaming performance. As open compute languages like OpenCLOther applications used by millions of people every day, like WinZip®, can now leverage the tremendous compute power of Graphics Core Next, too. Compared to both processors and competing graphics cards, AMD Radeon products can free system resources and get you back to work more quickly. and C++ AMP take flight, the GCN Architecture is helping AMD to build products-like the Club 3D HD 7970 GHz Edition-that provide substantial performance to the applications you use when you're done gaming.

Take Handbrake, for example. Handbrake is a world renowned, open source video transcoding utility for Mac OS, Windows and Linux. Millions of people use this application every day to prepare videos on their PC for use on the road with smartphones or tablets. Over the past year, AMD has worked closely with the development team to introduce OpenCL acceleration into the transcoding pipeline, and the performance is exceptional.

Efficiency was a corollary goal. By transitioning to the industry's first 28nm process, we could design an architecture that not only packed more compute units into a given space, but more complicated and capable compute units. Any of our GPUs can offer more performance than analogous products from previous or competing architectures and, today, the Club 3D Radeon HD 7970 GHz Edition sets the world record for consumer GPUs by offering 4.04 TFLOPS of performance to make quick work of applications like Adobe Photoshop CS6.