Intel Corporation's biggest marketing campaign in nearly a decade kicks off this week with television commercials, online experiences and print ads that the company is hailing as "cinematic and epic."

The multi-faceted global campaign, called "A New Era of Computing," is aimed at marketing the Ultrabook experience in exciting and innovative ways to consumers. Valued at hundreds of millions of dollars, the campaign is the largest marketing spend for the company since launching Intel Centrino in 2003. 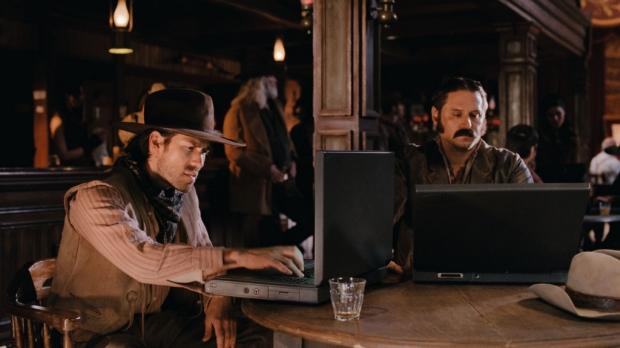 "῾A New Era of Computing' is going to be very different from what you've seen from Intel in a long time," said Kevin Sellers, vice president, Sales and Marketing Group and director, Advertising and Digital Marketing. "This is not a campaign where we're talking about the microprocessor or Intel the company. Instead, we're giving a cinematic and epic feel to how Intel-inspired Ultrabook systems are ushering in a new era of computing and making everything else seem like ancient history."

Sellers was referring to the initial TV spots set in the American Old West, ancient China and medieval times that humorously position PCs as old-fashioned and Ultrabooks being, as the campaign theme suggests, "a new era of computing." The spots were directed by Daniel Kleinman, a British TV commercial and music video director who also helmed the title sequence for several James Bond movies.

"Desperado" debuts on American television on April 6 after a world premiere through paid promotion on Twitter -- a U.S. first, according to the online social networking service - two days earlier at twitter.com/intel. A spin on the classic spaghetti western, "Desperado" takes place in a saloon where late-19th century gunslingers frustrated by the lack of performance of their clunky notebooks feel threatened by this 21st century, Ultrabook-brandishing new kid in town. The spot highlights the responsiveness and quickness of the Ultrabook.

"House of Flying Laptops," highlighting Ultrabooks' extended battery life and a nod to such stylish martial arts films as "House of Flying Daggers" and "Crouching Tiger, Hidden Dragon," begins in an ancient Chinese temple during the Ming Dynasty. Two traditionally dressed women, each wielding a bulky, power-hungry laptop, engage in an epic battle over a single available power outlet. Their attention quickly turns to a modern woman sitting at a nearby table and working on her Ultrabook.

Set inside a medieval European castle and underscoring Ultrabooks' small form factor and high performance, "Round Table" shows a team of less-than-enthused knights subjected to a slide presentation by their king who is using an outmoded computer that can't keep up. Relief comes to the frustrated monarch when a woman suddenly enters the room with a "mystical device" - an Ultrabook.

Each ad ends with a metaphoric twist as the original ancient setting transforms to a modern-day one. A voiceover at the end says, "Suddenly, everything else seems old-fashioned. Ultrabook. Inspired by Intel."

Venables Bell & Partners in San Francisco created the campaign. The agency was also responsible for Intel's successful and ongoing "Sponsors of Tomorrow" brand campaign that launched in 2009. OMD led global media planning of a campaign that includes TV, print, outdoor, online and other advertisement placements, as well as in-store and online retail campaigns.

While the debuts of the initial three commercials will be staggered through May in the United States and abroad, a unique online experience will allow consumers to interact with the spots starting in mid-April. Visitors to intel.com/ultrabook can create their own adventures through a series of decisions while becoming educated on Ultrabook's product features along the way. Interlude, an Israeli-based technology company delivering unique interactive video experiences, created this campaign element that is scheduled to launch in the United States on April 13 and in 50 countries across 26 languages by the end of April.

"We're expanding the stories of the commercials, making them more personalized, fun and sharable," Sellers said. "Nothing like this has been done on such an epic scale. We shot scenes for the interactive experience as we were making the commercials in Spain and China to ensure that what you see on TV and online will be beautifully interwoven."

The interactive element also will expose the creative to countries outside where the TV spots will run, a working list that currently includes Australia, Brazil, China, Germany, India, Russia, the United Kingdom and the United States.

Print ads that debut on April 23 in initial markets poke fun at how futuristic the Ultrabook is. One line reads, "Your great-grandkids just called. They want their computer back." Another reads, "So futuristic it'll even feel futuristic in the future." Out-of-home billboards that debut on April 23 also use humor to illustrate the speed and lightweight nature of the Ultrabook with such copy as "Mastodons. Dodos. Bulky laptops." Retail campaigns encompass a range of executions, from merchandising materials and in-store demos to online ads and training for retail salespeople.