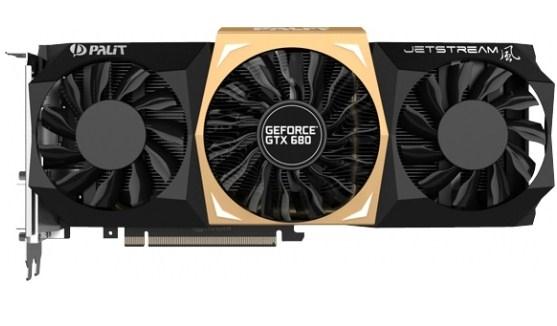 The factory overclocked Palit GeForce GTX 680 Jetstream is at boost clock 1150 MHz that is +92 MHz than the standard speed and 2GB GDDR5 memory clock is set at 6300 MHz (+292 MHz higher). Equipped with the Jetstream cooler and optimized product design, Palit GeForce GTX680 Jetstream performs 12.5% higher at 3DMark11 Xscore and average 10% higher among all hot gaming titles.

A Triple Fan design offers triple the cooling performance, and combined with the 8CM-9CM-8CM Smart Fans, heat is effectively drawn away from hot spots.

Inspired by the power of jet engines, the TurboFan Blade is designed to improve cooling performance by generating a powerful air stream and air pressure.

DrMOS, originally only available for high-end server CPUs, is now available in all its glory in the next generation of Palit graphics cards. DrMOS offers high current circuits, low noise operation, and effective reduction of heat generation.

Next generation streaming multiprocessor built from the ground up for incredible performance and power efficiency.

With a single GeForce GTX680 you can expand your PC games across three displays in full stereoscopic 3D for the ultimate "inside the game "experience . NVIDIA Surround also supports triple screen gaming with non-3D Vision monitors. Add in a fourth accessory display to get access to your email, web , or other applications while you game.

Support for new temporal anti-aliasing technique that delivers the ultimate combination of image quality and performance.

Dynamically enables vertical sync based on your current frame rates for the smoothest gaming experience.

Designed for the new PCI Express 3.0 bus architecture offering the highest data transfer speeds for the most bandwidth-hungry games and 3D applications, while maintaining backwards compatibility with existing PCI Express motherboards for the broadest support.