REDMOND, Wash. - Dec. 4, 2011 - A revolution is happening in the living room. Xbox 360 is transforming how you enjoy TV entertainment and is giving you the power to control it with your voice. The next generation of TV entertainment begins with the announcement by Microsoft Corp. of the launch of an all-new Xbox 360 experience including the first group of new, custom applications from world leading TV and entertainment content providers on Xbox LIVE.

"A new era in entertainment begins where all your entertainment is together in one place - your games, movies, TV shows, music and sports," said Don Mattrick, president of the Interactive Entertainment Business at Microsoft. "With this update, Xbox 360 system owners will experience Kinect voice control integrated with Bing search, making your TV and entertainment experiences more social and personal than ever." 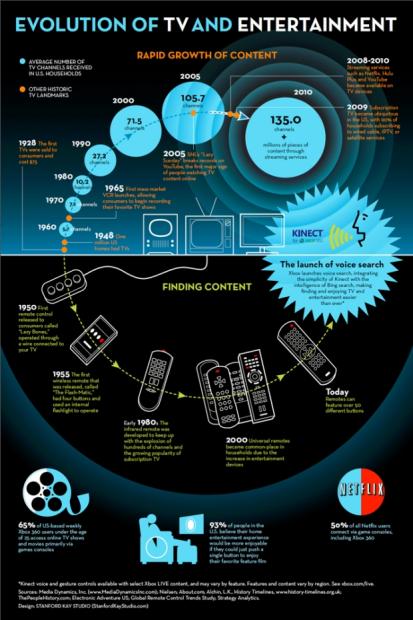 The Evolution of Television and Entertainment

A look at the rapid growth of television content, from the birth of television to current day. The infographic also depicts the evolution of how we find content on TV, from the first remote control in 1960 to finding content on Xbox 360 using voice recognition powered by Kinect and Bing.

"Microsoft has just built and delivered it: A single box that ties together all the content you want, made easily accessible through a universal, natural, voice-directed search. This is now the benchmark against which all other living room initiatives should be compared," said James McQuivey of Forrester Research in "Engaged TV: Xbox 360 Leads The Way To A New Video Product Experience,"* Sunday, Dec. 4. "...with more than 57 million people worldwide already sitting on a box that's about to be upgraded for free, Microsoft has not only built the right experience, it has ensured that it will spread quickly and with devastating effect."

You Say It, Xbox Finds It

How long does it take you to search and find your favorite movie or TV show? Do you find yourself searching hundreds of channels and multiple services and TV inputs? What if the entertainment you craved was simple, discoverable and exactly what you wanted at that particular moment?

Now, finding your favorite entertainment is easier than ever. Last year, Kinect for Xbox 360 revolutionized controller-free entertainment by letting you use your body and voice to play your favorite games and entertainment, turning you into the controller. The power of Kinect combined with the intelligence of Bing search is turning your voice into the ultimate remote control. With Bing on Xbox, you can use your voice to effortlessly find the games, movies, TV shows and music you want and discover the best offerings on Xbox LIVE, by simply saying what you're searching for. You say it, Xbox finds it. Beginning tomorrow and over the coming weeks, Bing on Xbox voice search will initially be available in English in the U.S., Canada and the U.K. for Zune video, Xbox LIVE Marketplace and select content partners. For those who do not have a Kinect for Xbox 360, text search will be available in Xbox LIVE markets.

All Your Entertainment, All in One Box

This holiday, in addition to offering the best blockbuster and Kinect games, Xbox 360 consoles are set to deliver live and on-demand TV shows, movies, videos, sports, music and news, becoming the best device to experience all your entertainment. TV and movie fans can instantly stream their favorite episodes of current television shows all season long, as well as past favorites and new-release movies.

Xbox 360 is building on its expansive catalog of movies, sports, television and music available through Hulu Plus, Last.fm, Netflix, Zune music and video and ESPN®, as well as on its existing lineup of great TV providers, such as AT&T U-verse® TV in the U.S., TELUS in Canada, BSkyB in the U.K., CANAL+ in France, Vodafone Portugal, VimpelCom in Russia and FOXTEL in Australia, by also now rolling out the following new entertainment partners and apps**:

In October, nearly 40 leading TV and entertainment providers around the world announced they would bring customized, voice-controlled experiences to Xbox 360 systems. Today, MLB Advanced Media (MLBAM), the interactive media and Internet company of Major League Baseball, and VUDU became the latest leading entertainment providers to announce they are bringing their experiences to Xbox 360 consoles. MLB.TV subscribers will be able to access every regular season game, live and on-demand, in HD picture quality with an array of interactive functionalities. VUDU offers more than 45,000 blockbusters, Hollywood classics, independent films and TV shows, including the largest library of HD content available anywhere, with the highest quality streaming and Dolby Digital Plus 5.1 and 7.1 surround sound. With VUDU, movies are available the same day they are released on DVD and Blu-ray. More information is available at http://www.VUDU.com.

Xbox 360 is a premier home entertainment and video game system. Thanks to the addition of Kinect, Xbox 360 has transformed social gaming and entertainment with a whole new way to play - no controller required. Xbox 360 is also home to the best and broadest games as well as one of the world's largest on-demand libraries of music, standard- and high-definition movies, TV shows and digital games, all in one place. The entertainment center of the living room, Xbox 360 blends unbeatable content with a leading social entertainment network of more than 35 million Xbox LIVE members to create a limitless entertainment experience that can be shared at home or across the globe. More information about Xbox 360 can be found online at http://www.xbox.com.

Xbox LIVE is the online entertainment service for your Xbox 360, connecting you to an ever-expanding world of games, movies, TV, music, sports and social entertainment. Xbox LIVE lets you play the best games, enjoy one of the world's largest on-demand libraries on any console, listen to millions of songs and share the fun with friends around the world. Xbox LIVE is also the exclusive home of controller-free online entertainment through Kinect, making your Xbox 360 more intuitive and interactive than ever before. With an active community of more than 35 million people across 35 countries, Xbox LIVE, together with Xbox 360, provides you with instant access to the entertainment you want, shared with the people you care about, wherever you are. More information about Xbox LIVE can be found online at http://www.xbox.com/live.