- Income before taxes was Euro 31 million

- Smartphones account for more than 80 percent of total sales 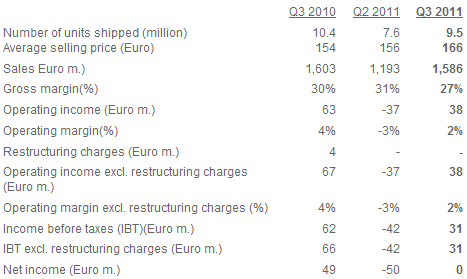 Bert Nordberg, President and CEO of Sony Ericsson commented, "We delivered a solid 73 million Euro improvement in income before taxes as we rebounded from the previous quarter with a 33 percent increase in sales. Android-based Xperia smartphone sales now account for more than 80 percent of sales and we have shipped 22 million Xperia smartphones to date. We will continue to invest in the smartphone market, shifting the entire portfolio to smartphones during 2012."

Units shipped during the quarter were 9.5 million, a 9% decrease year-on-year due to a decline in feature phone shipments, partially offset by an increase in smartphone shipments. The 25% quarter-on-quarter increase was due to the higher volume of smartphones shipped.

Sales for the quarter were approximately Euro 1.6 billion and essentially flat year-on-year.

Sony Ericsson estimates that its share of the global Android-based smartphone market during the quarter was approximately 12% in volume and 11% in value.

Sony Ericsson maintains its forecast for modest industry growth in total units in the global handset market for 2011.

Sony Ericsson celebrates its 10th year as a joint venture between Sony Corporation and Ericsson in October 2011. Over the years Sony Ericsson has brought together the best communication technologies with superior entertainment user experiences to create its Xperia line of the 'most entertaining smartphones' in the mobile handset industry. With its global corporate functions in London, Sony Ericsson has sales and marketing operations in all major regions of the world, as well as manufacturing operations in China, and product development sites in China, Japan, Sweden and Silicon Valley, California. For more information, please visit: www.sonyericsson.com/press.