LOS ANGELES - June 6, 2011 - What if you could find your favorite games, music, movies and TV shows, just with the sound of your voice? What if you could ask your TV to find "Harry Potter and the Deathly Hallows," and it did - instantly? What if you wanted to listen to Coldplay and all you had to do was tell your TV and it responded by playing the Coldplay songs you love? Only on Xbox 360 is your entertainment together in one place - and now you will be able to find it with your voice. 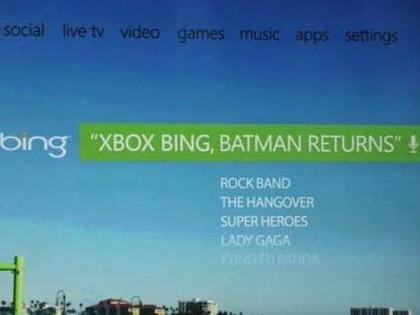 "This is an incredible time of growth and innovation for our business leveraging technologies that see us, hear us and connect us all together," said Don Mattrick, president of the Interactive Entertainment Business at Microsoft. "This year by bringing together the power of Kinect for Xbox 360 and the intelligence of Bing, we are transforming how people enjoy entertainment."

Over the past two years, Microsoft has joined with some of the world's largest TV operators to bring live television to Xbox LIVE in the United Kingdom with Sky TV, in France with Canal+ and in Australia with FOXTEL. Now, Microsoft has announced its commitment to expand access to live television programming on Xbox 360 to more providers in the United States and around the world during the upcoming year. Consumers will enjoy news, sports and their favorite local channels, all just a voice command away, on Xbox 360. Also this year, Microsoft is teaming up with Ultimate Fighting Championship (UFC)* to bring the depth of the world's best mixed martial arts programming to Xbox LIVE. Featuring live matches, classic fights, interviews and exclusive behind-the-scenes looks into the lives of the world's greatest fighters, access the octagon in an all-new interactive way only through Xbox 360.

As well as adding more entertainment with UFC, Microsoft is building on its expansive catalog of tens of thousands of movies and TV shows available on demand from Hulu Plus, Netflix and Zune by bringing YouTube** to Xbox 360. You will gain access to great "Web original" content from around the world - the latest videos, gaming tips and a universe of compelling content. And for the first time ever, you can control YouTube videos just by using your voice. A great way to experience YouTube is now on Xbox 360.

Did you miss "The Social Network" in the theater? You will be able to simply tell your television what you want to watch and choose from the multiple sources on Xbox 360 that may be offering it live or on demand. Want to play the latest viral videos from YouTube from the comfort of your couch? Xbox 360 and the magic of Kinect make it as easy as using your voice. Xbox 360 brings together the entertainment you want, whether it's movies, TV shows, music, sports, or your favorite games, available instantly with the command of your voice through Bing on Xbox 360 and Kinect.

Xbox 360 is a premier home entertainment and video game system. Thanks to the addition of Kinect, Xbox 360 has also transformed social gaming and entertainment with a whole new way to play - no controller required. Xbox 360 is also home to the best and broadest games as well as the largest on-demand library of music, standard- and high-definition movies, TV shows and digital games, all in one place. The entertainment center of the living room, Xbox 360 blends unbeatable content with a leading social entertainment network of nearly 35 million Xbox LIVE members to create a limitless entertainment experience that can be shared at home or across the globe. More information about Xbox 360 can be found online at http://www.xbox.com.

Xbox LIVE is the online entertainment service for your Xbox 360, connecting you to an ever-expanding world of games, movies, TV, music, sports and social entertainment. Xbox LIVE lets you play the best games, enjoy the largest on-demand library on any console, listen to millions of songs and share the fun with friends around the world. Xbox LIVE is also the exclusive home of controller-free online entertainment through Kinect, making your Xbox 360 more intuitive and interactive than ever before. With an active community of nearly 35 million people across 35 countries, Xbox LIVE, together with Xbox 360, provides you with instant access to the entertainment you want, shared with the people you care about, wherever you are. More information about Xbox LIVE can be found online at http://www.xbox.com/live.