March 1, 2011, Taipei, Taiwan - At CeBIT 2011, ASRock Inc. is going to showcase its latest home entertainment line as well as its premium motherboard series. People are demanding multimedia systems with more functions but smaller possible space. That is why ASRock continuously develops innovative mini HTPC products. This year, the main products that will be showcased at CeBIT 2011 are the Vision 3D, CoreHT and ION 3D HTPC Series. 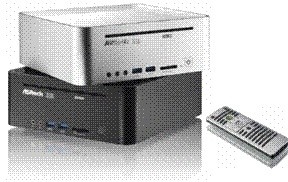 Moreover, there will be a modern living scenario setting with ASRock Vision 3D 2nd HTPC series in ASRock booth. We will also demo the latest gaming and movie programs. Just quickly join ASRock CeBIT exhibition, and users will exactly understand why home theater entertainment can be so fantastic!

ASRock is going to launch a new HTPC series named CoreHT which is designed to provide users a chance of experiencing extraordinary media center. The Intel Sandy Bridge processor allows this platform to support Intel HD Graphics 3000 and Built-in Visuals. With the support of Blu-ray Stereoscopic 3D playback via HDMI v1.4a output, users are ensured to watch the true-to-life 3D movies completely. In addition, a built-in Intel Centrino Advanced-N 6250 WLAN allows ASRock CoreHT HTPC series to support Intel Wireless Display 2.1. So that users are ensured to enjoy all of their personal and online content on a big screen with a simple wireless connection. To experience the latest Intel WiDi technology, ASRock will prepare a live demo to show how a convenient digital life could be.

Few people want their home to be dominated by their desktop computer, but the ASRock ION 3D HTPC series take streamlined simplicity to a new level. It offers users a complete high-performance HTPC in a gorgeous, small, all-in-one design. Loaded with features, like a built-in Intel Atom Dual-Core D525 processor, DTS Connector, plenty of ports such as HDMI 1.4a, Dual-Link DVI support and all essentials built into one slim unit - like wireless networking 802.11b/g/n, BD Combo and SuperSpeed USB 3.0 technology. To make this machine more unique, the ASRock ION 3D HTPC series are specially equipped with Intel ICH8M chipset that allows NVIDIA GT 218 Graphics GPU core running at PCI-E x4!

Meet all the latest gear of 2011 as ASRock showcase their talents at their CeBIT booth Hall 17, Stand D35. We welcome you to test all products at ASRock booth!