After having swept through the global market with the dominating N460GTX Hawk, world-renowned graphics card and mainboard manufacturer MSI announces the next-generation Hawk series, the R6870 Hawk graphics card. Equipped with the advanced Twin Frozr III thermal design, the all new R6870 Hawk is the world's first graphics card to use propeller blade technology. When compared to traditional fans, the air flow is increased by 20%, allowing the GPU temperature to be up to 21 degrees lower. Furthermore, it uses the 8+2 phase PWM design to provide the GPU with 2 times the power supply, along with triple overvoltage functions that allow further evolution of R6870 Hawk's overclocking capability. The R6870 Hawk has the most perfect performance blend of cooling, power components, stability, and high performance found on a graphics card today. 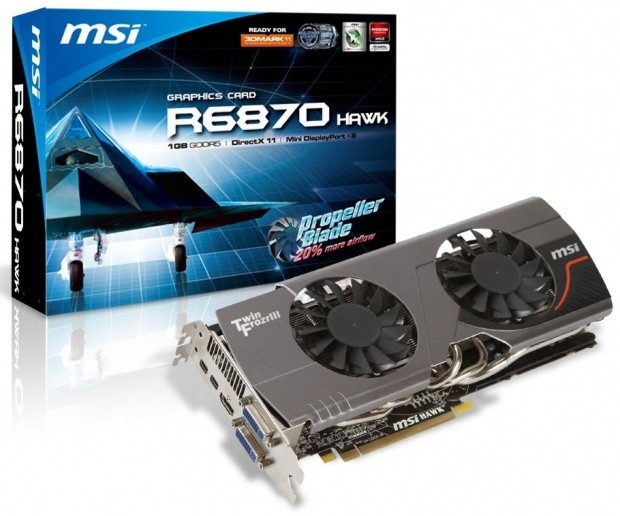 The R6870 Hawk is equipped with the advanced version of Twin Frozr III cooling design with the MSI-exclusive propeller blade technology. When compared with traditional fan blade design, it not only increases the air flow by 20%, but the grooved surface on the fan blade further extends the range of air flow, removing more heat generated by the graphics card's materials and parts. Additionally, dual 8cm PWM fans, SuperPipe technology and a nickel-plated copper base allow the heat to be removed quickly and effectively. When compared to the reference design, the GPU temperature is decreased by up to 21 degrees, completely validating the excellent cooling effects of the next-generation Twin Frozr III thermal design.

Considering the diversity of graphic card users, MSI has developed the exclusive P/S Switch function for users to adjust fan speed between the Performance Mode and Silent Mode. The former emphasizes an enhanced cooling power that can significantly reduce GPU temperature to keep the graphic card at the optimal working condition, while the latter stresses on quiet operations for users to keep noise minimal while playing games or watching a movie. As both modes deliver excellent cooling performance, even the pickiest power users can always keep the environment under control according to their needs.

Besides the unique power and voltage design, through V-Check Points users can easily use a multi-meter and monitor the GPU/Memory/VDDCI voltage status. Overclocking is also made easy and simple on the R6870 Hawk by using the Afterburner overclocking software to monitor all aspects of graphics card performance, as well as save up to 5 user-defined overclocking profiles.

MSI's R6870 Hawk graphics card uses the newest Military Class Components such as Hi-C CAP, Super Ferrite Choke (SFC), and all-solid capacitors to enhance the overclocking headroom under high-load conditions. Hi-C CAPs have a lifespan 8 times that of traditional solid capacitors, increasing GPU stability and lifespan of the graphics card, while SFCs improves efficiency by 10% while increasing the maximum current output by 30%.