Nvidia's long-rumored super chip GTX460 finally hit the market during the peak season of the traditional technology industry at the end of the year, and has created a buying spree. In light of GTX460's easy over-clocking property, the professional video card brand Lantic insisted on developing the best product; finally, with their own patented copyright designs, the GTX460 1GB GDDR5 Liberty Wings hits the market. 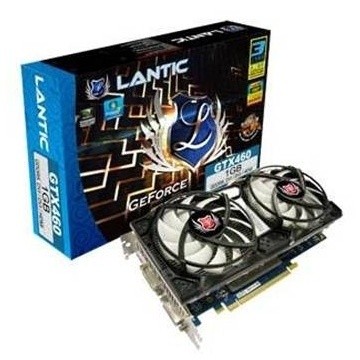 Lantic GTX 460 Liberty Wings uses the 40nm manufacturing process, with 352 built-in CUDA stream processors, supports the DX11 functions, 3D vision and high definition resolutions, and is the first to release a 256-bit 1GB GDDR5 specification. The core/memory frequency easily reaches 765MHz/3700MHz, the performance is much higher than reference cards, and it even surpasses the GTX465, which almost as good as the GTX 470. 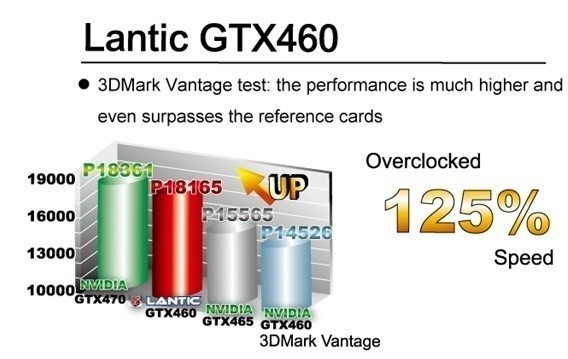 Lantic GTX460 1GB GDDR5 Liberty Wings uses the AC silent double fan which is from a popular cooling system manufacturer in Switzerland. It uses 9cm big fan blades, which can produce big and stable airstreams, plus a 4 copper heat pipe design, which vastly increases the cooling effects. Liberty Wings is also equipped with the PWM temperature control chip. The cooling system can adjust the fan's rotation speed automatically according to the surrounding temperature and has the effects of both cooling and silence. 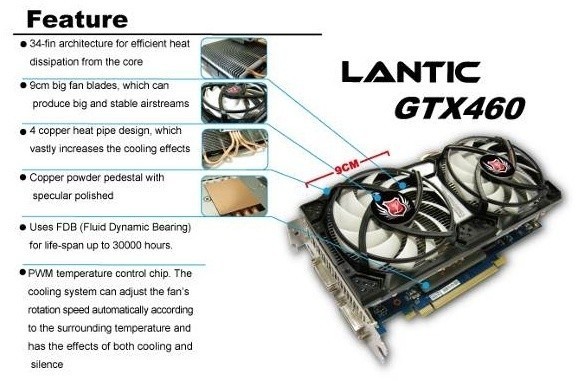 Lantic again displays their unique professionalism in the video card industry, and won't let go of any of the product's segment; they try to provide a more perfect choice for consumers.