This disc media product conforms to the new BDXL format specification that extends the storage capacity of Blu-ray Discs to 100GB, twice the 50GB storage capacity of existing dual-layer discs. This new format enables recording approximately 12 hours of terrestrial digital TV broadcasts or approximately 8.6 hours of BS digital TV broadcasts. It expands the range of applications for Blu-ray Discs to include recording and saving long-duration HDTV programs or multiple episodes of serial dramas onto a single disc with the same high-definition image quality as the original. 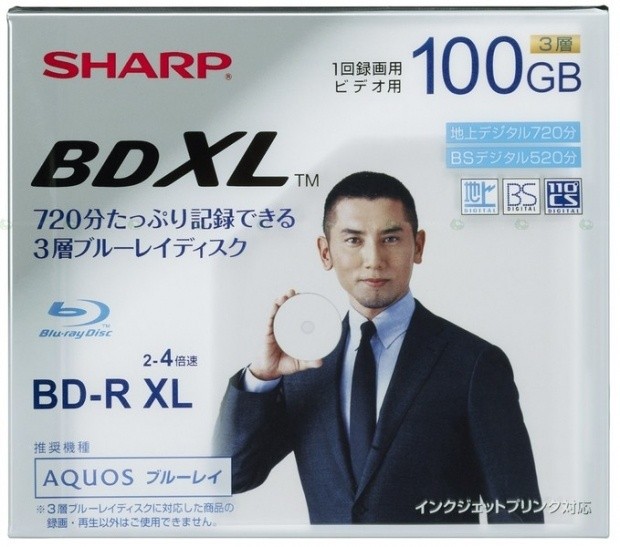 This disc media is the first in the world to conform to the new BDXL(TM) format specification that extends the storage capacity of Blu-ray Discs by increasing the number of recording layers. The dual-layer structure used up to now has been augmented with an additional layer where image data can be recorded to create a new triple-layer structure. This design doubles the recording storage capacity (to 100GB) compared to existing duallayer discs (50GB). This makes it possible to record approximately 12 hours of terrestrial digital TV broadcasts or approximately 8.6 hours of BS digital TV broadcasts in DR mode (recorded with the image quality exactly as broadcast), or store other long-duration video content, all on a single disc, while preserving the same high-definition image quality of the original.

A "hard coat" process applied to the disc surface forms a protective barrier coating to protect stored data from scratches and dirt that may cause read and write errors.

3. Users can print directly on discs down to 24 mm inner diameter.

Wide print area of 24 mm inner diameter and 118 mm outer diameter for disc labeling. In addition to enabling vivid color labeling to be printed over nearly the entire disc, oilbased or water-based marker pens can be used to hand-write labels on these discs.