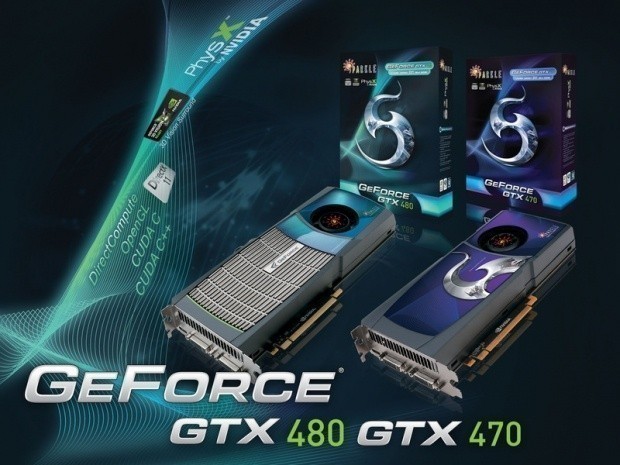 The SPARKLE GeForce GTX 480/470 Graphics Cards adopt the GF100 architecture which implements all DirectX 11 hardware features, including Tessellation and DirectCompute, among others. GF100 brings forward a vastly improved compute architecture designed specifically to support next generation gaming effects such as raytracing, order-independent transparency, and fluid simulations.

Game performance and image quality receive a tremendous boost, and GF100 enables film-like
geometric realism for game characters and objects. Geometric realism is central to the GF100 architectural enhancements for graphics. In addition, PhysX simulations are much faster, and developers can utilize GPU computing features in games most effectively with GF100.

High Performance In Tessellation Brings Film-like Geometric Realism
While Tessellation has mostly been used in films. With the introduction of DirectX 11 and NVIDIA's GF100, developers will be able to harness these powerful techniques for gaming applications, gamers will fully immerse in the film-like geometric realism brought by these DirectX 11 titles, such as Dirt 2, Stalker:OCP, Alien VS. Predator, Metro 2033 and so on.

Ray Tracing Support: The Future Of Gaming
The SPARKLE GeForce GTX 480/470 Graphics Cards brings interactive ray tracing to the consumer market for the first time, providing a glimpse into the future of visual realism in games. By tracing the path of light through a 3D scene, ray tracing uses the power of the GF100 GPUs to create spectacular, photo-realistic visuals. GF100's compute architecture was built specifically with ray tracing in mind. GF100 is the first GPU to support recursion in hardware, enabling efficient ray tracing and a host of other graphics algorithms.GF100 excels not just at standard ray tracing, but also at advanced global illumination algorithms such as path tracing, which uses a much larger number of rays to collect ambient lighting information from the scene. To sustain performance, a game may use ray tracing selectively. This hybrid model of rendering enables fast performance with great image quality. Thanks to the innovative unified cache architecture in GF100, ray tracing on the SPARKLE GeForce GTX 480/470 Graphics Cards runs up to 4 times faster than prior generation GPUs.

2~3X PhysX Performance over GTX285
Helped with the GF100 compute architecture, the SPARKLE GeForce GTX 480/470 Graphics Cards are designed to take NVIDIA PhysX technology to the next level-making games more lifelike than ever before with advanced effects such as turbulence and fluid dynamics. The new NVIDIA GigaThread hardware scheduler allows 10 times faster switching between graphics and physics processing, enabling more complex effects to be rendered in real time. The overall PhysX performance is 2-3 times faster on previous GeForce GTX 285 graphics card.

Total Immersive With NVIDIA 3D Vision Surround Technology
Prepare to be blown away by the most immersive PC gaming experience imaginable. Leveraging the power of multiple GF100 GPUs in an NVIDIA SLI configuration, NVIDIA 3D Vision Surround enables a new level of eye-popping 3D stereo gaming, expanding your real estate across 3 panels for the ultimate "inside the game" feeling. The SPARKLE GeForce GTX 480/470 Graphics Cards provide the incredible graphics horsepower to run your game in 3D stereo, across 3 panels, at HD resolutions up to 5760x1080.

NVIDIA CUDA Technology With 512 cores CUDA C/C++ Support
CUDA technology unlocks the power of the GF00's 512 processor cores to accelerate the most demanding system tasks such as video transcoding delivering up to 7x performance over traditional CPUs.