The Revolution of Digital Storage, 4x faster than the High Speed CF card 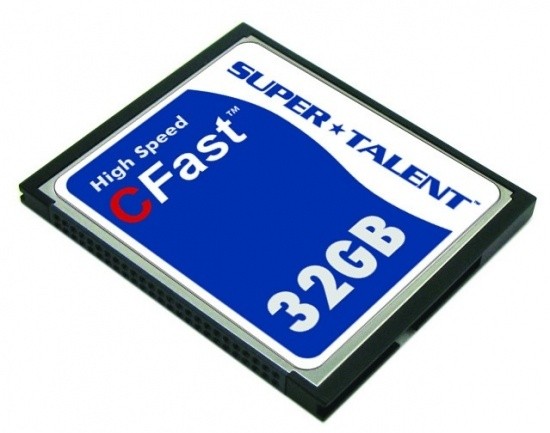 Super Talent CFast storage card is an evolution of the traditional CompactFlashTM card which has been in the industry for over 14 years, satisfying storage needs for mobile digital devices such as PDAs, digital cameras, etc. CFast has a bandwidth of 375MB/s which is four times more than the fastest High Speed 600x (90MB/s) CompactFlash card while still keeping the small original CF mechanical form factor. The new CFast storage card breaks the speed bottleneck between the SSD and the device by using a SATA interface. Super Talent has clocked these CFast cards at up to 200MB/sec read speeds. With Super a Talent CFast storage card installed, there will be no waiting time for the camera to catch up, and it will be much swifter to view pictures on a camera or to copy them to computer.

Measuring 36.4 x 42.8 x 3.3mm for Type I CFast storage cards and 36.4 x 42.8 x 5.0mm for Type II, the same physical dimensions as the CompactFlash card, the CFast Storage Card has a single-chip controller and flash memory module. The SATA interface consists of a 7-pin signal connector and a 17-pin power and control connector. The card operates at 3.3V.

Super Talent Technology Corporation based in San Jose, California, designs and manufactures a full range of DDR, DDR2, and DDR3 memory modules and Flash based storage devices for computers and consumer electronics. An ISO 9001 certified company, Super Talent utilizes its state-of-the-art factories and leading-edge components to produce award winning products with outstanding reliability. Super Talent is an active member of the JEDEC and ONFI standards bodies. With over 250 patents, the company was ranked 38th in the 2008 Wall Street Journal's Patent ScorecardTM for the IT industry.