HELSINKI, FINLAND - OCTOBER 26, 2009 - Futuremark® Games Studio today announced that Shattered Horizon™, their multiplayer first-person shooter for the PC, will be released on Wednesday 4 November, 2009. The game will be available as a digital download from Steam, or direct from the Shattered Horizon website at the suggested retail price of €19.95 / $19.95 / £14.95. Gamers who pre-order get a 10 percent discount and will be invited to help test new level packs before they become available to everyone else. http://www.shatteredhorizon.com/buynow

Shattered Horizon is a multiplayer first person shooter that immerses you in the cold reality of combat in space. Teams of players fight in zero gravity to control hollowed-out asteroids, huge fragments of Moon rock and the ruined remains of the International Space Station.

Shattered Horizon is exclusive to the PC and is also one of the first games to require a DirectX 10 graphics card running under Windows Vista or the recently released Windows 7. 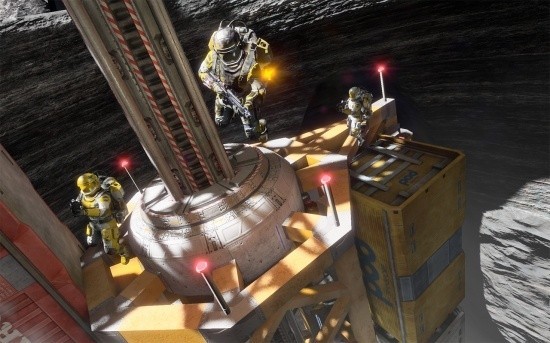 Gamers who pre-order Shattered Horizon not only get a 10 percent discount but will also be able to play and test new level packs before they become available to everyone else.

Antti Summala, lead designer at Futuremark Games Studio explained, "During our beta many game features, and even one whole level, were added as a direct result of beta tester feedback. The process worked so well that we have decided to continue it after launch. Gamers who pre-order Shattered Horizon will join an elite group who will get early access to help test and refine new levels to be released in future content updates."

Futuremark Games Studio has confirmed that Shattered Horizon will be supported after launch with new levels and features being added to the game through downloadable content packs. These expansions will be free to all players.

Shattered Horizon allows PC gamers to choose who and how they want to play through dedicated servers run by the community. Futuremark Games Studio will host dedicated servers for North America, Europe and Australia and New Zealand at launch with the server code being made available to everyone shortly afterwards.

• Experience intense zero gravity combat and complete freedom of movement in this multiplayer first-person shooter set in near-Earth space 40 years from now.
• Use your rocket pack to fly freely through space and then land on any surface. Engage enemies in furious firefights, or ambush them from unexpected angles.
• Join your friends in action-packed 32 player battles fighting to control hollowed-out asteroids, huge fragments of Moon rock and the ruined remains of the International Space Station.
• Familiar and intuitive FPS controls let you take full advantage of the zero gravity environments while astonishing graphics and advanced lighting effects immerse you in the cold reality of combat in space.
• Coming November 4, 2009 exclusively for the PC at the suggested retail price of €19.95 / $19.95 / £14.95

Shattered Horizon requires DirectX 10 on Windows Vista or Windows 7. There is no support for Windows XP or DirectX 9. Full requirements:
http://www.shatteredhorizon.com/support/

Pre-order now and save 10 percent:
http://www.shatteredhorizon.com/buynow

Futuremark® Games Studio, wholly owned by Futuremark® Corporation, was formed in January 2008 to create original games with new and entertaining gameplay. Shattered Horizon™ is the studio's first self-published game. Shattered Horizon is rated Teen by the ESRB. The game carries the NVIDIA®: The Way It's Meant To Be Played™ seal.
Futuremark is based in Helsinki, Finland and maintains a sales office in Saratoga, California. For more information, please visit http://www.futuremark.com

© 2009 Futuremark® Corporation. Shattered Horizon™ and Futuremark® Games Studio trademarks and logos, Futuremark character names and distinctive likenesses, are the exclusive property of Futuremark Corporation. The names of other companies and products mentioned herein may be the trademarks of their respective owners.