Today Novarama published the official development roadmap for the co-op action RPG Killsquad, coming to Steam Early Access on July 16th. The roadmap outlines new features and content to be added to the game in the next six months. 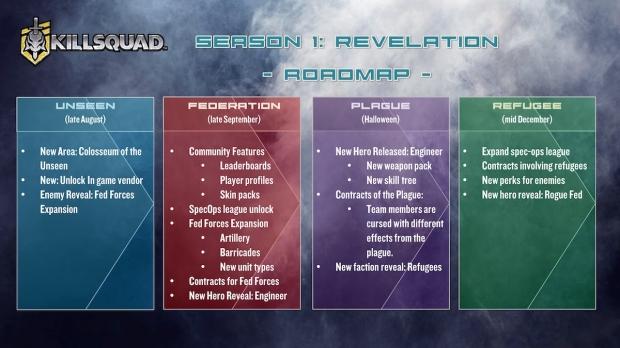 July 16th will mark the start of Season 1, fittingly called REVELATION. The focus of Season 1 will be on shedding more light on the whole Killsquad universe through four major content updates. This season will last until 2020 and will encompass new game areas, factions, enemies, a brand new hero, loads of contracts and many more content additions that will shape Killsquad into a truly rich action RPG leading up to its full release on PC and consoles in 2020.

Killsquad is a new action RPG set in a sci-fi world coming to Steam Early Access on July 16th. It is a modern RPG about bounty hunters raiding planets for loot and glory while battling enemies and huge bosses. Built on Unreal, Killsquad is an indie AAA game that focuses on fast hack'n'slash gameplay, cooperation and survival. Killsquad also has plans to launch on console for PlayStation 4 and Xbox One in 2020. Stay tuned for details coming later this year. For more information, be sure to check out the game's Official Steam page.