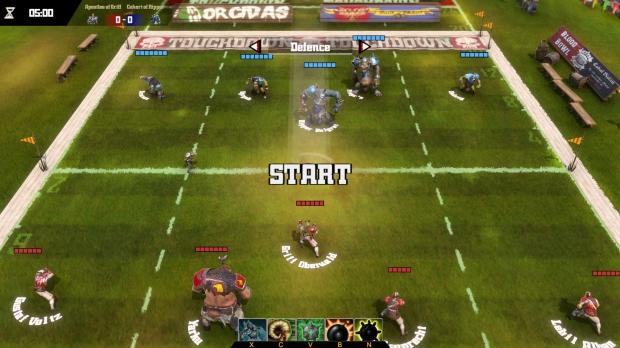 Blood Bowl: Death Zone is a fast-paced game of football and violence, based on Games Workshop's cult board game. Two opponents each take control of a 4-player team and battle it out in real-time matches that last for five minutes.

All the Old World races are allowed to play: Orcs, Dwarfs, High Elves, Chaos, Undead, Lizardmen and even Humans. Contrary to other, mundane, sports Blood Bowl: Death Zone means more than just passing and running with the (wandering squig) ball; it also includes punching opponents in the face and blasting them with a variety of spells.

During the 11 month Early Access phase, Cyanide was able to update and improve the game thanks to feedback from the community: new teams, new skills, a single player campaign as well as many key changes to gameplay were added.

To celebrate its official release, the game is available at a 50% discount for a limited period.

Cyanide is a video game studio based in Paris and created in 2000. The studio is best known for its sports game such as Pro Cycling Manager series and its console version, Tour de France. Cyanide also boasts games drawn from a wide variety of universes including Blood BowlÃƒÆ',Ãƒ,Ã,Â® (sport/fantasy/ 2009), the video game adaptation of Games Workshop's famous board game, Game of Thrones (RPG/2012), Styx: Master of Shadows (Infiltration/2014) and its sequel Styx: Shards of Darkness as well as the Videogame adaptation of H. P. Lovecraft's famously twisted universe; Call of Cthulhu - the official video game. www.cyanide-studio.com