Amsterdam, The Netherlands, June 4, 2019 - TomTom (TOM2) today released the results of the TomTom Traffic Index, a report detailing the traffic situation in 403 cities in 56 countries around the world. Mumbai takes the top spot this year with drivers in the Indian city expecting to spend an average of 65% extra travel time stuck in traffic. Next in the global rankings are Colombian capital, Bogota (63%), Lima in Peru (58%), New Delhi in India (58%) and Russian Capital, Moscow (56%), making up the top five most congested cities in the world. 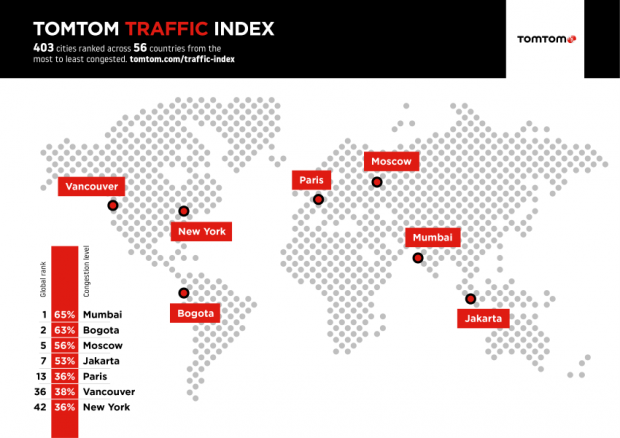 Traffic congestion has increased globally during the last decade, and nearly 75% of the cities TomTom includes in the new Traffic Index report had increased or stable congestion levels between 2017 and 2018, with only 90 cities showing measurable decreases.

There are significant differences between continents: for example, decreases were measured in Asia, with a large decrease in congestion (-8%) in Jakarta, while nearly every city in South America posted increases, the largest (8%) taking place in Lima, Peru.

Hope on the horizon

Ralf-Peter Schafer, TomTom's VP of Traffic information, said: "Globally, traffic congestion is rising. And that's both good, and bad, news. It's good because it indicates a strong global economy, but the flip side is drivers wasting time sitting in traffic, not to mention the huge environmental impact."

TomTom has been collecting traffic information and providing traffic services for nearly a decade, allowing drivers to make smarter choices in route planning and avoiding congestion. And the location technology specialist's work on the future of driving - from high definition maps for autonomous vehicles, to efficient electric vehicle routing and charging - means that car makers, technology companies, road authorities and governments already have the tools to make the roads less congested.

Schafer continues: "At TomTom, we're working towards a future where vehicles are electric, shared and autonomous so that our future really is free of congestion and emissions. We have the technology to make this future happen - but it takes a collaborative effort. From road authorities, to governments; car makers to car drivers, we all have a part to play."

People can find out more about the TomTom Traffic Index, and discover where their home city ranks at http://www.tomtom.com/traffic-index. There's also helpful advice on beating traffic congestion. The Traffic Index website has been revamped so it is easier than ever to explore city statistics and insights - as well as real-time, live traffic information.