Unravel the mysteries of the Multi-Eggverse and discover the powers of some of Marvel Studios' mightiest super heroes from Avengers: Endgame, in theaters April 26... 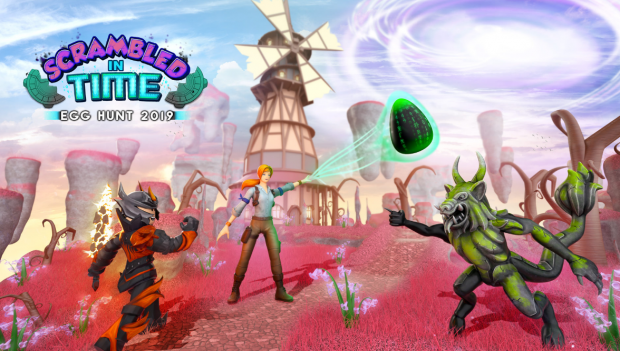 When reality itself cracks open, who can put it together again?

Fifty-eight legendary eggs have been scattered across the Roblox universe. It will take a brave and clever hero to journey through the dimensions and gather the eggs together, reuniting space and time!

But if you want to save all of egg-sistence, you'll need more than just wits and courage. That's why we're partnering with Marvel Studios to bring you all-new eggs and abilities inspired by some of their mightiest super heroes in Avengers: Endgame. As you make their awesome powers your own, you'll earn the right to unlock the ultimate virtual grand prize: The Infinity Gauntlet! The clock runs out on May 6th. With over forty different games to search, can you find all the eggs in Time...in time?

The Egg Hunt 2019: Scrambled in Time hub world was developed by Eggtually and is available on all platforms in several languages: English, French, German, Chinese (Simplified), Chinese (Traditional), Korean, Spanish, Portuguese, and Japanese! Each egg unlocks an egg-sclusive reward to keep after the hunt is over, so don't delay! Time, more than ever, is of the essence...

When you're not hunting for eggs, assemble your crew and get ready for the most epic battle in the MCU when The Avengers take on Thanos in Marvel Studios' Avengers: Endgame, in theaters April 26!https://blog.roblox.com/2019/04/egg-hunt-2019-marvel-studios-avengers-endgame