BRISTOL, UK (18 April, 2019) - Ndemic Creations has some exciting news to share for all fans of Plague Inc. 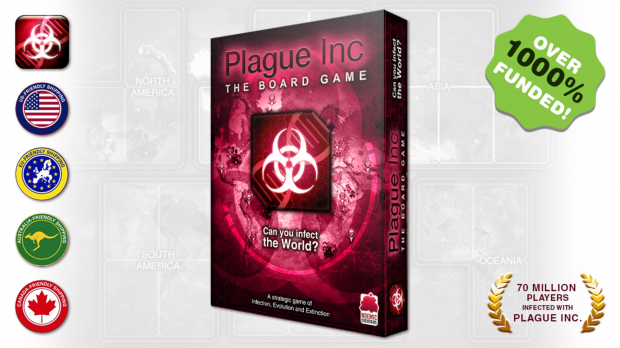 The first expansion for Plague Inc: The Board Game has infected Kickstarter!

Plague Inc: Armageddon is the first major expansion for the critically acclaimed Plague Inc: The Board Game. Infect the world with two radically different disease types (Bioweapon and Fungus), use powerful game-changing genes, deal with Brexit Britain and a whole lot more.

Get ready to laugh as global vaccination rates drop, cry as your friend evolves a particularly lethal strain of athlete's foot and cheer as your bioweapon devastates entire continents in a single turn!

Armageddon takes Plague Inc. to the next level, supporting new play styles, expanding strategic choices as well as adding more variety to an already extremely replayable game. It also lets you play with an extra player!

The expansion is fully designed and extensively playtested. Now we just need your help to get it manufactured. For all the details on Plague Inc: Armageddon, including what comes in the box, and how the new disease types work, check out the Kickstarter page here: www.plagueinc.com/armageddon

The Kickstarter runs until May 13 2019 so join us and support Armageddon now!

Ndemic Creations is a leading, independent game studio dedicated to making intelligent, sophisticated and ultra-high quality strategy games. It has achieved extreme success with its first game Plague Inc. - a global hit which is one of the most significant mobile success stories ever with over 120 million players and it continues to top charts worldwide today. Ndemic Creations is self-funded and based in Bristol, UK. It was founded in 2012 by James Vaughan (initially as a hobby!).