Paris, April 10th 2019 - Gameloft, leader in the development and publishing of games, is thrilled to announce the Caribbean Update is now live for Asphalt 9: Legends! 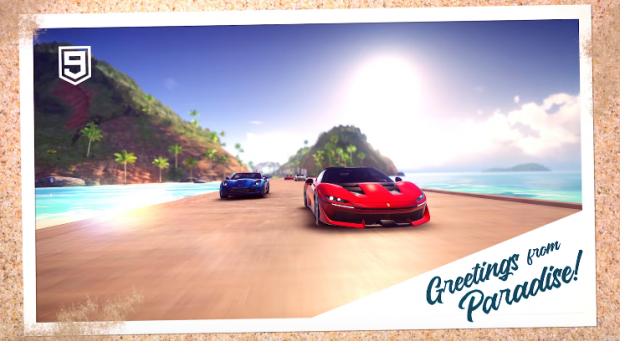 A sunny and stunning update, players will escape to the pure white sands and billowy clouds that surround this tropical paradise. Ten tracks in total are nestled within each corner of the island, and this new content has been incorporated throughout the Career mode, allowing all players new and old to visit this island paradise.

Furthermore, two new cars are now available, including the Mercedes-Benz SLR McLaren, a coupe jointly developed by Mercedes-Benz and McLaren, and the Lamborghini Aventador J, a unique cabrio car that was unveiled by Lamborghini at the 2012 Geneva Motor Show.

Finally, the Multiplayer hub has been upgraded to host more than one Multiplayer season at a time, allowing players to take part in the traditional multiplayer seasons and the Alternative Series with different league rules and events. Additionally, Asphalt 9: Legends' most exclusive hyper car, the Terzo Millennio will be unlockable as part of a 25-Day special event.

Now get in the sun and get racing!

Leader in the development and publishing of games, Gameloft has established itself as one of the top innovators in its field since 2000. Gameloft creates games for all digital platforms, two of which are featured in the "Top 10 iOS Games by All-Time Worldwide Downloads" from App Annie. Gameloft operates its own established franchises such as Asphalt, Order & Chaos, Modern Combat and Dungeon Hunter and also partners with major rights holders including Disney, LEGO, Universal, Illumination Entertainment, Marvel, Hasbro, Fox Digital Entertainment, Mattel and Ferrari.

Gameloft distributes its games in over 100 countries and employs 4,600 people worldwide. Every month, 114 million unique users can be reached by advertisers in Gameloft games with Gameloft Advertising Solutions, a leading B2B offering dedicated to brands and agencies. Gameloft is a Vivendi company.

All trademarks referenced above are owned by their respective trademark owners.