Pixel-art action platformer Haxor will be released on April 12th, 2019 for PC. Climou, the two-manned studio behind the game, wants to infuse the indie gaming scene with some true Eastern European retro gaming style. Haxor is reminiscent of the good ol' times of the Commodore 64. The game will be published by Fat Dog Games. 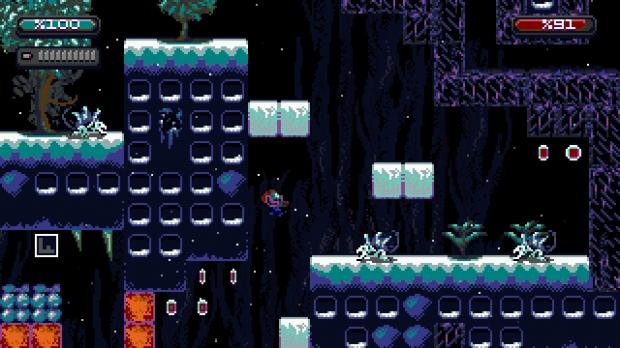 Haxor is an old-school 2D action platformer inspired by the greatest hits of the 80s and 90s. The game offers original pixel art graphics with 16x16 pixel sprites and ambient, flat 8-bit chiptune music which will enhance the experience so the players can feel the gaming vibe of past times. The players will take the role of Kla, a member of a research expedition on a mission to retrieve an energy source that could save her ancient race. Their vessel was sent straight into a black hole and Kla is the only survivor. Unfortunately, she lost all her memory - but this is only the beginning of her adventure.

Fast-paced and dynamic gameplay is the essence of the game. Kla will travel through four mysterious environments, searching for hidden secrets, collecting special items and facing deadly threats. She will have to fight a robust gallery of dangerous enemies and at the end of each stage she will have to defeat challenging bosses. But don't worry, our heroine will discover and develop a lot of special abilities that will help her overcome these obstacles.

Development started over 5 years ago. At first, it was just a contest entry on an internet forum. Since then the game has been through an incredible evolution, it's completely different from the initial build . We were inspired by independent creators such as Derek Yu, known for his Spelunky, or Konjak, the developer of Iconoclasts. I like to search for unique gaming concepts and try them out for inspiration, but I never copy them - comments Karol Pikor, one of the developers from Climou.

The two-manned studio Climou wants to infuse the indie gaming scene with a jolt of Eastern European retro-styled gameplay. Their game is Haxor, a platformer reminiscent of the good ol' times of the Commodore 64, which initially started as a contest entry, but their love for old-school gaming didn't allow them to stop there.

Polish video game publisher. Indie to the bone in a dog-eat-dog world. Helping small developers to get their games out to the public, even when it sometimes gets ruff. There's a lot going on in fat boi's kennel - Dream Alone, Exorder and Apparition are only a few of his favorite treats!