April 3rd 2019, Liverpool, United Kingdom - Ripstone Games, in collaboration with Lab42 and World Snooker, today announced that Snooker 19 is launching on April 16th for PlayStation 4 and April 17th for PC and Xbox One, right before the 2019 Betfred World Championships at The Crucible. Snooker 19 is available for pre-order from today on Xbox One platforms via the Xbox Games Store stores for $34.99. Snooker 19 will launch on Nintendo Switch later this Spring.

Add Snooker 19 to your Steam wishlist.

Developed by Leamington Spa based Lab42, Snooker 19 will feature 128 of the world's top players including Ronnie O'Sullivan, Judd Trump, Mark Selby and Ding Junhui as they take to the table at iconic venues including The Crucible and Alexandra Palace in countries across the world including China, and Germany. Enjoying the most in-depth simulation of snooker ever, players will be able to compete in every major tournament culminating with the World Championship in Sheffield, either in the robust single-player mode, local or online multiplayer options.

Developed with Unreal Engine 4, Snooker 19 is the most realistic snooker game ever created. Players can expect a full TV-style presentation in the game alongside evocative visual details of the players, arenas and equipment. Player likenesses have been meticulously created using 3D facial scanning technology while the subtle yet detailed wood grain of the cues and tables is rendered impeccably. With the glare of the spotlights reflecting accurately off the polished balls, Snooker 19 sets a new visual standard for the snooker video game. Players can soak up its atmosphere while the advanced physics and AI engines ensure the action remains tense, thrilling, and most importantly, true to real life. 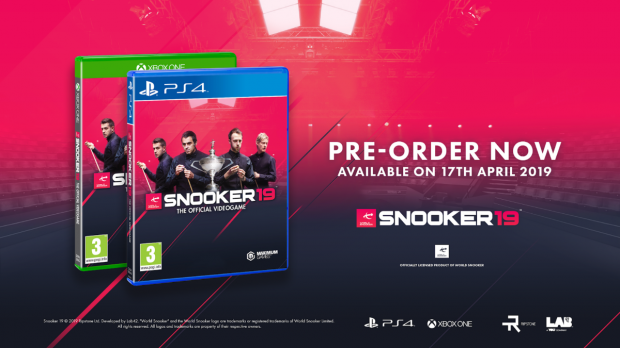 Kotaku UK - "Snooker 19 plays like the real deal: a great-looking recreation with an interface that can be used quickly, and all the modes any pot-fancier could ask for."

"We're delighted to share Snooker 19's release date," said Justin Forrest of Lab42, Game Director of Snooker 19. "The long wait for a new officially licensed snooker game is nearly over! The team here at Lab42 has put their heart and soul into this game and we hope gamers and snooker fans alike are looking forward to taking to the table when Snooker 19 launches on 17th April."

"Snooker 19 is a huge title for Ripstone. We have been working closely with Lab42 for two years, supporting them in any way we can to ensure that this will be the definitive interactive snooker experience." said Jamie Brayshaw of Ripstone. "Our partnership with World Snooker has enabled us to make Snooker 19 the most authentic snooker game to date, with access to all pro players and support syncing our online tournaments with the real-world snooker tour."