LONDON - APRIL 2, 2019 - New UK-based indie studio Whatboy Games have today announced that they will be unveiling their debut title at EGX Rezzed on April 4th, 5th and 6th. Gamers will be able to go hands-on with a fully playable demo of TRIALS OF FIRE on the 'Powered by Unreal' booth at the event to be held at London's Tobacco Dock. 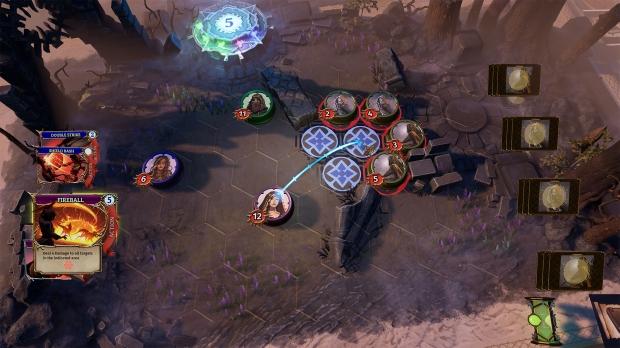 With the title set to launch into Steam Early Access in early May, fantasy fans at EGX Rezzed will be among the first to face down the threat of conflict and starvation in Trials of Fire, combining free-form exploration of an expansive open world, multi-character, card-driven combat and an innovative new fusion of loot, load-out and deck-building systems.

The tactical rogue-like design, procedurally generated game events and expanding gallery of playable characters and abilities challenges the player make every decision count as they journey across a dying world... in search of hope.

After nearly 11 years at Rocksteady Studios as Lead Gameplay Coder on all of the Batman: Arkham titles, Adam Doherty, co-founder and Game Director says, "Whatboy Games was founded to make amazing indie games, focused on repeatable gameplay loops with a AAA level of gameplay polish. As our first title, Trials of Fire stays true to this philosophy by offering exciting new combat mechanics wrapped up in a procedural, player driven story set within an original fantasy world".

Players will traverse an immense overworld map, choosing their heading and defining their own adventure as they embark upon a journey across a vast and varied wasteland in a perilous hunt for resources critical to the survival of their home settlement.

The draw of cards during combat presents new strategic options at every turn, challenging the player to take advantage of available card synergies by combining the unique abilities and the positional opportunities of their three heroes.

At any time between combat encounters, the player has the option of reassigning resources across their heroes and interchanging items and weapons in order to maximise the effectiveness of their party. Discovering one new Epic weapon could cause the player to rethink their entire strategy!

Trials of Fire also features an extensive range of narrative 'judgement' encounters where the player is challenged to weigh moral dilemmas in a lawless world, assuming the roles of judge, jury and (often) executioner.

Following 7 years at Rocksteady heading up Marketing and PR for the Batman: Arkham series, co-Founder and Studio Director, Dax Ginn says "Trials of Fire has been designed with intuitive accessibility for the player at the heart of its control system. It has also been developed with streamers and content creators in mind delivering massive depth of play with unique strategic opportunities for the player emerging on every run and a range of customisation features already in the game with more to come throughout Early Access".