March 28 2019 - Celebrating the first anniversary of the million-selling medieval roleplaying Game Kingdom Come: Deliverance, Warhorse Studios/Deep Silver proudly announce the Royal Edition for PlayStationÃƒ,Ã,Â®4, the Xbox one family of devices including the Xbox One X as well as Windows PC. Fans will get the unique experience of what has been one of the critically most acclaimed games of the year 2018 as of 28 of May 2019. The Royal Edition includes the base game in its enhanced version as well as all free and paid DLCs released so far. In addition buyers of the Royal Edition will get access to the upcoming "A Woman's Lot" content when it is released. 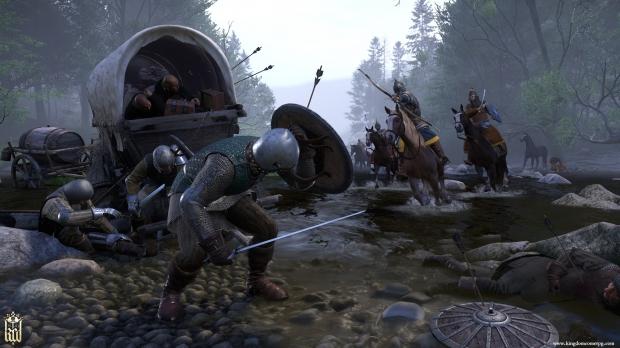 Celebrating the announcement, visitors of this year's PAX East in Boston are invited to get a closer look on the game and the last DLC Band of Bastards at the Deep Silver area (part of the THQ Nordic Booth).

All offers guarantee the full Kingdom Come: Deliverance experience including:

- Treasures of the Past

The Treasures of the Past unlocks unique treasure maps and additional in-game armour for Henry.

As the newly appointed bailiff players have to decide which structures to build first, how they want to attract people and how to settle disputes amongst the citizens. A bailiff's lot is hard for sure, but even he can enjoy some fun after a hard day's work. Taking one of the new horses for a ride, rolling the dice or just visit the local tavern - which he just ordered to be assembled - are just some of the activities that are introduced to the game with From the Ashes.

Amorous Adventures challenges players to help their friend Hans Capon. Hans is in love and he needs Henry's guidance to conquer the heart of beautiful Karolina. However, things turn out to be trickier than expected. A lost family jewel, a magic love potion and the most romantic poem of all promise many hours of new fun moments in Kingdom Come: Deliverance.

This add-on lets players accompany a group of mercenaries guarding the roads. Caught in a web of old, well fertilized hatred between Radzig Kobyla and another noble family they are hired to protect Radzig's realm. Players will join this group of troubling men, led by the notorious Sir Kuno Baron von Rychwald, not only to assist them, but also to keep them in line.

Details on the fourth and upcoming DLC which will feature Henry's close friend Theresa will be revealed at a later point.

More information to be announced soon.

The Music of Kingdom Come: Deliverance

Alongside today's reveal Warhorse Studios are releasing a extended recording of the latest Kingdom Come: Deliverance in concert. The video features the full 60 minutes of the Kingdom Come Soundtrack performed live by the Filharmonia Hradec KrÃƒÆ'Ã,Â¡love Orchestra in Prague.

For fans of the atmospheric music the full soundtrack is now available on Steam for purchase.

About Kingdom Come: Deliverance Kingdom Come: Deliverance is a story-driven open-world RPG that immerses you in an epic adventure in the Holy Roman Empire. Avenge your parents' death as you battle invading forces, go on game-changing quests, and make influential choices. Explore majestic castles, deep forests, thriving villages and countless other realistic settings in medieval Bohemia!

Warhorse was founded in 2011 by industry veterans Dan VÃƒÆ'Ã,Â¡vra, creator of Mafia and Mafia 2, and Martin KlÃƒÆ'Ã,Â­ma, formerly of ALTAR. Combined creativity of the experienced team gave birth to Kingdom Come: Deliverance - an open world, realistic, single player RPG set in medieval Czech Kingdom. It was successfully released on 13 February 2018 for PC, PlayStation 4 and Xbox One. The studio has 120 employees.https://warhorsestudios.cz

Deep Silver develops and distributes interactive games for all platforms. The Deep Silver label means to captivate all gamers who have a passion for thrilling gameplay in exciting game worlds. Deep Silver works with its partners to achieve a maximum of success while maintaining the highest possible quality, always focusing on what the customer desires.