SANTA CLARA, Calif., (March 15, 2019) - Leading video game publisher and developer, BANDAI NAMCO Entertainment America Inc., today released One Piece World Seeker for the PlayStation 4 computer entertainment system, Xbox One, and PCs via STEAM. Take control of Monkey D. Luffy, the protagonist of the worldwide hit One Piece manga and anime franchise, as he explores the vast Prison Island in an attempt to find his crew mates, help the island locals, and ultimately take on the Navy controlling the island. 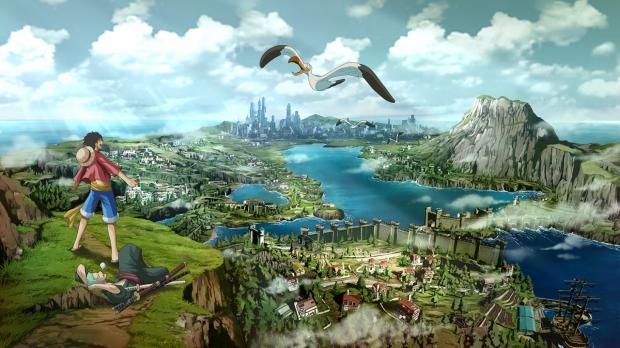 One Piece World Seeker is an all-new adventure for the fabled Straw Hat Pirates. Led by their captain Monkey D. Luffy, the crew finds themselves in hot water after a botched heist on Prison Island. Prison Island, formerly Jewel Island, known for its precious mineral deposits, has been occupied by the Navy under the command of Issac and has been turned into an island prison. Luffy must team up with the anti-Navy militia, a group of island inhabitants led by Jeanne, who wants to see peace return to her island home. Prison Island offers a diverse ecosystem for Luffy to explore as he fights to save his friends and take back the island for its people.

Throughout their adventure, players will be able to increase Luffy's move set by investing skill points into three skill trees. As players unlock more skills, Luffy will become more proficient in battle, mobility, and stealth. Luffy will also be able to perform special Haki attacks to clear out groups of enemies and deal massive damage to bosses. As Luffy fights, a tension gauge will begin to fill; if Luffy stops attacking, the tension gauge will begin to drop back down to zero. Multiple tension gauges can be filled to pull-off Luffy's strongest moves. Luffy can also use his unique extending Gum Gum ability to swing and glide across the island with speed and agility.

"One Piece World Seeker expands the scope of One Piece video games by injecting a wide open island for players to explore in addition to solid action-RPG gameplay," said Randy Le, Associate Brand Manager at BANDAI NAMCO Entertainment America Inc. "The single character focused gameplay allows the development team to create a much more cohesive story for casual and diehard One Piece fans to explore and enjoy."

One Piece World Seeker for the PlayStation 4 system, Xbox One, and STEAM is now available in the Americas with an ESRB rating of "T" for Teen. For more information about One Piece World Seeker or other titles from BANDAI NAMCO Entertainment America Inc., please visit; https://www.bandainamcoent.com, follow us on Facebook at https://www.Facebook.com/BandaiNamcoUS, or join the conversation at https://www.twitter.com/BandaiNamcoUS.