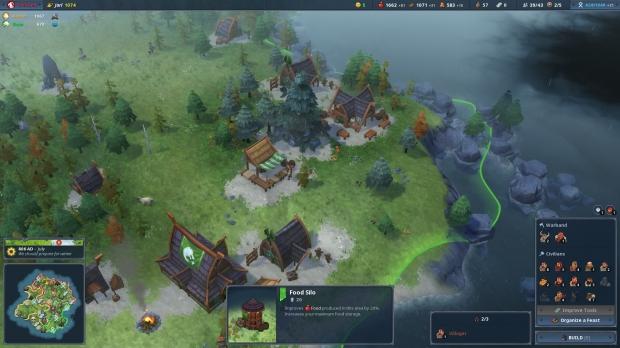 Key art and other new assets for Northgard: Relics can be found in our dedicated press room here.

The Vikings of Northgard have rediscovered the long-forgotten art of building Relics, powerful artifacts which provide great powers to the clans which construct them. Each clan can choose between 5 common Relics and 1 clan-specific Relic, with only one active at a time. These unique clan Relics hold great power, allowing the Raven clan, for instance, to call on Mercenary Giants on devastating raids or for the Dragon clan to summon an undead Jotnar.

Northgard: Relics also updates the tool mechanics, changing the way the all-important tools are created and used. Similarly, the Forge building has grown in importance, allowing players to upgrade it and assign three Smiths to craft items even quicker. The player now also has the possibility to upgrade civilian and military tools using the Forge, and to build a Relic in this updated building. Other functionality, including the ability to queue multiple items, has also been added.

More details on these new features and functionality of Northgard: Relics can be found in the patch notes.

Northgard was released on Steam Early Access on February 22nd, 2017 and quickly became one of the most popular strategy games on the platform, selling over 1 million copies. The game officially launched out of Early Access on March 7th, 2018, and was one of the highest-rated PC games to be released in the year, with a Metascore of 80.

More information can be found on the Steam, Facebook and Twitter pages. Assets are available in the press room here.

Shiro Games is an independent studio created by video games veterans Sebastien Vidal and Nicolas Cannasse in order to bring new innovative games to life. Based in Bordeaux, France, the small studio released their first title Evoland in 2013, with the acclaimed sequel Evoland 2: A Slight Case of Spacetime Continuum Disorder launching in 2015. Shiro Games released their popular Viking strategy game Northgard on Steam Early Access in February 2017, officially launching the game a year later, on 7th of March, 2018. The studio has also recently announced its new multiplayer action game, Darksburg.