December 21, 2018 (Beijing) - Yu Suzuki, be well known for the beloved series: Shenmue, showed his presence at a gaming showcase in China this weekend, officially announced Shenmue 3, as the latest sequel of Shenmue series, will enter the mainland China. Its Chinese PlayStation 4 version will be published by Oasis Games, meanwhile Simplified Chinese PC Version will launch on the WeGame Platform. 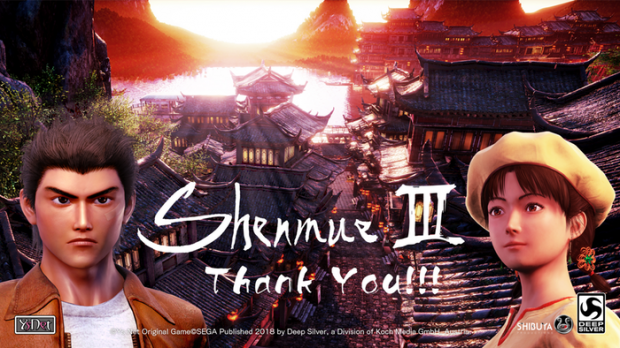 Shenmue 3, as the very first video game Kickstarter to be announcement at E3 news conference in 2015, Creator Yu Suzuki took the stage to reveal that Shenmue, which last appeared in 2001 on Dreamcast and Xbox, is about to come back to continue its open-world adventure featuring action elements and haunting beauty of storytelling.

Crafted by Studio YS Net under Unreal 4 engine, Shenmue III will conclude Ryo Hazuki's tale of redemption as he seeks to avenge his father's death in an open world, which starting in Guilin's Bailu village - shops, minigames and character interactions scattering, waiting for passionate fans to set foot in to explore the true drive of Shenmue 3's plot.

Shenmue 3 is the most-funded Kickstarter video game project of all time at 6.3 million, accumulated supporters more than 80,000. Despite the enormous fans appeal and outpouring of support on Kickstarter, Shenmue III sparked overwhelming passion and expectation in Shenmue series Chinese fans group since the initial announcement for Shenmue 3 in 2015 during E3. "I cannot thank enough for all enduring support," As Yu Suzuki shared with audience s during the interview time, "team is pursuing best, even beyond."

Shenmue 3 Chinese version is about to release in China late of 2019, more information will be revealed soon.