Rift Keeper is a roguelite platformer featuring rpg elements with a fast paced combat for PC.You play as the Rift Keeper, protector of the rifts that acts as a gateway to the other realms. After the Red priests summon you to the town, you learn that the rift keys have been stolen.You must uncover the ill intentions behind this; find the keys and whoever stole them before it's too late. 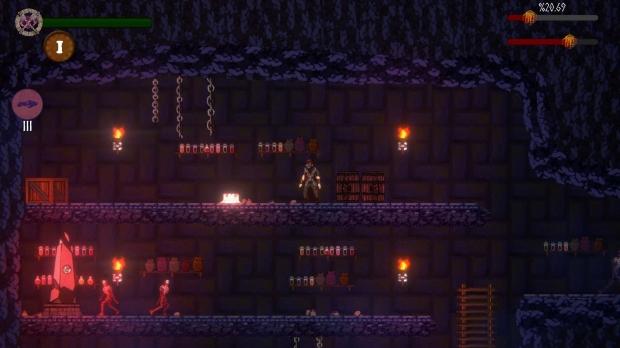 Rift keepers are the protectors of the rifts that acts as a gateway to other realms. They are warriors who are trained by the Red priests who were once Rift Keepers. When the Rift Keepers get old enough and lose their strength, they become Red Priests to teach the ways of the Keeper mother, study and learn more about the Rifts.Red priests and Rift keepers are the servants of the Keeper Mother whose the only light in the void that illuminates the true path for the Keepers and the arch-enemy of the Void and the Void God himself, Xal'Sheth.

Melee Weapons: There are 4 different melee weapon sets that the player can find and use. The main weapon is the Chain, it's a traditional Keeper weapon according to the lore and will always be with the Keeper. Halberd is a different one with a long reach and usually with higher damage output. There's also one-handed swords with usually higher damage but a shorter reach. The last one is a combination of sword and a shield, offering the player a chance to block some of the incoming attacks.

Ranged Weapons: There are five different ranged weapon sets that the player can use. Four of them are spells(Fire, Storm, Frost, Void) and the other one is a crossbow.

How the items work in Rift Keeper: As stated before there are over 120 items in Rift Keeper. They work as they usually do, you find a trinket you equip it and you gain the benefits of that trinket.

But there's one catch in Rift Keeper while giving player certain bonuses (damage, health or movement speed) most of the items also take something from the player. For example; you might have found a weapon that can crush your foes with devastating damage but on the downside, it can drain and lower your health.

Dungeons: There are 30 handcrafted dungeons, each of them offers unique look and atmosphere and crafted with care. There are also 3 different dungeons for the boss battles.

Dynamic difficulty system: As you progress throughout the game, enemies around you will also get tougher. Their health will increase by 1.25x while their damage output increases much more.

Frymore is an independent development studio founded by two friends. We've developed and released our first title in Firewood in 2017, an adventure game with horror elements.We are currently working on a project called "Rift Keeper", a roguelite game with RPG elements. Under the name of Frymore, we are just two friends who always have a big desire to improve ourselves and our games.

Efe (programmer) and Yanki (artist/composer) has known each other for 5 years. While they were both busy on their solo projects, one day they decided to work together and began developing their first adventure game "Firewood". Firewood was a short project and it took about 5 months to complete.

This was the first project they worked on for PC, and it went successfully in development and satisfied the team at the sale period. After the release of Firewood, they started working on a new project,a roguelite platformer with RPG elements called "Rift Keeper". Rift Keeper was a much bigger project compared to Firewood in all aspects and it took about one and a half year to complete for the team. Rift Keeper also had a booth at GIST2018 (Gaming Istanbul 2018) and WePlay Expo 2018. The game's ost artwork also selected for the DreamHack Atlanta and Sweeden's art gallery.