London, UK, December 2018 - Mixed Realms and Perp Games are delighted to announce a collaboration to bring the highly anticipated Sairento VR to PSVR in 2019. 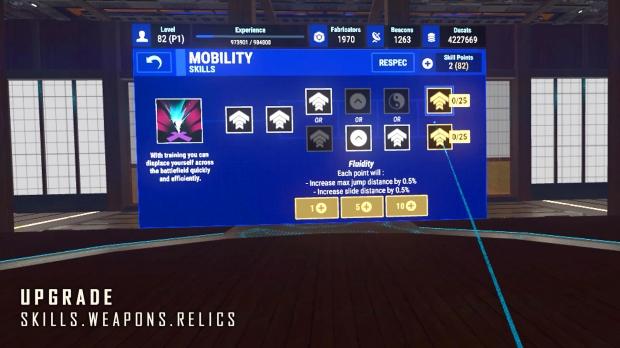 Already one of the most highly rated and best selling VR games on Steam, Viveport and Oculus, Sairento has a ready fanbase eagerly awaiting its release on the PSVR.

Popular for its strong cyber ninja theme, Sairento is currently the only VR game in which you can perform somersaults, multiple jumps, side flips, wall runs, and power slides as you hack, slash, duck, and weave through hordes of enemies.

Your arsenal of weapons includes katanas, guns, bows, kunais and throwing glaives which can be enhanced with powerful game-changing items called relics, to help contend against the ever-present cyber ninja threat.

With the ability to slow time down, you can perform artistic execution in one form or another to become the ultimate ninja badass.

In Sairento, you play a member of the Silent Ones - a group of seemingly ordinary people who practice the long forsaken code and martial arts of ancient samurais and ninjas to protect the weak, yet sworn to secrecy.

Sairento sees you explore and uncover the secrets of the organisation and those within it as you fight tooth and nail against those you once called allies.

Of the announcement, Aldric Chang, CEO of Mixed Realms says 'We are very pleased to have found a reliable partner in Perp Games to bring our game to PSVR gamers in the US, Europe and the Middle East. We are confident that with their strong repertoire, fans of Sairento will soon be able to get their hands-on a physical copy in retail stores in these countries. '

Sairento VR will be available digitally via the PSN store and will receive a physical release at launch of the game.

As the Perp Games 2019 lineup starts to take shape, Rob Edwards, MD of Perp Games says 'As one of the best-selling PC based VR games ever released, PSVR fans are in for a real treat. It is a great honor to release the Physical version of Sairento and to work with such a talented group of developers as Mixed Realms.'

Sairento PSVR will include a full campaign mode, as well as two challenge modes and randomly generated side missions. The side missions are playable solo or with up to 2 players cooperatively.

The critics are already glowing with praise for Sairento VR with Gaming Trend saying it's 'a must-have' and UploadVR describing Sairento as 'The Matrix mixed with Kill Bill'.

With high-rated scores across the board, PSVR owners are in for a real treat when Sairento launches in early 2019.

Mixed Realms is a Singapore based game development studio focused on developing unique IP, while crafting video games and virtual worlds for all kinds of gaming formats and platforms. Their first game - Sairento VR - became one of the best-selling VR games globally in 2017 and 2018. Sairento is highly regarded by the gaming community and critics, and is one of the very few commercially successful virtual reality games.

Perp Games is a Video Game Publisher whose aim is to help developers, in any way possible, bring extraordinary and exciting games to market.