Aquiris' acclaimed arcade retroracer releases today on Nintendo Switch and Xbox One debuting new features: custom paint jobs for all 32 cars, including 6 exclusive car skins on each platform, a new car and a brand new game mode called Playground. See more details about the new mode in the next video, published in collaboration with Nintendo Life: 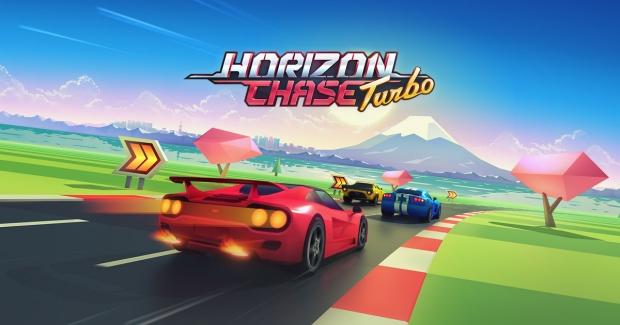 Playground is a rotative competition that present 5 new races each time. They are time-limited tracks that will always bring something special to the table: Time Attack races with no opponents, changes in weather and time of day, mirrored races, infinite nitrous, restrictions on which cars competitors can use.

Expect to see sandstorms in Iceland, volcanoes in California and new rules! You never know what the next season will feature.

Races come in one of 5 difficulty levels, meaning there's something for every type of Horizon Chase player. Each race presents two levels of challenge for Playgrounders to take on: beating the computer opponents may be a challenge in itself, but you can always take it up a notch and fight to climb the leaderboards. Each race has its own leaderboard, Global and Friends-only, that stay online only for the duration of a season.

In Playground mode, each season brings a new set of surprises and a new place to compete.

Besides the new Playground mode, Xbox One and Nintendo Switch players will be able to choose between several custom colors for each car, including 6 exclusive skins in each platform. The new version also comes with a brand new car carrying its weight in bragging rights.

Horizon Chase Turbo is a homage to classic 16-bit racers that defined a generation of high-speed and frenetic arcade fun like Out Run and Top Gear. The game is conceived to ignite an instant blast of nostalgia with catchy contemporary music composed by the legendary Barry Leitch (who also created the soundtracks for the Top Gear, Lotus, and Rush series), while also offering split-screen multiplayer and mixing retro low-poly aesthetics with modern gameplay.

"We are amazed by the feedback from the players and the press, and we worked hard to bring even more features and content to this launch on Nintendo Switch and Xbox One. We believe Horizon Chase Turbo is becoming that kind of essential game to play with your family and friends at home.", affirms Sandro Manfredini, Aquiris' Business Director.

The game main features include:

Steam Reviews for Horizon Chase Turbo have been incredibly good so far, with a glowing 97% positive of average score.

"Combining the same kind of fast-paced fun that worked so well years ago with a picture-perfect progression model, Horizon Chase Turbo is exactly the kind of arcade-inspired racing game the industry has needed." - 4/5 at Hardcore Gamer.

"I had a hell of a time with Horizon Chase Turbo. Of all of the retro revival games that have come out over the past few years, it is near the top of my personal list of favourites. I can't get enough of it." 8.5/10 - Destructoid

"The controls are incredibly easy, and it is actually hard to drive off the race track. There is no need to perform techniques, such as drifting around corners, as it seems to automatically do so on its own. However, as simple as the game and controls are, being a great racer and unlocking cars and tracks can be a little challenging." 8.7/10 - COGconnected

"Imagine if Outrun, F-Zero and Burnout 2 had a baby. If you want a really good fun, beautiful looking arcade racer, Horizon Chase Turbo is perfect for you, I would highly recommend it. I spent 90% of my time with it smiling ear from ear and gawping at the visuals. If, however, like me you set out to achieve all the trophies, please be prepared to scream a little." 8/10 - SquareXO

"With Horizon Chase Turbo, we want players to feel the nostalgic tension of the simple tug-of-war of a tight turn; where players are run off-road for a split second only to return to intense high-speed action as they overtake and battle against friends playing together on the couch or via the online ghost mode." Aside from the modernly retro graphics, the split-screen couch multiplayer modes are among Turbo's most defining features. All game modes, including the World Tour campaign, tournament and endurance challenges support local split screen multiplayer up to four players. Racers can compete in head-to-head races one at a time, or spend hours racing around the globe collecting coins to achieve the common goal of unlocking exotic vehicles and spinetingling tracks.