Taipei, Taiwan, November 19, 2018 - QNAP Systems, Inc. today launched the Mustang-200 dual-CPU computing accelerator card with 10GbE network connectivity (available with Intel Core i5 / Core i7 / Celeron processors). By installing the card in a compatible QNAP NAS' (or PC's) PCIe slot, users will essentially add two processors to their system for increased computing capabilities to provide a flexible performance boost to their IT infrastructure and applications. 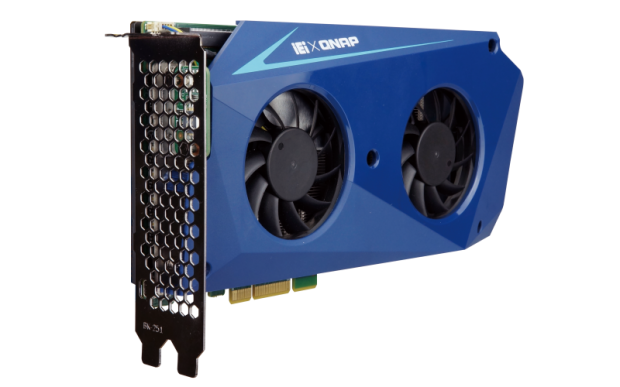 The innovative QNAP Mustang-200 computing accelerator card (PCIe 2.0 x4) features a dual CPU (including Intel Core i5 / Core i7 / Celeron) with Intel Graphics. By installing the card in the NAS, users can effectively increase the computing power and transcoding efficiency by the same power as two NAS. Each CPU on the card has a 10GbE network chip with independent IP, allowing users to connect to external networks using any network interface on the host NAS. Users can mount host storage space through iSCSI or VJBOD for the Mustang-200.

The Mustang-200 is powered by the intuitive and intelligent mQTS operating system and allows users to enjoy the same range of applications as seen in QTS. Users can install a variety of applications on-demand through the built-in App Center, import other app stores, or perform secondary development on the Mustang-200 to explore further application potential. The Mustang Card Manager assists in centrally managing all of the Mustang-200 (subsystems) installed in the host NAS. Users can monitor system status, configure network and storage resources, and connect to mQTS directly through the Mustang Card Manager for more detailed system configuration and application deployment.

The Mustang-200 is now available. For more information and to view the full QNAP NAS lineup, please visit www.qnap.com.