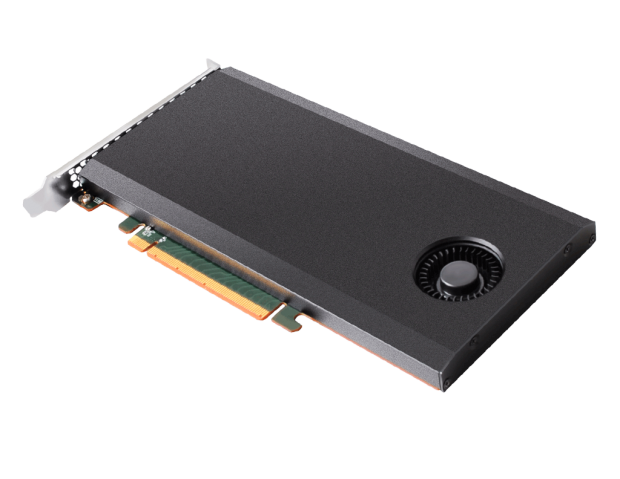 A Paradigm Shift for Workstation Acceleration

SSD7101 drives pack the power of a 20xSATA SSD RAID Array into a compact, stand-alone PCIe device that can be easily installed into nearly any type of workstation. This unconventional approach to NVMe storage represents a paradigm shift in the development of workstation acceleration solutions. Compact workstations can now tackle complex projects and workflows that were once exclusive to specialized hardware platforms.

HighPoint SSD7101 drives integrate Samsung's ultra-high performance 960 PCIe M.2 SSD series- the 960 PRO and 960 EVO - to deliver over 12GB/s of I/O (Input/Output) performance. With Samsung's high- density 960 SSDs, the SSD7101 series provides up to 8TB (terabytes) of storage capacity via a single PCIe 3.0 slot, and over 20GB/s and up to 16TB in dual-drive configurations. Available in up to 2TB capacity, the 960 PRO is one of the fastest and highest capacity NVMe SSDs on the market today. Professionals who want high performance and longevity from their high-end workstation can opt for the 960 PRO. Additionally, Samsung offers the 960 EVO SSD, available up to 1TB capacity, which is ideal for mainstream users looking for faster and more reliable PC performance.

Unlocks the True Performance of NVMe SSDs, Hindered by Onboard DMI 3.0

HighPoint's SSD7101 drive series unlocks the true potential of NVMe SSDs. Unlike onboard DMI 3.0-based NVMe solutions, which are forced to share a single PCIe 3.0 x4 lane with the motherboard's SATA and USB ports, SSD7101 drives feature dedicated PCIe 3.0 x16 bus bandwidth. This unique architecture allows the drive to interface directly with the platform's CPU, which provides PCIe x4 bandwidth for each NVMe SSD.

The HighPoint NVMe Management Solution's seamless interface was designed to accommodate applications that require transfer speeds exceeding 12GB/s, or capacities larger than 8TB. This simple and versatile storage solution can easily scale performance to match the requirements of each application.

A single SSD7101 series drive can aggregate up to four M.2 SSD modules at PCIe x16 bandwidth and 8TB of storage capacity, and double that when used in dual configurations, all at a price per GB comparable to that of traditional SATA SSD-based solutions.

High Performance with a Small Footprint

The SSD7101 series breaks free from the conventional storage solution concept, where the size of the storage footprint determines the solution's I/O transfer performance capability. Achieving 12GB/s transfer rates no longer requires complex arrays of 20 or more SATA SSDs, dozens of hard drives, and dedicated 3U or 4U rack mount chassis. All you need is a single SSD7101 drive and a free PCIe 3.0 x16 slot. Two SSD7101 drives and two PCIe slots can deliver over 20GB/s. SSD7101 drive solutions deliver an unbeatable combination of performance, capacity and cost in a compact, stand-alone PCIe device.

SSD7101 NVMe Product Series - Test units will be available at the end of May and mass production / shipping is planned for early July 2017.